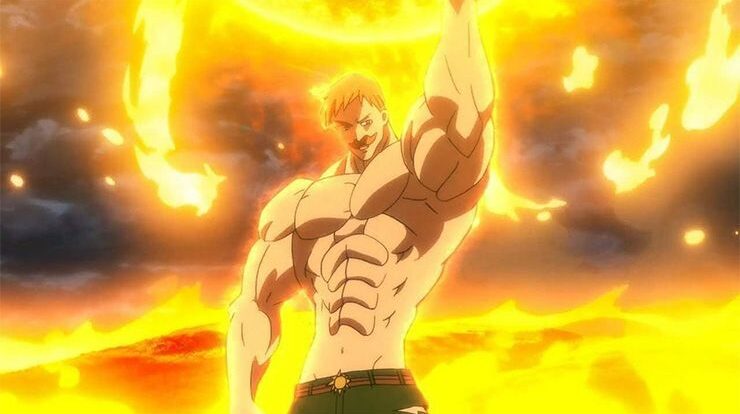 If we think about the amount of absurd power that usually has around, the merit of the guys increases even more! You have to be really good to spend years, sometimes even centuries, I don’t know, without having lost a single fight. Some may lose these statuses as the story progresses, but most are still there, going strong. And I’m here to show you these guys, check it out:

In Hellsing, I imagine you already know that Alucard is a vampire, that he’s a very thick-skinned character, the guy is overflowing with shots and he’s still alive, and in this anime, vampires are immune to virtually any conventional weapon. Firearms, none of that works with them, and the only exception is sanctified, blessed things.

Knowing this, Alexander Anderson of the Iscariot tried in every way to defeat Alucard and failed miserably in all of them. The guy simply appealed to a thorn from the crown of thorns that Jesus Christ wore when he was crucified, so you can see that.

But even that wasn’t enough, he ended up defeated by Alucard anyway, and Alucard ended the story without being defeated by absolutely anyone, completely undefeated.

Among all the representatives of the Joestar family and relatives that we know throughout the anime, Giorno is the only one who has never been directly defeated by anyone.

And it’s easy to understand that when we look at his ability, the famous and feared Gold Experience Requiem, which basically transforms any item into a living being, look at the many possibilities that this power allows, it’s really to make the guy invincible.

Okay, some people might argue that Giorno already lost to some Stand users, but in the end, his team along with Bucciarati, ended up winning, so there’s no way, Giorno remains the only completely unbeatable character in JoJo’s Bizarre Adventure, in all times, in all the arcs that the anime has had until today.

3. Escanor From The Seven Deadly Sins

Guys, you noticed that this list is only getting better, right? Anyway, let’s continue. At least during the day, Escanor, the Sin of Pride in Nanatzu no Taizai, is invincible. And he’s really invincible, he’s never been defeated in direct combat, and the Sunshine technique is one of the most feared in the entire anime.

During the night, things change, ok, we know he weakens, anyway… but during the day, ah, during the day it’s impossible to beat Escanor. Villains like Galand and Estarossa are there to prove it, as is the corrupted version of Meliodas, who also got shaken up by the prince.

Escanor has been seriously injured, but never in direct battle, and even when he fails, as in the case of the Demon King fight, you can’t say he lost, or was defeated.

4. Levi Ackerman From Attack on Titan

In Attack on Titan, everyone agrees that Levi Ackerman is the greatest of Paradis’ soldiers. The guy didn’t miss a single one, and all the missions he received were fulfilled, with allies being saved and things going exactly as they should.

Levi defeated who knows how many Marley soldiers, created an absurd rivalry with Zeke Yeager, and defeated him countless times as well. There was the one where Zeke detonated a thunder spear, and also the fight against Erwin, but even so, he was never completely defeated, he was never defeated in a battle or mission, the guy is the brave of the brave in Attack on Titan.

It’s not just anyone who can be the most famous and respected hero of all, and that’s exactly what All Might is in My Hero Academia. He was never, ever defeated, and retired after many years of service, having even ended crime in Japan by the time he was in his life.

It’s amazing that even after, without One For All’s chirl powers, he continues to help as he can, and was still a great mentor to the next generation, including the likes of Izuku Midoriya, Katsuki Bakugo and several other students at UA Academy. Of course, in some training sessions at school he was defeated by the students, but that doesn’t count for the guy’s overall score, right? Gotta respect All Might!

Hunter x Hunter is a story of extremes, and a great example of that is the nice old man Isaac Netero, the president of the Hunters Association, and one of the best hunters the world has ever seen. He is a very powerful nen user, and spent many years of his life waiting for someone who could offer him a decent, balanced fight, because he always beat anyone very easily.

That happened and it was kind of his only defeat, which to be honest is not defeat: Netero’s dreamed fight happened against the king of the Chimera Ants, and he died in that fight, but it wasn’t exactly a defeat. It’s just that to defeat Meruen, he needed… listen to what I’m going to say now, he needed to detonate an atomic bomb he had inside his body.

Seriously, the guy had an atomic bomb in his body, and of course he won the fight after that, there’s no way! Even losing, Netero remained undefeated and died like this, without being defeated once!

7. Shanks From One Piece

There are many highly respected pirates in One Piece, but perhaps none are more respected than Shanks the Red. He appears little in history, but whenever he appears, he is greatly feared. Shanks is one of the Emperors of the Sea, the so-called Yonko, so much so that he inspired Luffy to become a pirate and the truth is that no one knows much about him.

The fact is that when he arrived at the famous battle of Marineford, the two sides stopped fighting, because the guy had arrived, that’s how much respect everyone has for him. Has Shanks been hurt, yes, by Blackbeard and one of the sea kings, but really defeated in battle? Never, he never was, and to tell the truth it’s kind of hard to think about.

Now tell me any character you remember, from anime, who also never lost a fight? Of course not worth Saitama, right.

That is it from today’s post on Top 7 Anime Characters That Never Lost A Fight. If you do not agree with the points in the post and have some of your own opinions, share them with us in the comments section down below. Keep visiting Animesoulking for more information about Anime and Manga.

Chandan is the writer of “Top 7 Anime Characters That Never Lost A Fight”. Also, Connect with me on YouTube and Facebook.