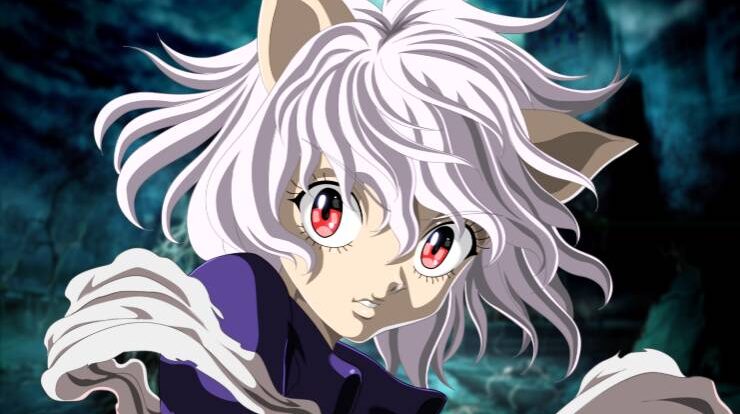 Zazan was a squadron leader and was likely the strongest ant besides The King and The Royal Guards. She possessed incredible speed as we saw in her battle against Feitan. The latter is the fastest member in the phantom troupe but Zazan was able to keep up with him throughout their battle ( which was mostly a battle of speed), blocking and evading majority of his attempted blitz. She only become slower after transforming but still managed to catch him off guard and injure him.

Feitan is the fastest phantom troupe member by feats, fast enough to attack his opponents before they can react and able to create after-images of himself. The other members of the troupe had difficulty tracking his battle with Zazan, and although Zazan was actually a match for his speed throughout their battle, it was stated that he was still rusty and not at his full physical capacity. He kept getting faster throughout the battle and before he could get to full speed Zazan had already inflicted a lot of damage on him giving him no choice but to use the rising sun.

Tsubone showed that she could keep track of Godspeed Killua albeit slower, with her normal speed ( this was initially without nen). Using her nen bike ( where she transformed herself into a bike, and using her aura as fuel) she became many times faster, forcing Killua to change direction. Her main forte however would be in a race. When it comes to battle she will likely not be able to handle the speeds of those ahead.

We saw Pouf’s speed against Killua. His flying speed was immense and he was only slower than Killua’s whirlwind. This was with just one-fifth of his full power. At full power he would be even faster although he wasn’t sure if he could catch Killua even with all his power in place. Still, this goes to show us that at full strength, he would be much faster and would likely be on par or faster than Godspeed Killua’s actual travel speed but Killua will still be ahead in overall speed.

Cheetu was a natural speedster. It was his main forte and what put him ahead of his opponent. Without his speed it would be fair to say he’s weak. Both his travel speed and reactions are top notch fast enough to travel hundreds of meters in seconds and possessing reactions enough to dodge bullets at point blank range and cut off peoples fingers before they even realize what has happened. Because he’s already too fast, he doesn’t even bother himself trying to use nen to enhance his speed.

Killua is among the fastest characters in the series when using Godspeed. With Godspeed both his travel speed and reactions are significantly increased. His travel speed increases tremendously although not nearly as much as his reactions. In Godspeed he uses whirlwind which gives him nigh instant reactions enough to completely blitz Youpi and burn off Pouf’s face. Pouf will say that even at full strength he wasn’t sure he will be able to catch Killua. Many can keep up or even surpass his travel speed but as shown his overall speed in battle is what puts him this high.

Pitou’s travel speed can only be matched by few in the series. When he was first introduced, he used about 2 seconds to travel over a kilometre to get to Kite. The same happened when he was pushed away by Netero’s Buddha, replicating the same feat as earlier, he used a couple of seconds to get to the palace from over a kilometre away. This travel speed far surpasses that of Tsubone’s nen bike, and those of Cheetu and Godspeed Killua. He mainly uses this speed when he’s ready for battle and activates Terpsichora. Not only travel speed but his senses, reactions are enhanced to an incredible level enough to follow Netero’s hand movements although unable to predict where he would attack.

Gon in his transformed state didn’t only gain immense aura and strength but his speed was also on another level. When Pitou first attacked using his fastest speed Gon easily evaded and in the blink of an eye was already outside waiting. All this took place before Pitou realized what had happened. Pitou will attack again from blind side but Gon will still easily dodge the attack and before his kick on Pitou’s gut, it was as if time had slowed which goes to show how the incredibly fast Pitou was outclassed even in speed. I personally think he’s faster than Pre-Rose Meruem and only slower than Netero’s hand speed and Post-Rose Meruem.

When we say Netero is fast we are mainly talking about the speed of his hands to form (the prayer motion). We know nothing about his travel speed which will likely be slower than majority in this list. The speed of his hand movements however is said to surpass the speed of sound. Even the incredibly fast Meruem (before the rose bomb) himself stated that Netero’s hand movements is the only thing that far surpasses his speed. Meruem had to find openings to inflict damage on him. Even if you’re able to follow his movements, you probably still wouldn’t be fast enough to dodge as we saw with Pitou.

Meruem before the nuke was already very fast and only slower than Netero’s prayer and most likely Adult Gon. After consuming Pouf’s and Youpi’s aura however, he became many times faster and in an instant could cover a very long distance. From hundreds of meters away, he got to Knuckle and Meleoron in an instant (as though he had teleported) and knocked them unconscious. This speed of his should decisively outmatch even Netero’s hand speed.

That is it from today’s post on Top 10 Fastest Hunter x Hunter Characters. If you do not agree with the points in the post and have some of your own opinions, share them with us in the comments section down below. Keep visiting Animesoulking for more information about Anime and Manga.

Chandan is the writer of “Top 10 Fastest Hunter x Hunter Characters”. Also, Connect with me on youtube and Facebook.