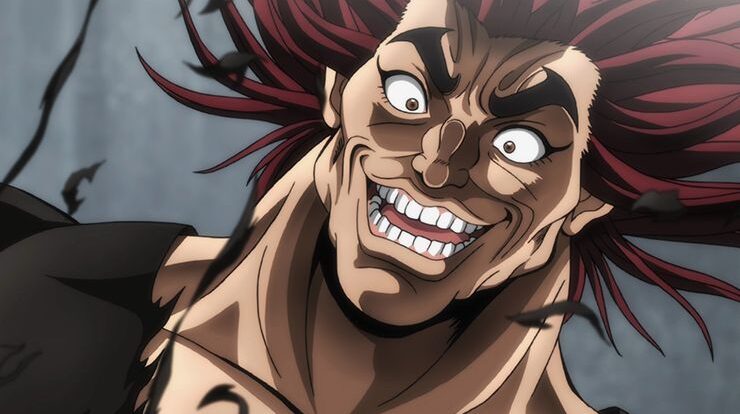 This place goes to Mr. Unchained, Oliva Biscuit. As much as I hate to say it, I must admit that Oliva is no longer the monster he used to be. In his last few appearances he has been defeated by his opponents and is no longer on Yujiro’s level.

In fact, the ogre easily subdued him the last time they met. In their last fight, Nomi easily humiliated and knocked him out. But well, despite all this, Oliva is still one of the strongest men. I don’t think it’s necessary to remember all his feats since he is one of the best known characters of the series. Probably his debacle is due to the passing of the years.

You also have to remember that he has not been interested in learning a new martial art, he only relies on his physical strength and that has been his biggest mistake. The good news is that he reappeared in chapter 138 of the manga. I hope he gets the respect he deserves this time.

Next on the list is sensei Shibukawa. This guy hasn’t had much action, but certainly his fight in the sumo tournament showed us that he’s still a tough guy. He’s one position above Oliva Biscuit because I consider him the perfect counter to the unchained.

Oliva is a man of brute strength and Gouki has a technique that counteracts his strength, we already saw that he was even able to overpower Nomi without much trouble using his Aikido technique. I think Gouki could beat Oliva Biscuit in a fight.

Of course, that’s assuming Biscuit continues to use only his physical strength. His fight against Jack Hanma was one of the best in the series and I don’t think we’ve seen the full potential of this guy yet.

Next in the ranking is the indestructible Hanayama. This guy is still among the top 10 strongest thanks to all the feats we have seen him do. He fought the legendary swordsman Musashi Miyamoto and managed to give him a good fight.

And we can’t forget his brutal fight against the criminal Spec, that fight was one of the wildest in the series. In an episode of Scarface, Hanayama confronts a shark and defeats it using his bare hands, this guy should no longer be considered human.

Next we have the guy who defeated the indestructible Hanayama, Katsumi Orochi. Katsumi has shown that he has a lot of potential. For now he has yet to fully master Chinese martial arts. So I will leave him in this position for now. After having Retsu’s right arm implanted in his body, Katsumi was able to use the same Chinese Kenpo moves that Retsu was able to do when he was alive.

His kicks and punches at the speed of sound are his most lethal weapon. He is also a karate master who now possesses Chinese martial arts. If he continues to get stronger he will probably scale several places in the rankings. For now he has yet to fully master Chinese martial arts, so I’ll leave him in this position for now.

I’m going to add Retsu to the list because even though he is no longer part of the main story. In the spin off, Retsu has shown that he has evolved as a fighter. Retsu is not just a fighter, he is now able to take on magical creatures such as ogres, goblins and dragons. In the Baki series, Retsu had always been one of the strongest fighters, unfortunately he had to face Musashi Miyamoto.

I’m not going to talk much about his skills. We all know that he is a master of martial arts and, from what we have seen in the spin-off series, he has become much stronger than before. He is definitely a character we will miss in the main series.

At number 7 in the ranking is the tiger slayer, Doppo Orochi. The sumo arc has been a good moment for the god of war, we have seen him rise from the ashes. Doppo had had little participation and was being a bit forgotten, however with the sumo arc we could see that this guy is still one of the strongest men in the world. Doppo improved his karate and continued to get stronger.

His match at the sumo tournament showed us that he continues to improve each of his techniques. Also, in his most recent fight, Doppo totally humiliated Kehaya, the guy who made it out alive when he faced Yujiro Hanma. Doppo is one of the most relentless characters in the series.

Although he seems like a nice guy, he’s the last man you’d want to face. Among his greatest feats is the time he managed to fight on the level of Yujiro Hanma.

The sumo god is in sixth place. Nomi was the main antagonist of Baki dou. This guy is probably the character with the most haters in the series. Among his feats is having turned coal into diamond with the pressure of his hands. He has the strongest grip only behind Yujiro Hanma. And let’s not forget the time he beat Oliva Biscuit, at that time all the fans were in shock.

Some applauded him and some hated him for it. However, it must be admitted that Nomi is an elite fighter, his defeat against Jack was due to his overconfidence. In fact, Jack himself admitted that if Nomi had had the little finger, he would have taken the win.

Jack has had a couple of stumbles in his life. This guy was losing his way and forgetting the goal he had worked so hard for. Jack became obsessed with getting stronger and underwent many surgeries, but this made him forget to train his most important muscle, “his brain” Well, it seems he has been working on it and made a flawless comeback earlier this year.

Jack defeated the number 6 in this ranking. Nomi and Jack had the best fight of the sumo arc, this was a fight that made fans regain their love for the series. And well, if you defeat the bad guy you automatically take his place. Jack is a fighter who has a somewhat peculiar fighting style; he fights using bites. He is also a skilled at street fighting.

He defeated Nomi almost effortlessly and that was because this time he was able to use his brain and calculate his opponent’s every move. This shows us how smart he has become as a fighter.

Pickle remains one position up in the rankings for the simple fact that he has not been defeated by Jack. Some would argue that Jack could currently defeat Pickle, but until that happens, the caveman will remain above Jack. Pickle is a fighting machine, what makes him more dangerous than the others on this list is the fact that he doesn’t fight for fun.

For Pickle it’s a battle of prey versus hunter, it’s a fight for survival, that makes him very dangerous. Technically he hasn’t been defeated in combat yet, it’s true that Musashi made him run away but I wouldn’t count that as a defeat. Baki couldn’t defeat him either so for the moment no one has managed to knock out the prehistoric caveman.

Well, I give Baki this place in the ranking for reasons I will explain later. His greatest feat has been enduring a long fight against Yujiro Hanma. Baki even made his father feel pain, something the ogre admitted to not feeling for a long time. Baki is a guy who never stops training and his strength only increases day by day.

Since Yujiro is no longer considered human, we can say that Baki is the strongest man alive on earth. This guy would be able to beat most of the men on this list. He has not had much prominence in Baki dou manga, but he has made it clear that he is still training and getting stronger.

Most of you will probably disagree with me, but well, in my humble opinion, Musashi is the second strongest man the Baki series has ever had. The fact that Itagaki had to take him out of the series in such a crazy way tells us that this guy was too broken that even the creator of the series didn’t know how to defeat him in a coherent way.

His defeat at the hands of Motobe always seemed to me to be symbolic, nothing more. If we remember correctly, he got up as if nothing had happened after the fight and Motobe was the one who had to go to the hospital. Musashi is one of the few men who made Yujiro smile with joy. The ogre considered him a worthy opponent and was willing to take the fight seriously.

But well, we all know how that fight ended. His fight against Baki is something important to give him this position in the top.

The first place was obvious, after all what hasn’t already been said about this guy? The strongest creature on earth, a guy able of stopping an earthquake in one hit.

Yujiro has no problem withstanding a direct lightning strike, I wouldn’t doubt that he would also be able to swim in boiling water if he wanted to. Currently it is unlikely that anyone will be able to defeat him in a fight and the reason is simple; he keeps getting stronger with each passing day, even while he sleeps the hanma blood keeps working. This guy is getting thicker and looks like he has muscles even in his ears.

I don’t know what to tell you about Yujiro. The man can stop earthquakes with one punch and can also stop projectiles with one finger, the ogre is too overpowered.

An honorable mention goes to the emperor of the sea, “Kaku Kaioh”. The reason I have not included him in this top is because we have only seen him fight once and it looks like it was his last fight. I believe Kaku is now retired, and the other fighters in this top have continued to improve their skills.

That is it from today’s post on Top 12 Strongest Baki Characters Ranked. If you do not agree with the points in the post and have some of your own opinions, share them with us in the comments section down below. Keep visiting Animesoulking for more information about Anime and Manga.

Chandan is the writer of “Top 12 Strongest Baki Characters Ranked”. Also, Connect with me on YouTube and Facebook.