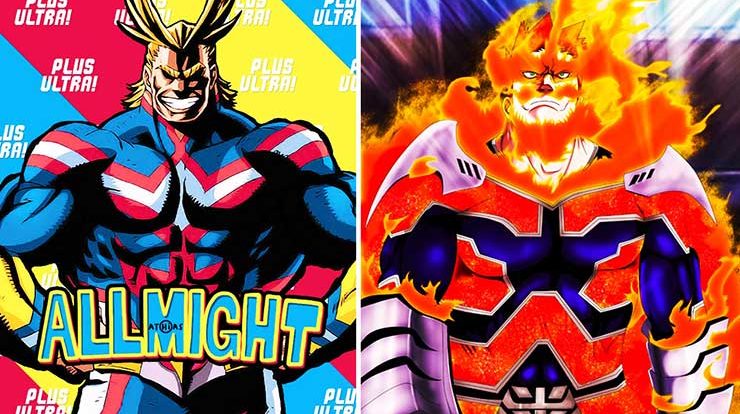 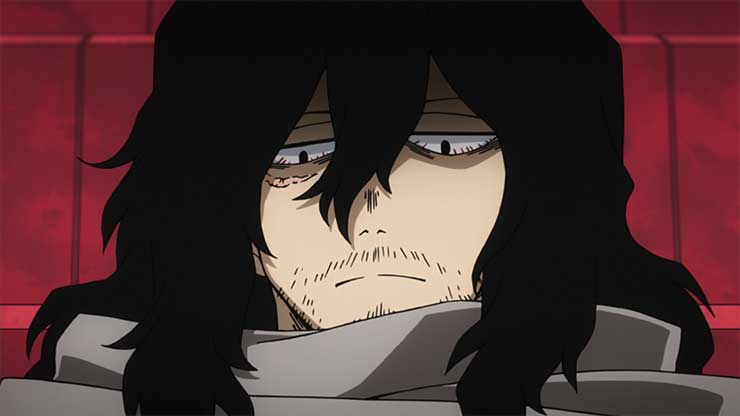 Shota Aizawa, also known as the Erasure Hero: Eraser Head, is a Pro Hero and the homeroom teacher of U.A.’s Class 1-A. His quirk is erasure which gives him the ability to nullify anyone’s quirk by just looking at them. Overall he is a strong individual. 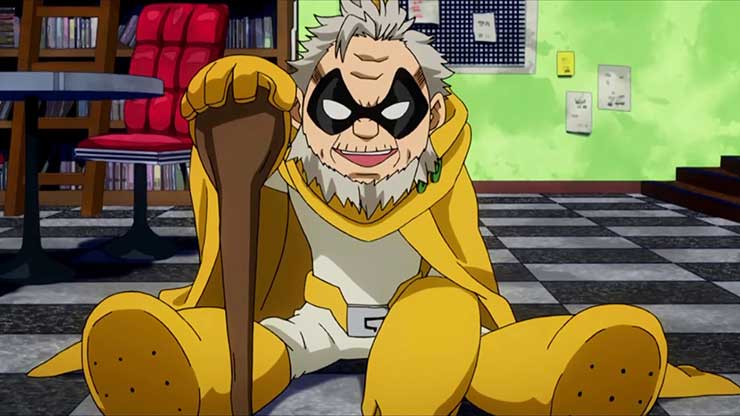 Sorahiko Torino, also known by his hero name Gran Torino. Torino is a retired pro hero and a mentor to all might and Izuku midoriya. Due to his age he’s bit underrated but few people in the series can deal with his speed which is his main weapon and it allowed him to blitz on of the nomus. He received praise from endeavor despite his age. 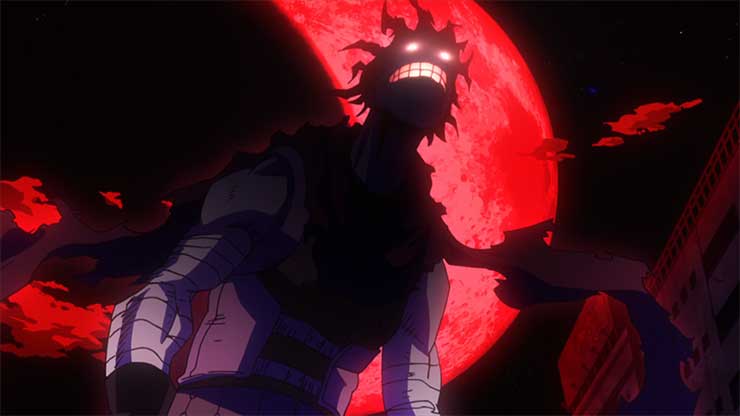 Chizome Akaguro, also known as Hero Killer: Stain. Stain is an extremely powerful villain and able to murder 17 known Pro Heroes, and cripple 23 others to the point of being unable to make a full recovery. He is extremely fast as easily overpowered tenya who are considered to be U.A’s fastest student. His quirk is Bloodcurdle which allows him to paralyze his opponents by ingesting samples of their blood. 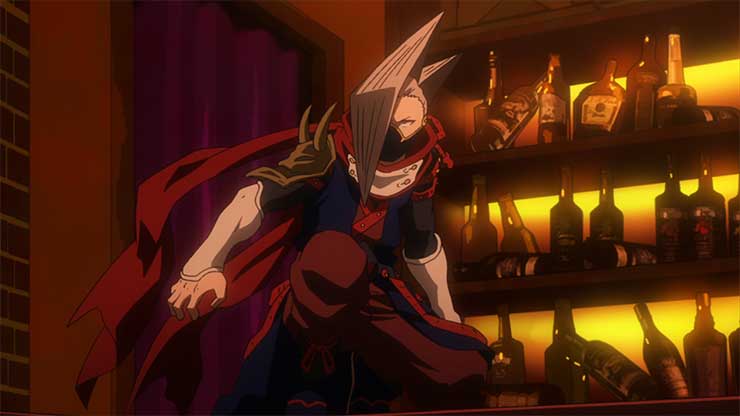 Shinya Kamihara, also known as Ninja Hero: Edgeshot. Edgeshot is the the no 4 pro hero and his quirk is “Foldabody” allows him to manipulate the thinness of his body and stretch his limbs. He is able to flatten and twist himself into a pointed string and then pierces his opponent before cutting off their blood flow and knocking them unconscious. 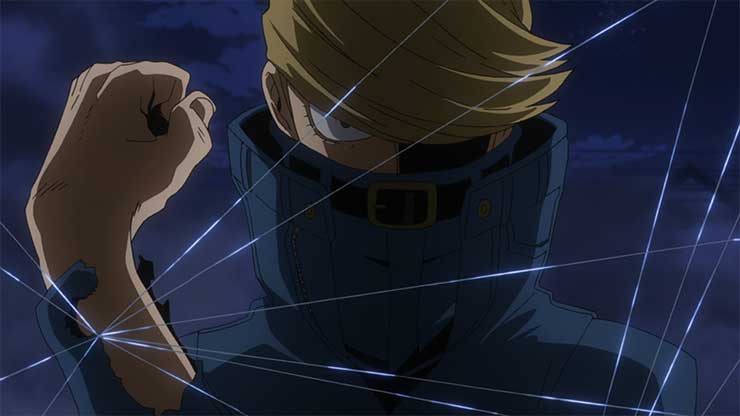 Tsunagu Hakamata, also known as Fiber Hero: Best Jeanist, formerly the no 4 pro hero but now no 3. His quirk “fiber master” allows him to manipulate fibers at will as long as the person is wearing clothes. He can turn part of his clothes into fabrics which he uses to bind targets and he can manipulate his threads to move very fast, far, thin enough to be nearly invincible and strong enough to easily bind even nomus. 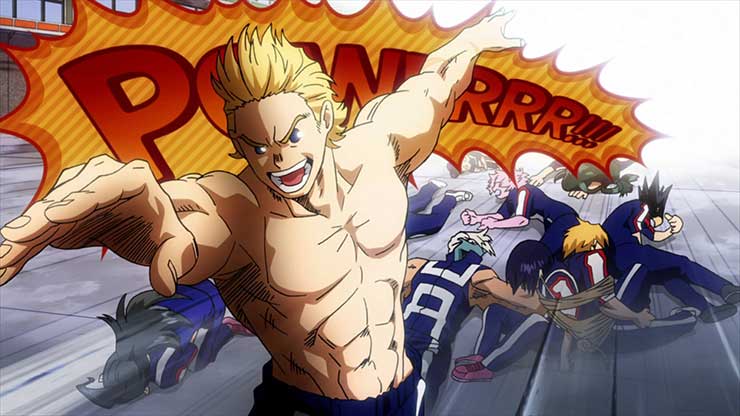 Mirio Togata , also known by his hero name Lemillion, is a student in Class 3-B at U.A. High School and is part of the big 3. Initially the candidate to inherit one for all. His quirk “Permeation” allows him to become intangible, letting him travel through solid walls and the ground, while letting enemy attacks slip through him. He easily overpowered 18 out of the 20 students of Class 1-A. 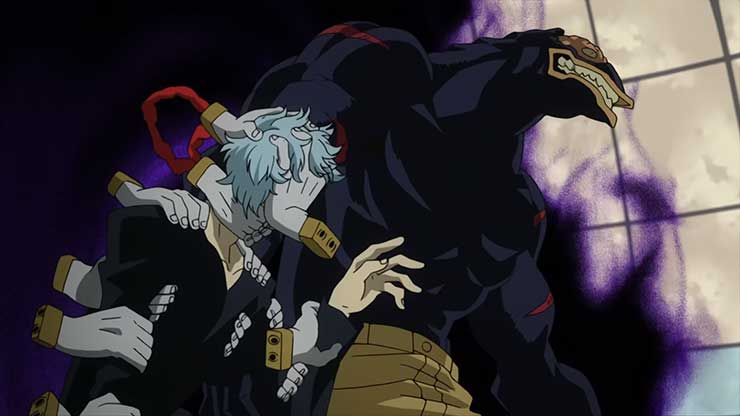 The U.S.J. Nomu is an artifical human and was a member of the league of villains,who was one of the main antagonists of the USJ arc. He possessed two quirk Shock Absorption and Super Regeneration. Shock Absorption allows him to to absorb the shock of any attack to a certain level and regeneration to regenerate anything,from injuries to limbs .He was powerful enough to force all might to go beyond 100%. 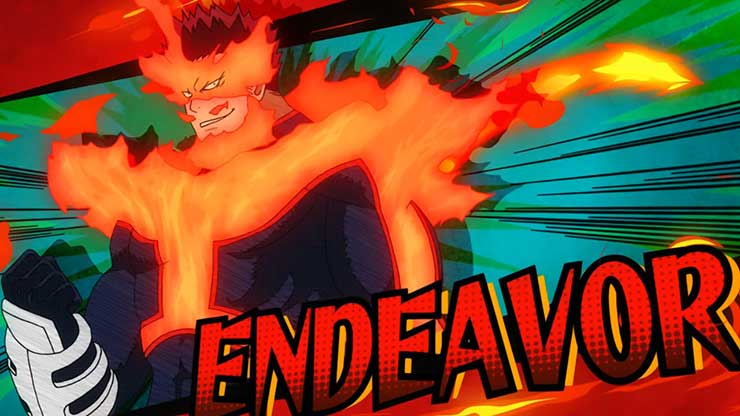 Enji Todoroki , also known as Flame Hero: Endeavor.He is the pro hero with the highest tally of resolved cases in history.Initially the no 2 hero for a long time but after all might’s retirement,he took the latter’s place as no 1 hero. His quirk “Hellflame” allows him to produce and manipulate fire at will. He could take on and defeat several nomus without sustaining any damage, for which he was praised by the likes of even all for one. 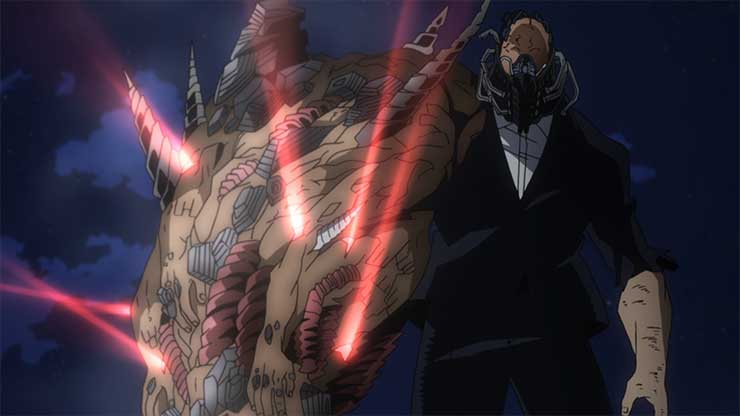 All For One, real name Shigaraki is the true leader of the league of villains and the central antagonist of the series. His quirk “ALL for One” allows him to steal people’s quirk’s and renders them his own.He can even combine his stolen quirks to create novel attacks with devastating effects. He was strong enough to go to-to-toe with all might 2 times and despite losing he pushed the latter to give everything. 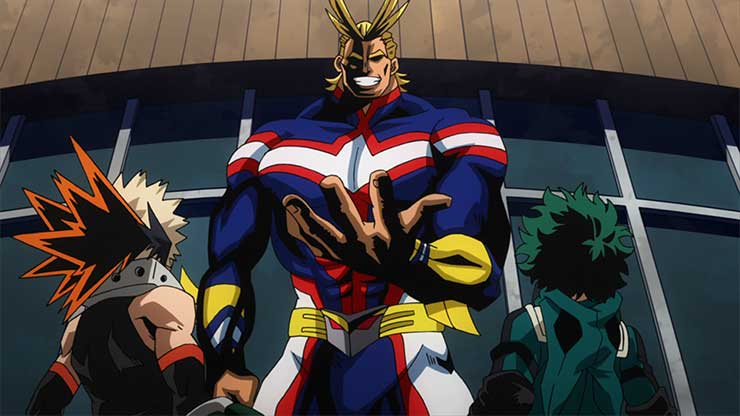 Toshinori Yagi, more commonly known by his hero name, All Might. He is the former no 1 hero who bore the title of the world’s symbol of peace. His quirk “One for All” gave him access to nearly unlimited, stockpiled power. By channeling this power through his body. All might had superhuman strength, speed, agility, as well as invulnerability. He defeated all for one 2 times and his level is yet to be reached by anyone.

That is it from today’s post on Top 10 Strongest My Hero Academia Characters. If you do not agree with the points in the post and have some of your own opinions, share them with us in the comments section down below. Keep visiting Animesoulking for more information about Anime and Manga.

Chandan is the writer of “Top 10 Strongest My Hero Academia Characters”. Also, Connect with me on youtube.