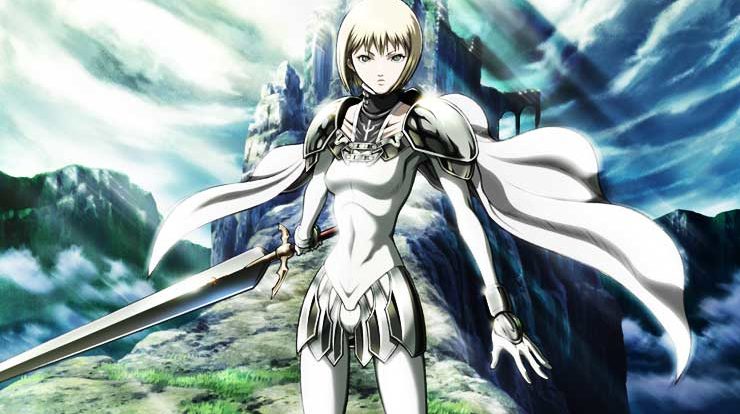 In the floating continent of Neo Verona, The Montague family seized control and murdered every member of the family with the exception of Capulet’s daughter, Juliet Fiammata Asto Capulet. 14 years later, Juliet and the remnants of Capulet’s retainers live hidden from the iron fist of the Montague family. Juliet has long forgotten the murder of her family or her identity, and cross dresses as Odin and the town’s hero of justice, “Red Whirlwind”. A sudden escape in her daily escapades leads her to meet Romeo Candorebanto Montague, The kind son of the Tyrannical Montague. Destiny has been set as these individual soon to be “Star-Crossed Lovers” are cruelly toyed with by fate in the midst of war. Loosely based on the play by William Shakespeare.

In a world Rife with deadly creatures called “Youma”, A young silver eyed women, Clare, works on behalf of an organisation that trains female Youma Half-Breeds into warriors with the ability to destroy these creatures. Considered a rogue for picking up a stray child and almost losing herself to her Youma side by “Awakening”, She is constantly assigned rather dangerous missions…

The Iga clan and The Kouga clan have been sworn enemies for more than four hundred years. Only the Hanzo Hattori truce has kept the two families from all-out war. Now, under the order of Shogun Ieyasu Tokugawa, the truce has finally been dissolved. Ten ninja from each clan must fight to the death in order to determine who will be the next Tokugawa Shogun. The surviving clan will rule for the next thousands years. But not all the clan members are in agreement. Oboro of the Iga clan and Gennosuke of the Kouga clan have fallen deeply in love. Now these star-crossed lovers have been pitted against each other. Can their romance conquer a centuries-old rivalary ? Or is their love destined to end in death ?

During prohibition, the law held no power and the mafia ruled the town. The story takes place in lawless, A town thriving on black market sales of illicitly brewed liquor. Avilio returns to lawless after some time away, following the murder of his family in mafia dispute there. One day, Avilio receives a letter from a mysterious sender, prompting him to return to lawless for revenge. He then infiltrates the Vanetti family, the ones responsible for his family’s murder, and sets about befriending the Don’s son, Nero, to set his vengeance in motion. Killing brings more killing, and revenge spawns more revenge. How will the 91-Day story of these men guided by a tragic fate end ?

Yoshino Takigawa, is secretly dating his best friend Mahiro’s younger sister. But when she mysteriously dies, Mahiro disappears, vowing to find the one responsible and make them pay for murdering his beloved sister. Yoshino continues his life as usual and has not heard form Mahiro in a month – until he is confronted by a strange girl who holds him at gunpoint, and his best friend arrives in the nick of time to save him. Yoshino learns that Mahiro has enlisted the help of a witch named Hakaze Kusaribe to find Aika’s killer and of the existence of an entity known as the “Tree Of Exodus”. The witch’s brother selfishly desires to make use of its power, in spite of the impending peril to the world. It is now up to Yoshino and Mahiro to help her save the world, while inching ever closer to the truth.

On one hot summer day in 1983, A transfer student named Maebara Keiichi comes to a peaceful rural village in Hinamizawa. There, he befriends his classmates Rena, Mion, Rika and Satoko. Accepted as a fu ll-fledged member of the club, Keiichi and and the gang plays all sorts of activities ranging from card and board games to hide-and-seek. But just as Keiichi was beginning to be assimilated in simple rural life, He stumbles upon the dark history of Hinamizawa. As Keiichi dives deeper into the mystery, He finds that his new founds friends may not be all what they claim to be.

Brandon and Harry, two friends so close they could be called Brothers, receives and abrupt and violent reminder one fateful day of how appallingly merciless the world around them can be. Their whole lives before then were simple and easygoing, consisting largely of local brawls, seducing women and committing petty theft to make a living and pass the time. What they failed to realize is that in this cruel world, change is inevitable. Millennion, the most infamous mafia syndicate in the area, which accepts Brandon and Harry. Harry has ambitions to ascend the ranks and one day replace Big Daddy as the supreme leader of Millennion, while Brandon only wishes to support his friend and appease Big Daddy who has taken custody of the women Brandon loves.

Over a century ago, Mankind was devoured by giant begins of unknown intelligence and origin known as Titans – Creatures that eat humans alive indiscriminately and for no apparent reason. The remaining population has managed to survive the last hundred years only by building a multi-walled city capable of keeping the Titans at bay, training military recruits to patrol the perimeter and gather intelligence about their mysterious foe. Eren and Mikasa have lived a relatively peaceful live behind the city’s wall, But when a massive Titan appears. smashing the outer barrier and unleashing a wave of terror, their lives are brutally changed forever…

In the year 2010, The Holy Empire Of Britannia is establishing itself as a dominant military nation, starting with the conquest of japan. Renamed to Area 11 after its swift defeat, Japan has seen significant resistance against these tyrants in an attempt to regain independence. Lelouch Lamperouge, exiled prince of Britannia, unfortunately finds himself caught in a crossfire between the two nation’s armed forces. He is able to escape, however, Thanks to the timely appearance of a mysterious girl named C.C., who bestows upon him Geass, the “Power Of Kings”.

Dr. Kenzou Tenma is a renowned brain surgeon highly lauded by his peers as one of the great young minds that will reform the field. But all of that is about to change with a grave dilemma that Kenzou faces one night whether to save the life of a small boy or that of the town’s mayor. Despite being pressured by his superiors to perform surgery on the mayor, his morals force him to perform the surgery on the critical patient, saving his life and forfeiting the mayor’s. A doctor is taught to believe that all life is equal; However, when a series of murders occur in the surgeon’s vicinity, All of the evidence pointing to the boy he saved, Kenzou’s beliefs are shaken. Along his journey to unravel the true identity of his little patient, Kenzou discovers that the fate of the world may be intertwined with the mysterious child.

That is it from today’s post on Top 10 Revenge Anime Series. If you do not agree with the points in the post and have some of your own opinions, share them with us in the comments section down below. Keep visiting Animesoulking for more information about Anime and Manga.

Chandan is the writer of “Top 10 Revenge Anime Series”. Also, Connect with me on youtube and Facebook.