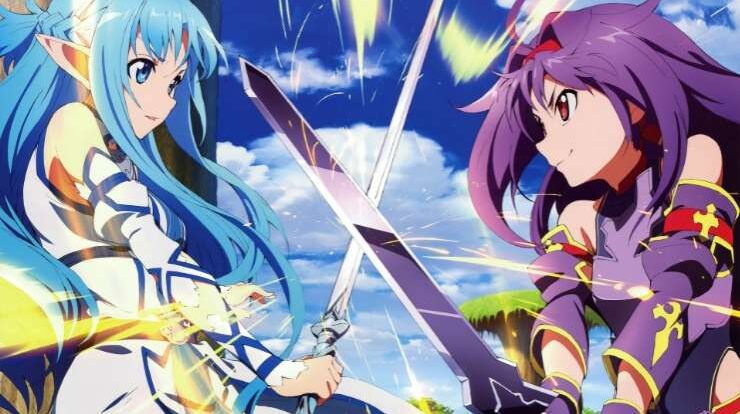 Top 10 Sword Art Online Fights – Hey guys!. In this post, I’ll be discussing a list of Top 10 Sword Art Online Fights. Nearly a decade since it took the anime world by storm sword art online looks to wrap its latest installment Alicization. War of underworld will close the longest arc in the series with an all-out war featuring the decisive clash between allies and enemies past and present. Sword Art Online spin through its share of ups and downs but it does go without saying it’s also filled with epic battles that earn the adoration of many of its fans.  So let us count down the list.

The Calibur Arc seems to be an overall inconsequential filler for some. However, I think it’s a nice comfy short story about Sao that I’ve always wanted to see an easygoing gaming arc featuring the gang taking on a quest with no death games or other sorts of drama to raise the stakes. The climax of the arc has a battle between the party and the king of the Giants Thrym. Now while the stakes aren’t super high in this fight I really like how the group worked together on this one. This is the first time you see everyone team up and they take the boss on in classic RPG star with people taking on the roles of DPS, casters, enhancers and such. I think what drags this fight down is that a scripted plot element resolves it I mean I would have loved to see the team strategize and finally break through the seemingly invincible boss.

One of the key battles in this part puts Eugeo against the legendary synthesis one. This fights notable as it’s an important test for Eugeo to see how far he’s come since his introduction at the start of the arc. With no Kirito by his side he’s left to fend for himself against arguably the most powerful among the integrity Knights. Of course Eugeo finds himself outmatched then again who wouldn’t when put against the the legend of rulid village with his overpowered future slashing. Unleashing his swords full control, Eugeo manages to trap himself with the strongest knight in life draining ice forcing a draw and a technical win for the invader.

For ordinal scale you have to open excitingly to set the pace for the movie and get the audience going. Luckily it’s opening battle a boss fight against 10th floor boss Kagachi the Samurai Lord does just that. The battle begins Yuna appears to provide buffs to the players with her singing while the obviously villainous rival character looks on as the battle continues. The fights drawn out although it doesn’t seem like it with. Everything that’s happening it also does the job of introducing the villain duo of Eiji and Yuna as well as shrouding their motivations and roles in mystery. Overall it’s a nice fight that hype up Eiji as a strong player of ordinal scale and gives Klein and his buddy some shining moments setting the pace for the movie. As a bonus it features some Kirito lowlight that prove that even the black swordsman is what everyone thought he was a bumbling geek in real life.

Before battle royale videogames were the in thing Sao gave us a dose of them with the bullet of bullets tournament in its third arc. Kirito is investigation of Death Gun finds him joining the tournament and allying with Sinon. With the tournament closing Kirito goes toe to toe with Death Gun while Sinon keeps herself busy with the previous tournaments runner up. Revealing himself to be from Aincrad Death Gun against the psychological advantage and uses his sword skills to push the tempo against Kirito. Now this is one of the few times we see Kirito outmatched by a player’s skill and reflexes as the former black swordsman is reeling after death guns attacks. Thankfully for Kirito helps on the way after her duel with Yamikaze Sinon intervenes providing ample distraction to give Kirito breathing room. Using Sinon’s phantom bullet as cover Kirito rushes in using his pistol as a stand-in for his second sword and breaks through the Darth Vader look-alikes attempts before slicing him in half.

Compared to past villains especially those from the first few arcs Eiji is well developed and if ordinal scale were to be made into a full arc he’d fit in as a good rival for Kirito. His much awaited duel against Kirito in ordinal scales climax is one of the moments I was looking forward to when I first watched it. It lives up to the hype with the two combatants waltzing around the parking lot while unis concert begins somewhere else in the arena. Now despite the overall nice fight choreography and the best unis on playing in the background to enhance the moment the fight doesn’t make it any higher than 6 because of its conclusion. After Kirito discovers Eiji secret and tears off that add on to his suit he defeats his rival with one strike.

In ALO Asuna assigned herself as a caster character who supposedly focuses on healing. Now old habits die hard so she occasionally rushes into close combat earning her the berserk healer nickname. Nonetheless her characters still designed to be a mage so a one-on-one fight with the mighty second it should be a blowout in favor of the latter right. Well it certainly looks that way early on Asuna strikes are parried and avoided and she easily finds herself on the defensive. After a brief break as soon as memories of Aincrad helped old instincts return midway through the fight and seemingly empowered by a remixed version of her theme that we haven’t heard in a while she rushes Yuuki with a furious sequence of attacks mounting a comeback to turn the tide and force out her ultimate sword skill Mother’s Rosario. Yuuki holds back instead of finishing the fight having found a suitable teammate for the sleeping Knights. In the end Asuna should feel no shame there’s definitely no shame in losing to the player who be even beat Kirito.

4. Group Fight In The World Tree

ALfheim Online did bring us one of the best fights in Sao in my opinion. I’m talking about kirito’s second try at getting past the World Tree Guardians. After settling his issues with Suguha, Kirito has another crack at the World Tree this time with Leafa and Recon by his side. It’s great to see even the goofy Recon given a shining moment. His sacrifice ends up being in vain though as the Guardians that keep spawning endlessly once more overwhelm Kirito and gang. Enter the Sylph and Cait Sith armies turns out Kirito helping them a few episodes ago allow them to arm their best players for the conquest of the world tree. Energized by the arrival of the cavalry Kirito and Leafa take it to the Guardians giving us the epic scene of Kirito getting leafa sword and somewhat dual wielding while rushing his way through the defenses.

Who doesn’t love a good old drawn-out battle against the ruler of the world. All things considered the rule is trio’s battle against administrator has a big boss field that allows it to work well as the climax of Alicization first half. The fight has many twists and turns last for a good two to three episodes in total and ends with a Pyrrhic victory for our hero. Highlights include the team getting saved from the seemingly invincible sword golem by Cardinals intervention only to have the latter fought against administrator. With her dying strength Cardinal allows Eugeo to transform himself into a sword that defeats the golem at the cost of his own body. With Eugeo dying and Alice unconscious, It went down to a one-on-one between Kirito and administrator. I’m certain that I’m not the only one excited to see Kirito back in the black cloak once more carrying on the will of his friends through his second sword Kirito wins a tough battle but at what cost.

2. Group Battle vs The Gleam Eyes

In my opinion this fight belongs in this slot not because of the choreography but because of how iconic it is. Ask anyone about a memorable fight in the SAO series and chances are you’ll get directed to this fight. After all this is the fight where Kirito signature dual-wielding was revealed. Entering the boss room to help a group of players who accidentally triggered the boss fight. Kirito, Asuna and Klein find themselves struggling to contain the Blue Demon. There with no choice, Kirito pulls out his trump card asking his friends to buy him some time. Kirito then opens his menu in order to access a unique skill it’s then that he unleashed his ability to dual wield his swords and reveal his then ultimate skill starburst stream. Kirito succeeds in the job finishing off The Gleam Eyes with just a sliver of life left.

1. Battle Against An Incarnation Of The Radius

At the top of our list is an over-the-top fight featuring everyone fighting against the true final boss of Aincrad. Fittingly named an Incarnation Of The Radius or Aincrad, the boss lives up to its billing as the ultimate final boss. Showing tremendous strength, all sorts of attacks and a powerful healing ability. It’s seems that this boss is really designed to be unbeatable. Kirito and the gang’s initial attempts to fight proved futile are sooner arrives and the awesome moment start rolling on. In short we have Yui coming in with reinforcements in the form of every friend and rival the gang have made in all the games they’ve played. Then Yui gives everyone their all gear back triggering cheers from fans worldwide who are glad to see the black coat and dual swords back. Along and action filled fight scene follows highlighted by a combination of Mothers Rosario and Starburst Stream that finishes the boss off for good. Oh what an epic way to end a movie, having the main group work together to indirectly beat the initial sword art online game and close that chapter of their lives is a treat to fans and it is in my opinion the best way to close out what’s already being a great movie.

That is it from today’s post on Top 10 Sword Art Online Fights. If you do not agree with the points in the post and have some of your own opinions, share them with us in the comments section down below. Keep visiting Animesoulking for more information about Anime and Manga.

Chandan is the writer of “Top 10 Sword Art Online Fights”. Also, Connect with me on youtube and Facebook.