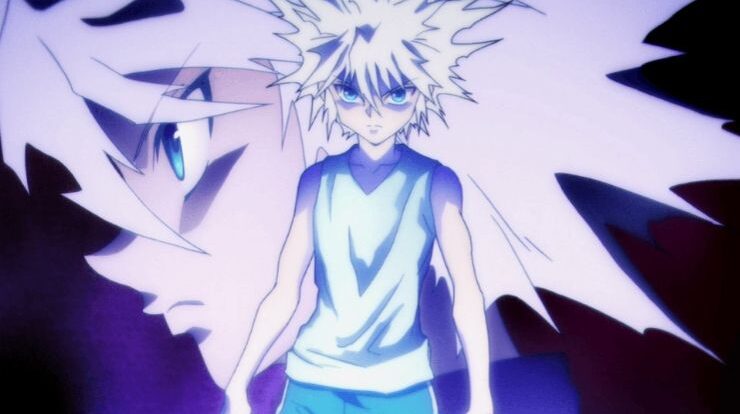 Top 10 Hunter x Hunter Anime Moments – Hey guys!. In this post, I’ll be discussing a list of Top 10 Hunter x Hunter Anime Moments. Hunter x Hunter 2011 reboot of the 1999 original based on Yoshihiro Togashi manga is a hundred and forty eight episodes long. As we’ve seen with long-running series they suffer from an inevitable drop in quality over time plot lines tend to get an imaginative characters get tired and stop evolving and even the animation suffers too it’s a disease that gets to the best of them. Thankfully, Hunter x Hunter doesn’t go through that .The retelling of the story of Gon Freecss a young boy whose dream of being a professional hunter takes him on a path of adventure and danger starts pretty slow as the naive and infectious the enthusiastic Gon makes new friends and enemies along the way the show gets better and better with each episode in each arc. Additionally light-hearted it gets progressively darker until the line between the good and bad guys are so blurred you just don’t know what to think. So let us count down the list.

This is one of those moments where the darkness of Hunter x Hunter smacks you in the face without warning. It Comes as early as episode 11 in the Hunter exam arc. Gon, Killua, Kurapika and Leorio four friends and Hunters to be must defeat a team of notorious prisoners to make it through to the next round. Killua Zoldyck matched against Johness The Dissector a mass murderer known for dismembering his victims with his bare hands. It seems to be an unequal match but not how we think in a flash Killua plucks Johness heart out of his chest with his bare hands leaving his teammates terrified. Except for Gon who explains to them calmly the Killua is from a family of elite assassins. It’s hard to believe the easygoing kid we first saw riding a skateboard is a cold-blooded murderer for hire whose kill switch may come on at any time.

Leorio who looks much older than his teen years is a big brother figure to Gon and the rest of his friends. He takes this role very seriously this becomes clear in episode 140 when he lectures Ging for being an absent father for Gon. Ging abandoned Gon as a baby to purs ue a career as a Hunter and while Gon bears him no ill will and even aspires to be like him. His friends aren’t too thrilled with Ging’s parental neglect. Leorio is enraged when Ging refuses to commit to visiting Gon who’s barely held on to his life and sanity after a particularly bruising battle and is in hospital. He channels his anger into one immensely satisfying nen empowered punch Ging smug face.

Lightning speed in godlike reflexes meet in this next moment when killua shows why he may be the coolest customer in the Hunter universe. Against the beast like Youpi, one of three royal guards in the service of the Chimera ant King Meruem, killua goes into God’s speed mode and ability that as its name suggests allows him to move and react above and beyond the limits of his body for a short period of time. He hits Youpi with a barrage of nen powered electric attacks to which the much stronger and bigger Chimera ant has absolutely no answer. It also serves as a reminder of killua’s dark past because this ability and power of born of the family imparted torture training and electric shocks that formed the young assassins childhood.

Of the many friends and villains Gon meets on his journey none perhaps has the impact that kite does on the young Hunter. A chance to find his father leads Gon to kite, Ging’s former student instead. The two form a strong bond despite not spending much time together. In the Chimera ant arc Kite, Gon and killua find themselves up against Pitou another one of Meruem’s Royal Guards. Heavily disadvantaged against the Chimera ant, kite sacrifices himself to save the two boys. The sight of Pitou nestling kites lifeless head in her lap is one of the most disturbing moments in Hunter x Hunter again coming with absolutely no warning. More profoundly, kite’s death is the catalyst for a sudden change in Gon’s character at a later stage one of the most iconic moments in anime history. Suffice to say kites death is a moment of awakening for Gon in more ways than one.

If killua’s Godspeed is or inspiring but not altogether surprising Kurapika’s Emperor time is just as amazing and quite unexpected. The lone survivor of the Kurta clan bears a deep grudge against the Phantom Troupe a gang of thieves who massacred his people for their scarlet eyes. This thirst for revenge shapes much of Kurapika’s character and his nen ability which takes the form of five chains on his right hand that have been specially conjured to bring down the spiders as the troupe members are called. In the battle against Uvogin, Kurapika reveals a frightening power that elevates the thinking Hunter to a terrific combatant which many of us may not have expected. Emperor time takes over when Kurapika’s eyes turned scarlet transforming the natural conjurer into a specialist with a hundred percent control over all six nen categories. It’s a power that doesn’t quite fit the young man with a gentle voice while on the one hand Kurapika uses Emperor time greatly risk his own life.

Kicking off the top five we have the moment Gon and the Hunters infiltrate the palace in the kingdom of East Gorteau for their final assault on Meruem. Entering a portal previously placed by expert infiltrator and member of the Hunter Association Knov, Gon and gang immediately run into Youpi sitting on the staircase leading to the King’s Chamber. To get to Meruem, they must get past this powerful enemy first. Meanwhile a second simultaneous castle invasion is under way this time from the sky. Hunter Association chairman Isaac Netero and killua’s grandfather Zeno Zoldyck crash land on Pitou and Pouf the third royal guard in a meteor shower of dragon aura. As the animation switches to slow motion to capture the emotion on each face during the twin break-in the stage is set for the show’s most memorable fights and unexpected outcomes some of which will come up later on in this list. At this point we can only wait to see how Meruem his powers not yet revealed will meet the Hunter’s challenge.

As part of his plan to raid the Mafia communities auction Phantom Troupe leader Chrollo Lucilfer kidnaps the Nostrade a family’s daughter and gets her to write him a fortune with her nen abilities.  The fortune hits home as it speaks of Uvogin’s death. In memory of his dead partner who loved a good fight Chrollo orders the rest of the spiders to head for the auction venue and go wild even as he engages the mafia hitmen sent after him. It’s a brilliant spectacle of mayhem, action and emotion all set to the haunting music of Mozart lacrimosa and the fortune tellers words. This moment cements Chrollo position as one of the series most charismatic villains. It gives the troupe a depth view antagonist groups in Shounen anime get. The spiders come across as a close-knit family and not a group of unfeeling thieves. They might as a rule welcome anyone who kills a member into their fold and it might not be averse to slaughtering a roomful of people but they’re more than their villainy and this Requiem beautifully captures this complexity.

At the beginning it’s hard to think of Meruem as anything but murderous mutant whose first action is to kill his mother. But a single chance encounter with the blind and clumsy Komugi turns his character completely on its head. What starts off as a game to kill time takes Meruem on a life-altering journey that confounds him as much as  it does us. It’s fascinating to see this cruel and violent King grow her heart and to be brought to his knees not by a skilled hunter but a defenseless human girl. At the risk of giving away the story Meruem close to death and almost blind after an epic final battle seeks out Komugi who’s also fatally wounded. The chapter on their unlikely friendship closes with a final game of gungi that’s sure to bring tears to the most hardened hearts making an antagonist like Meruem capable of such raw emotion and making it believable is perhaps one of Hunter Hunter’s biggest achievements.

The battle between Netero and the ant King is a masterclass of action and analysis, experience and natural talent with a good bit of mutual admiration thrown in. After losing an arm and a leg Netero on the verge of death but it just so happens that the wily old hunter holds the winning card against his seemingly invincible opponent. Netero unleashes a final attack a suicide bomb that triggers only when his heart stops. Before this ultimate sacrifice he shows his enemy one last act of kindness fulfilling his wish of knowing the name left to him by his dying mother. A victorious but defeated Meruem where admits the old hunter had him a checkmate all along and that arrow gets a send-off that few mentors in Shounen anime managed to achieve.

If you haven’t already noticed the hero of this series Gon is barely featured on this list but that all changes right now. The most memorable moment in Hunter hunter belongs to the boy whose story this is after all. It also ties up with another moment earlier on the list kites death. In the inevitable fight to the death between Gon and Pitou that we knew was coming Gon’s forced to face the truth of kites death. But instead of acceptance and sorrow he’s overcome by grief and hate and snaps setting off undoubtedly the most terrifying transformation in anime history. Sacrificing his life energy and all of his nen abilities Gon turns into an older stronger and altogether unrecognizable version of himself. Besides have being completely switched what ensues is a brutal one-sided takedown where the lines between good and bad blur to such an extent it’s hard to see actually who’s right and who’s wrong. We no longer recognize the monster with dead eyes beating an already lifeless Pitou to a pulp is this really the kind hearted gone we all know and love will he ever be back. Hunter x Hunter hits a pinnacle of darkness in this devastating moment that we may never recover from.

That is it from today’s post on Top 10 Hunter x Hunter Anime Moments. If you do not agree with the points in the post  and have some of your own opinions, share them with us in the comments section down below. Keep visiting Animesoulking for more information about Anime and Manga.

Chandan is the writer of “Top 10 Hunter x Hunter Anime Moments”. Also, Connect with me on youtube and Facebook.