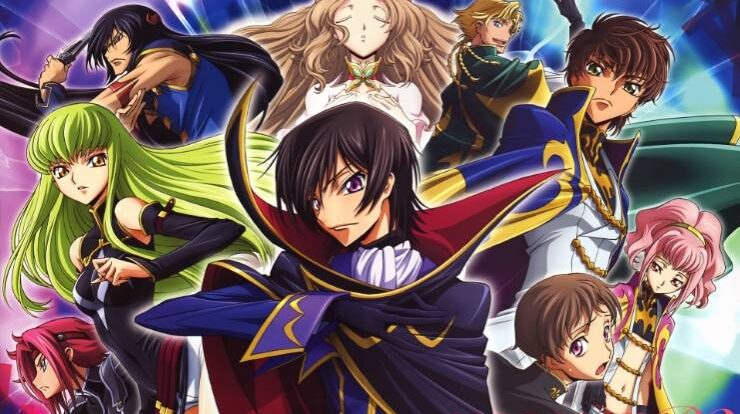 Do you have it? Guts. I mean, Berserk sure does in the form of its legendary swordsman slash protagonist. The ultra-violent series moves slower, but it’s so well done that you probably won’t notice or care. The medieval epic about a soldier named Guts slowly becoming a leader of a mercenary group is bloody, intense and highly addictive. In other words, it’s perfect for Game of Thrones fans.

The series takes place on the planet Gunsmoke, a dangerous place full of deadly outlaws, superhuman assassins and a donut munching pacifist gunslinger named Vash the Stampede with retrograde amnesia. While he tries to uncover the mystery of his past, he’s hunted by merciless mercenaries with hilarious names. Case in point, one dude is named Midvalley The Hornfreak and uses a saxophone to control sound waves to inflict pain and his victims.

Everyone loves Disney movies, right? Well, Studio Ghibli’s is basically the Disney of Japan. So, it’s the perfect entryway to anime for new fans. Well many folks would say Spirited Away is their go-to Ghibli film, I think the environmental fairy tale of Princess Mononoke is a better choice overall. It’s violent without being gratuitous, wondrous without being childish and packed to the brim with incredible mystical creatures. Hayao Miyazaki’s story of a cursive prince and a girl literally raised by wolves trying to protect forest spirits from human destruction is practically perfect. Plus, it has the kodamas, which are ,without a doubt, my favorite Ghibli characters of all times.

In a world dominated by superhero movies, One Punch Man is the hero we deserve and the one we need right now. Saitama is a plain-looking guy who just so happens to be so incredibly strong and can defeat any enemy in a single punch. You know, being that strong sounds great, but it turns out, it can actually be pretty boring. I mean, what’s the point if you can just beat everyone in a single punch? It’s a show that pokes fun not only at superheroes, but an anime itself.

What would you do if you had the ability where one time you could issue a command to anyone you saw and they would have to obey it? Well, that’s exactly what happens in Code Geass. When Lelouch, a young exiled Prince living in Occupied Japan, gains that exact ability. He uses this power called the Geass to lead a rebellion against occupying Imperial forces and the results are explosive. The show has giant mechs and political intrigue.

As any economics teacher will tell you, nothing in life is free. But perhaps, the best illustration of this concept is Fullmetal Alchemist, the story of two brothers, Edward and Alphonse who dabbled in the ancient art of alchemy, which wound up costing Edward an arm and a leg, quite literally. Alphonse, on the other hand wasn’t so lucky. He lost his entire body and now some sort of weird spirit inhabiting a body of enchanted armor. The show is perfect for anyone who loved the epic scope of a show like Avatar: The Last Airbender, but wanted more violence, and more personifications of the seven deadly sins.

Everyone loves Rocky, right? I mean, the story of an unlikely hero busting to become a badass boxer. That’s cool, right? Well, Hajime no Ippo’s is gonna scratch that same itch, but with 100% less Sylvester Stallone. It tells the story of a shy high schooler, who goes from getting beaten up by bullies to competing to become a world champion Boxer. With ferocious fight scenes, a plucky and charismatic hero and more heart than most Pixar films, Hajime no Ippo put a smile on your face faster.

If fantastic beasts and where to find them didn’t fill the harry potter shape hole in your heart then Little Witch Academia is for you. It’s a simple, sweet and spirited story of a young girl attending an academy for witches who winds up in a deadly showdown with a dungeon twirling dragon. While there’s a TV series in 2017, the original short is only 26 minutes long.

Do you know someone who loves things like Firefly or guardians of the galaxy? You know, things that tell really good stories about not-so-good people in space? Then Cowboy Bebop is the show for them. At its core this is the story of a group of bounty hunters gallivanting around the galaxy on their ship, the bebop. But with killer characters, including a hyper-intelligent Corky, bone-crunching battles and a soundtrack full of jazzy earworms, Cowboy Bebop is much more than just another space adventure.

Absolute power corrupts absolutely and it gets even worse if you’re a sociopathic high schooler with a god complex and a supernatural notebook that can kill anyone if you write their name inside of it. But that is the basic premise of Death Note and it delivers a thrilling game of cat-and-mouse that will have you fiendishly binging episode after episode.

That is it from today’s post on Top 10 Best Anime For Beginners. If you do not agree with the points in the post and have some of your own opinions, share them with us in the comments section down below. Keep visiting Animesoulking for more information about Anime and Manga.

Chandan is the writer of “Top 10 Best Anime For Beginners”. Also, Connect with me on youtube and Facebook.

Hey there! I'm Chandan and I'm from India. I'm a writer and youtuber. I love to watch anime and reading manga. You can contact me at: Animesoul[email protected]