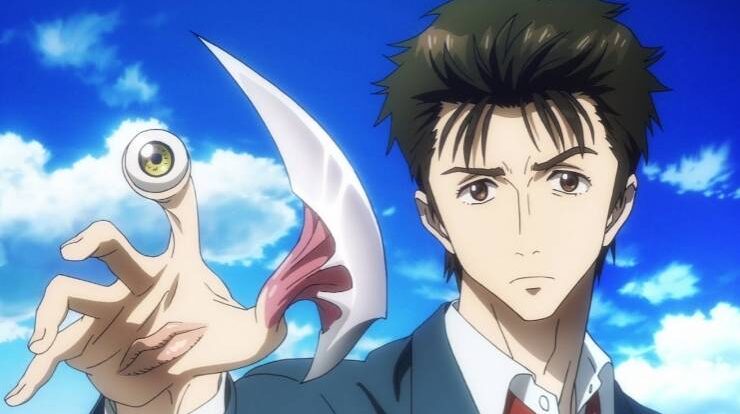 An adaptation of a manga based on a horror novel, Shiki takes place in a village that falls victim to a serious epidemic. A natural death begin to occur and a doctor Ozaki and troubled youth Yuuki team up to solve the mystery plaguing the village. The way the show structured reminds me of classic horror shows. Instead of focusing on cool powers or action-packed survival plots reminiscent of arcade rail shooter games, Shiki takes things slowly and methodically, focusing more on ethical and moral dilemmas for the audience to digest. Being scary is subjective but Shiki certainly filled with unsettling images, especially, with the character designs, those are creepy eyes that you don’t stare into, for then haunt you throughout the night.

Memories is quite complicated. Instead of an anime series, it’s an anthology of short films: Magnetic Rose, Stink Bomb and Cannon Fodder. Individually, the three films boasts impressive animation for its time as well as a taste for atmosphere. Magnetic Rose is the best among the three of them, it shouldn’t be surprising since the legendary Satoshi Kon wrote the script. The reason why the movie’s here is because Nightmare fuel just scattered all across the movies, from the Haunted spaceship to the visuals of terrorist attacks, memories certainly fits the horror genre. The art star adds a lot more to this horrifying atmosphere and while memories is probably not scary in the traditional sense, everything seems a lot harsher in hindsight.

Hidden deep in the human psyche are a person’s deepest desires and secrets. Scientists have created a device that allows a person to access dreams andrecord them, it sounds cool doesn’t it? Unfortunately, the device named “DC Mini” also opens the floodgates to possible forms of psychological attacks on people. Naturally, of course things go wrong and one of the prototypes of the machine goes missing, the catch here is that the prototype doesn’t have the protection system which protects people’s minds from being hacked. Thus, it falls to Dr. Chiba and paprika’shands to protect the world from a whole new form of terrorism. Even in reality, the world of dreams is in the world that I would gladly venture into. Now imagine it being visualized in anime form and it’s a no brainer that paprika is included on this list. The visuals of dolls in the movie would surely haunt the dreams of the unprepared.

Perfect Blue is a movie about Mima Kirigoe, a member of an idol group, who pursues a solo career. The decision to go into acting is tough enough already but add in compromising photo shoots, a stalker and a series of murders to the mix and then you have yourself a benchmark psychological thriller. The line between fantasy and reality gets blurred and you start seeing the signature Satoshi Kon mind, that’s made him a renowned personality in the industry. The movie features lots of blood, violence and other scenes that you wouldn’t want to watch with kids. This is filled with gruesome scenes and it isn’t a movie for the faint-hearted but if you’re one of the people looking through this list in order to find anime that would satisfy your thirst for horror then you’ve hit the jackpot with this.

Not to be confused with the popular movie that shares its name Mononoke the TV series is a spin-off of a horror anthology. It follows the medicine seller who travels to Japan in search of evil spirits called Mononoke. However, he can’t just slay the spirit despite being a master of the occult, before he can slay one he has to first discover the spirits form, origin and motive. First thing you might notice about the series is its art style, is certainly not the typical style that you’d expect from anime and this series utilizes it excellently. The anime is filled with vibrant colors and an overall ambiance that resembles something that you’d expect from ancient japanese artwork. It also allows the animation team to showcase their talent in depicting supernatural creatures andall sorts of horrors. Overall, Mononoke isan interesting watch that might not be everyone’s cup of tea but trust me whenI say that it is definitely worth a shot.

5. From the New World

From the New World is a story of a futuristic utopia except it doesn’t even look sci-fi at all. Apparently, modern society as we know it hasn’t been replaced by steampunk buildings and high-tech gadgets, you heard that right! Our protagonist, Saki Watanabe lives in an isolated village in a world ruled by psychic powers. After obtaining her powers, the next step is to enter an academy with the aim of owning her skills, however, the question soon surfaces what about the children who don’t awaken their powers? Also, what about the cap that abduct children? Looks like the world is a lot darker than we thought it would be at first glance. This show got me at first, I thought it was just a run-of-the-mill seasonal show around half a decade ago and that it wouldn’t be full of scary moments but here we are with the show that’s unafraid to kill off key characters, show off some unsettling imagery, reveal scary monsters and attack us with nightmare inducing sequences. Plot twist after plot twist, brilliant imagery and morally thought inducing plot lines made from the new world a must watch among the 2012 shows.

If you’ve been watching anime for sometime, you know better by now than to get fooled by first impressions. When They Cry starts off as what you’d expect from one of those harem visual novels. Keiichi Maebara moves to a province where he meets several girls and starts befriending them. All’s well and everyone’s happy in this rural setting but of course something soon goes wrong. Every 4 years, a murder happens in the village as the mystery starts to unfold it turns out that the key suspects are not closer to our protagonist than you’d expect. It’s a murder mystery series and it’s not afraid to get down and dirty when it comes to depictions of such heinous acts. I dare say that, When They Cry would give stuff like Evangelion, a run for its money, as far as insane mind racking scenes and overall creepiness goes.

We can’t have a top three list without the king of body horror. One night spores fall to earth, carrying with them alien organisms called parasites. Infecting humans get taken over, gaining the ability to transform their bodies with an appetite for fellow humans, however, one parasite was unsuccessful in taking over its intended host high school student Shinichi Izumi. Stuck on his right arm, Migi forced to form an uneasy alliance with its hosts as the duo fight to survive a world where danger lurks in every corner. It’s got action field fights, exciting chase scenes and a varied arsenal of body horror. Shinichi and Migi combination fights feature a lot of creative uses of the parasite arm. If you’re in for body horror and thrilling fights, this is an anime you shouldn’t miss.

Now at first glance life a grace field house may see more sunshine and butterflies. It’s an orphanage where children live happily with their mom Isabella, what could possibly go wrong? Everything, something really messed up is going on in this orphanage. Finding the truth about the orphanage, a trio of kids – Emma, Norman and Ray work together to get orphans to escape the grisly fate that awaits them. The premise seems dark enough but I’d personally classify this series as a thriller than a horror show, nevertheless, it has a lot of gripping scenes that keep you on guard. When I watched it, I was amazed by its masterful use of visuals and sound to create an ominous atmosphere. You almost expect something to pop out only for it then to be nothing and then all of a sudden a camera ship will happen which would quickly catch you off guard with a jump scare. This anime is sure to leave you at the edge of your seats.

Dr. Kenzou Tenma, a surgeon who decides against protocol to operate on a dying boy Johan Liebert. Now, the two reunite years later but not as doctor and patient as doctor and murderer. With a guilt of helping create this monster, Tenma goes after the boy he once saved. Now to be honest, Monster isn’t as scary as the other titles on the list as far as the traditional definition of horror goes, I mean, no jump scares, demons dismembering human corpses or violent deaths or exploding heads or anything like that. However, it attacks way deeper than visual horror, it strikes fear in our hearts by simply illustrating how horrible the human being can be. Like the show’s protagonist, we’ve perhaps had that lingering feeling of being responsible for some of the most degenerate Horrors imaginable to man. Have we somewhere along the line helped create an uncontainable evil that lurks a lot closer to home than we imagined, it’s a question that begs pondering from some of us.

That is it from today’s post on Top 10 Best Horror Anime You Must Watch. If you do not agree with the points in the post and have some of your own opinions, share them with us in the comments section down below. Keep visiting Animesoulking for more information about Anime and Manga.

Chandan is the writer of “Top 10 Best Horror Anime You Must Watch”. Also, Connect with me on youtube and Facebook.