Home Naruto/Boruto How Strong is Gaara in Boruto? 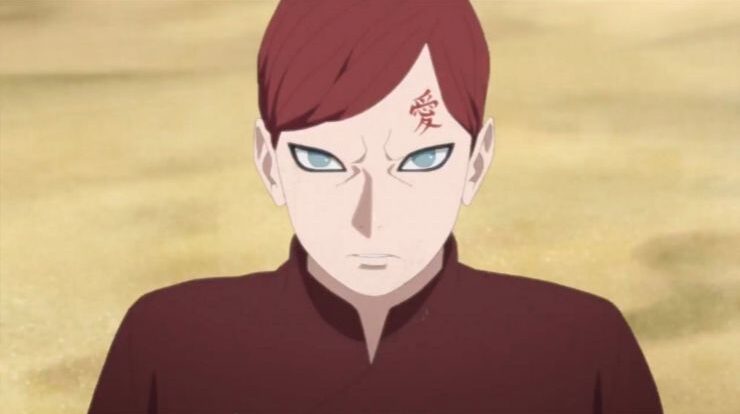 Gaara is able to use Earth, Lightning and Wind Release Nature Transformations. He is able to mix wind release with his sand in order to increase its speed and coverage area. Gaara is able to manipulate sand and a high level; for offense he can shape Sand Shuriken or Sand Swords. He also uses it for flight, a method of sensing concealed targets; a Sand Clone to reinforce himself or allies; a Third Eye for tracking his target. He also uses sand to perform sealing as seen in the war. He inherited the Magnet Release Kekkei Genkai from his father except he hasn’t been shown using it.

Nothing to say here since Gaara doesn’t possess any particular skill in Genjutsu nor has he shown any level of immunity to them. Being a high level shinobi as it is with many others, he may be immune to low level genjutsu depending on the level of his chakra control.

In battle, Gaara tends to stay away from his opponents and rarely uses taijutsu instead using his sand to fight of his opponents. Still engaging him can be quite dangerous and in Boruto, Kinshiki regards Gaara’s taijutsu as being on par with that of the other Kage which means he must have trained in hand to hand combat after the war.

Because he always stands still in battle, Gaara’s speed can hardly be determined. We however have to consider his battle speed which is on par with most high level ninja. Capable of keeping up with people like Mu, Gengetsu etc. In Boruto, he was able to temporarily restrain Momoshiki with his sand, despite the latter coming towards him with incredible speed.

Gaara rarely uses his hand to do anything. His sand does most of the work for him. He carries a huge supply of sand whenever he goes in a gourd, which itself is made from sand. I don’t know if this somehow indicates his strength since he probably makes it lighter using his chakra.

Gaara is a very smart character. First of all the fact that he was chosen to be Kazekage at a young age wasn’t only about strength but his ability to lead and decision making. He’s also quite strategic in battle, finding ways to counter his opponents ability after only seen it once; against Mu, Gengetsu. His diplomatic judgement during the Kage Summit Arc was pretty impressive as well despite his experience.

Gaara’s defense is among the best in the series. If opponents are able to get close enough to attack him, his Shield of Sand automatically protects him from all threats, even those he is not aware of. If the Shield of Sand is penetrated, either through speed or brute-force, Gaara also has access to a secondary Armour of Sand covering his body. He has even stronger sand defenses capable of protecting him against very powerful attacks earning fame as an “Absolute Defense” and allowing him to go years without experiencing a single injury.

Gaara doesn’t have any form of Summoning Jutsu. It’s not like he actually needs it though. He already has his sand which he could get from anywhere which basically acts like a summon.

Gaara has always possessed large chakra reserves. His chakra levels are partly because he is the Jinchuriki of Shukaku, but even after Shukaku is removed from his body in part two, there is no noticable difference in his performance. In part one his reserves were such that he could battle against Naruto with both exhausting in the end. His reserves are enough for him to manipulate sand at a very large scale to create tsunamis and storms and if need be he could use his personal sand to break down minerals in the ground to create more sand which requires even more chakra.

Gaara’s Stamina was such that he took active part in the Fourth Great Ninja War from start to finish battling against all kinds of opponents; Mu, Gengetsu, Madara etc. He was one of the greatest performers in the war and his longevity wasn’t just due to his huge chakra reserves but stamina which complements chakra.

Gaara’s rating isn’t that high because of his lack in places like; Genjutsu, Taijutsu, Summoning but he’s quite high in all the others.

What Tier is Adult Kazekage Gaara?

Gaara is quite a powerful shinobi. In the war arc he was already capable of taking on High Kages like Mu and Gengetsu in a 1vs1 and with some help he could seal Gengetsu. By adulthood, he should solidly be in the “High Kage Tier” which includes the likes of; Mu, Jiraiya, Kisame, Itachi, Orochimaru and many others.

Gaara’s battle speed is enough for him to follow Momoshiki and temporarily restrain him. His defense can protect him against all kinds of attacks and he can always keep his distance against his opponent and use his sand. I will say Gaara can defeat many High Kage shinobi as he already held his own against many of them in the war. His ability is weak to water, oil explosions and lightning so someone like Kisame can defeat him. Deidara defeated him but he was also worrying about his village. Still Deidara’s explosions are a good counter and he can also make use of flight like Gaara.

That is it from today’s post on How Strong is Gaara in Boruto? If you do not agree with the points in the post and have some of your own opinions, share them with us in the comments section down below. Keep visiting Animesoulking for more information about Anime and Manga.

Chandan is the writer of “How Strong is Gaara in Boruto?”. Also, Connect with me on youtube and Facebook.