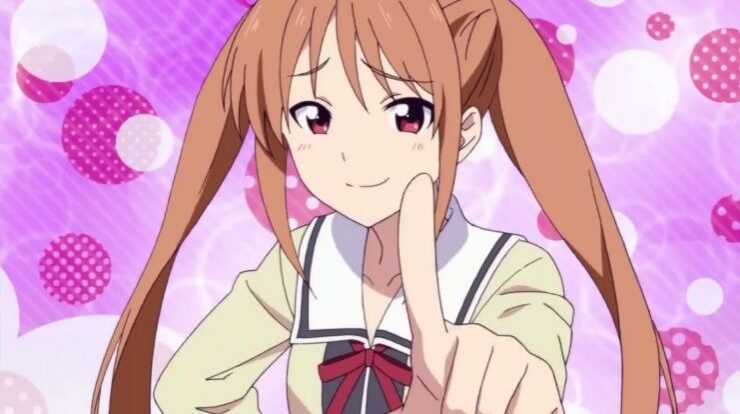 Top 10 Beautiful Anime Girls But Stupid – Hey guys!. In this post, I’ll be discussing a list of Top 10 Beautiful Anime Girls But Stupid. Each character must have certain characteristics that make them always be remembered and memorable by the audience. Of the beautiful girls in the anime, there must be some who have “baka” traits or being stupid and sometimes useless. The behavior and even her mind are like a child. Characters like this are usually depicted beautifully but have a dark side, which is their own stupidity. This time, let’s talk about some beautiful but stupid girl character in anime. Well, here is the list.

Yui is one of the main characters in the K-On anime and she is the main guitarist and vocalist of the band Ho-kago Tea Time. Yui’s stupidity has been seen from the beginning of this anime. When she misunderstood that “light music” is the same as “easy music”. Yui first joined a music club and became a guitarist without any prior experience or skills. But even so, Yui is a person who quickly learns things and quickly forgets them. With short brown hair and always wearing hair clips, Yui is actually a beautiful and kind character, despite she being stupid and lazy.

Seo is a friend of Chiyo Sakura who is one of the heroines in this anime. Seo is popular among her classmates and often asked for help in extracurricular activities. But if we look at her personality is always insensitive and always insolent which often makes people feel offended. Seo is depicted as a beautiful teenage girl with greenish wavy blonde hair which is tied. Even though she has a beautiful and helpful face, her ignorance and insensitivity to the feelings of other people makes her on this list.

8. Lala Satalin Deviluke From To Love-Ru

Lala is the main heroine character in the anime To Love Ru. She is a very beautiful and plump teenage girl, depicted with long pink hair and emerald green eyes. Moreover, she is very enthusiastic about even the smallest things, has a cheerful and a little childish nature. These kind of trait she has, perhaps because she is the first child that make her spoiled. It is also known that she can be a cool-headed and clumsy character, regardless of her attitude. Lala is someone who is known for her intelligence and even she has made a series of amazing discoveries.

She is one of the stupid demons and always considers herself as the ruler of the anime world. Since the beginning, this character was introduced as a devil who was stupid and thoughtful to cause damage, but in the end she always face failure and misfortune. Especially, when she is involved with Raphiel, who is one of the angelic characters in this anime. Satania looks very stupid and even feels sorry for being teased by Raphiel. Her personality was probably affected by the upbringing of her family which considered themselves nobles. Her high self-esteem also made her feels awkward and being a loner in the human world. Apart from everything, Satania can be said to be a cute and beautiful girl character, if her behavior can be fixed as possible.

Kagura is the main protagonist of the anime Gintama. She comes from the Yato tribe and the younger sister of Kamui. For those who don’t know, Yato is one of the strongest races in the universe in the world of Gintama, they have a strength that beyond normal humans. But the Yato clan, has a weakness which is getting exposed to sunlight. So that, Kaguran’s character is always depicted as a girl carrying an umbrella. Kagura is one of the most beautiful characters with red hair and navy eyes. Apart from her beauty and strength, she is a stupid character, yes this might be the demand of this comedy-themed anime in which she is guided as a silly character and likes to behave stupidly.

This anime tells about employees of a family restaurant. In the story, Yamada is a 16 year old girl and always announces that she is a mysterious person. At the beginning of her appearance, she admitted that she was an orphan because her parents were burned. Yamada was introduced as a girl who likes to cover up her family problems. She is also described as an incompetent and sometimes very annoying employee. Especially, Yamada’s fantasies about having a “perfect family”, made her look both stupid and pitiful. Working as a waiter in a restaurant makes it even more difficult for employees because Yamada always causes problems. Apart from all of that, Yamada is a person who needs love and actually needs attention.

Being depicted as a young girl who has long blonde hair and blue eyes makes Kyouko a kawaii character. She is also a kind and cheerful person, although sometimes she can be selfish. Her behavior often annoys people. Also, she often acts freely without thinking first. Kyouko is a student who is lazy and doesn’t like to study, but actually she is very talented in applied arts. Her personality is in contrast compared to when she was a child. When she was little, Kyouko was more quiet and shy.

She is one of the protagonist characters in this anime. Megumi Noda is a second year music student. In this anime, she is described as a pale skinned girl with short brown hair. Regardless of her appearance, Nodame is depicted as a dirty woman. Especially, when she cooks and cleans the leftovers, it is so dirty that there were mushrooms growing on her clothes and it could poison anyone who ate her food. In spite of her behavior, she is a very talented pianist.

Yoshiko is a girl who has white skin and long straight light-brown hair which is usually tied. For some reasons, Yoshiko is depicted with a character who really likes and addicted to bananas. Her stupid behavior has been seen at the beginning of the series, especially when dealing with Akuru Akutsu. Their daily lives are filled with stupidity and absurd ats. Yoshiko is also portrayed as a pretty perverted girl.

Nothing is more stupid and useless other than this goddess. Aqua is described as a very beautiful goddess in the beginning. She also has a slim body and quite big boobs. Also, she’s got a long hair tied up and wear a very short miniskirt. Her trademark is that she wears a transparent pink Hagoromo. Perhaps, the positive thing about this goddess is her honesty, because every time she lies, it will definitely be exposed as she has no concept and very bad at lying. Apart from that, she is a completely ignorant and useless character. What she does, can lead to a bigger negative impact than a positive thing.

That is it from today’s post on Top 10 Beautiful Anime Girls But Stupid. If you do not agree with the points in the post and have some of your own opinions, share them with us in the comments section down below. Keep visiting Animesoulking for more information about Anime and Manga.

Chandan is the writer of “Top 10 Beautiful Anime Girls But Stupid”. Also, Connect with me on youtube and Facebook.