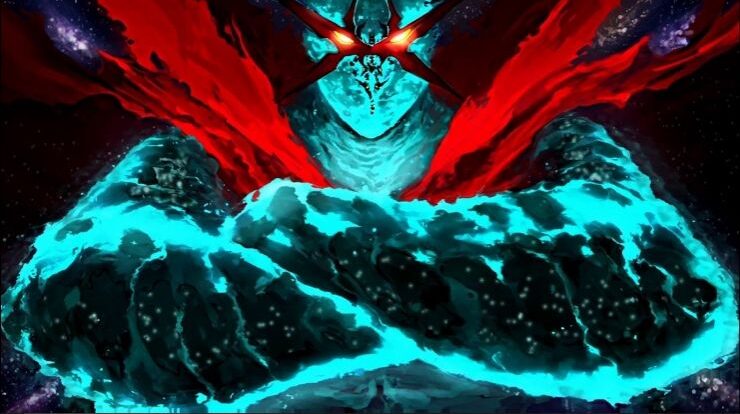 Arale is a female android made by Senbei Norimaki. Even though Arale’s android has a personality like normal humans in general with an energetic and sometimes naive personality, Arale has got super powers. She is considered as the perfect android in the world, despite being nearsighted, so she often wears glasses. In spite of being naive and silly at times, Arale is actually smart enough to do advanced math.

The design of Genesic is different from its predecessors, apart from having five GaoMachines, this Genesic is given a slimmer design than GaoFighGar. The Genesic Gaogaigar is also protected by armor, which seems to have similar properties to the J-Ark Generating Armor. This Mecha can also release Genesic Aura which can cause damage. Many equipment and weapons are installed in this robot, one of which is called Hell and Heaven, where 3 of Gao’s Gadget neck will be detached, reconfigure, and merge to form an electromagnetic tornado.

8. Gunbuster From Aim for the Top! Gunbuster

It is said that this mecha is very strong as it is formed from a combination of Buster Machine 1 and Buster Machine 2, each of which is run by a different person. Gunbuster appears in a humanoid mecha. This mecha can stand as high as 240 meters. Not only does it have extraordinary attacks, but this mecha is also equipped with Inertia Canceller and Buster Shiled to deflect attacks. With the screams of the girls, this mecha is also famous for the Super Inazumi Kick which can immediately destroys a bunch of enemies at once.

At the beginning of its creation, Devil Gundam is called Ultimate Gundam. It is a unique technology and organic network, created by Dr. Kasshu. The essence of making this gundam is to naturally nourish and improve his ability. Dr. Kasshu hopes that his abilities can be transferred to humans, which in turn can repair and develop the human body to be free from disease. However, due to an error, this Gundam has a malfunction, and tried to destroy the earth. One of the speciality of this mecha is the Self-Evolution function where this ability can evolve and improve itself by changing to a new, stronger form.

It belongs to the very strong gundam of its time, because this gundam is made of Luna Titanium Alloy and the frame is lighter than the Zeon mobile suit. This mecha is also capable of dodging the MS-06 Zaku II machine gun fire with little or no damage. The RX-78-2 is also the first battle suit that has a firepower, equivalent to a battleship’s beam cannon. Apart from using gunfire, this robot is also armed with two plasma beam swords that can cut through any metal easily.

This Mecha is the first non-prototype Evangelion unit. This is the only EVA born from Lilith. After going on a rampage and eating up Zeruel’s machines, this EVA was the only one who could go without the central cable until then the mass construction of the Evangelion. Regarded as a functional Eva unit and tested by Shinji Ikari, this Eva also has the best record during the battles of all Evangelions. This Eva is more independent since it doesn’t need instructions while in Berserk Mode.

The Getter Emperor is a giant machine, it is estimated that it resembles a planet and even bigger. Not only does it has extraordinary height, Getter Emperor also has extraordinary abilities which use Getter Rays, and its Getter Beam is also capable of destroying the entire Invaders fleet. Based on the story, all the energy that is expended even goes beyond the big bang.

Ideon is one of the masterpiece of Tomino Yoshiyuki, the gundam creator from Japan. At first, it is like a madness to create this mecha. Turns out, this mecha is so sophiticated that it is used to reverse things in interstellar warfare, also it seems to have no limits in terms of power. The appearance of this mecha is normal, nothing special, as well as its strength is visible. Not only equipped with its terrifying cannon that can cause a black hole, but this mecha is also armed with a long sword of light that can easily split a planet. Basically, Ideon is a destructive mecha and capable of destroying the universe.

Doraemon is not a mecha fighter type, he is just an ordinary cat mecha from the future. But if he want, with the tools he has, Doramon can rule the world easily, even without causing war. Various sophisticated tools from the future make it easier for Doraemon if he want to rule or destroy the world.

It is clear that the first number or let’s say the winner of this list is this mecha. Until now, there has been no mecha that can exceed or even match the capabilities of this mecha. It was the unification of several mechas that happened during the final battle between the team of Dai-Gurren against the anti spiral. Making it grow bigger and emulate the galaxy itself, this mecha was beyond our common sense. Until the end of the series, this mecha was literally the size of an entire galaxy and able to throw a galaxy like a Shuriken toy. Apart from being huge, this mecha is also armed with a very large drill.

That is it from today’s post on Top 10 Best Mechas in Anime History. If you do not agree with the points in the post and have some of your own opinions, share them with us in the comments section down below. Keep visiting Animesoulking for more information about Anime and Manga.

Chandan is the writer of “Top 10 Best Mechas in Anime History”. Also, Connect with me on youtube and Facebook.