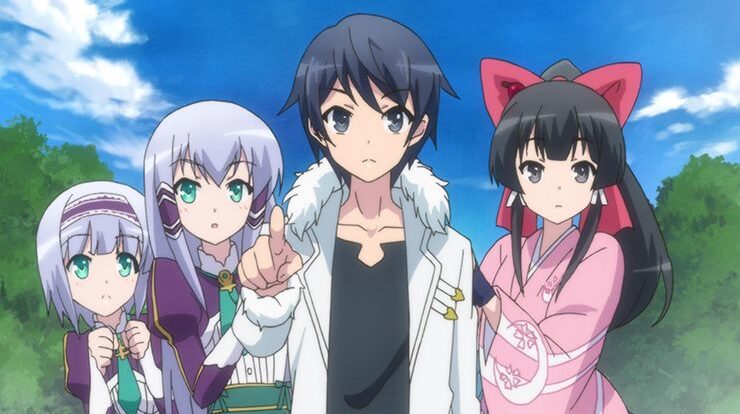 10. Blade Dance of the Elementalers

Kamito is a dude who enrolls at the Areishia Spirit Academy. However, Kamito can only study at the academy on the condition that he win the Blade Dance, a magic battle festival. The thing is, he is the only male student among all the other girls training to be shrine princess. I’m not quite sure how he’s going to succeed with so many pretty and sexy girls distracting him all the time.

Basically a dude called Junpei gets cursed with the ability to understand cat speech after breaking the head of a cat god statue. To break the curse, Junpei has to do a hundred good deeds for cats. If not, he will turn into a big fluffy cat forever. So, please be kind to all animals especially cats.

The tutor Fuutarou manages to help the Nakano sisters improve their academic performances. The girls are really naughty and they keep delaying any actual tutoring with all sorts of funny distractions To make matters worse, Fuutarou has the nerve to fall in love with one of the girls. If you like anime with lots of squabbling and relationship drama, this one is for you.

To keep the peace between Yakuza gangs, Raku has to pretend that he is in a romantic relationship with Chitoge, the beautiful daughter of the leader for the American Bee Hive gang. However, Raku and Chitoge hate each other to the moon and back. With many beautiful girls popping up all around him, Raku is determined to find the girl of his heart. It’s a solid harem anime so yeah, give it a watch.

6. In Another World With My Smartphone

God doesn’t usually make mistakes. But in the world of anime, anything is possible! The Almighty God accidentally kills Toya with a bolt of lightning. As an apology, Toya is sent to a magical fantasy world. The fun part about it is that Toya is allowed to bring his smartphone with him. Toya can use GPS, surf on the internet, and get lots of pretty waifus.

Set in a world of magical dangers, special warriors known as Inquisitors are trained in the Anti-Magic Academy to stop these threats. Ouka joins the 35th Test Platoon, one of the squads in the academy. Although they argue a lot, they must set their differences aside and work together as a team. If you like lots of action, cute girls, and weird eyeball monsters, this anime might be just for you.

This anime is about an otaku named Kirino who has to face relationship problems after coming back to Japan. While the first season focused on how Kirino got into otaku culture, this second season goes deeper into her relationship with her older brother Kyousuke and their friends. The animation is pretty well done and there are lots of funny parts. Give this anime a watch, will ya?

This fantasy anime is about the main characters, Saito and Louise fighting an evil king in the Holy City of Romalia. There are lots of great fights involving void magic and fluffy romantic moments. I think this storyline is pretty standard so watch this anime for the Ecchi scenes that are jam-packed with plenty of boobies.

2. Blessing of the Campanella

The story is pretty straightforward. The main character, Leicester parties with his homies. A meteor shower passes by and one of them crashes into Earth. Leicester finds a sleeping girl who wakes up and calls him daddy. They go on adventures together and meet even more lolis. I wish that I had someone to call me daddy … #foreveralone

This anime is about Mahiro, an ordinary high school student who was attacked by a dangerous monster. He is rescued by a girl named Nyaruko, an alien from a fictional universe. Of course, Nyaruko falls madly in love with him. They are joined by fellow alien Cthuko and Hasuta. His life is turned upside down as they try to protect him from other monsters.

This anime does everything bad on purpose, but pulls it off so well that it makes you laugh. If you love random comedy, this one is for you.

That is it from today’s post on Top 10 Best Harem Anime You Must Watch. If you do not agree with the points in the post and have some of your own opinions, share them with us in the comments section down below. Keep visiting Animesoulking for more information about Anime and Manga.

Chandan is the writer of “Top 10 Best Harem Anime You Must Watch”. Also, Connect with me on YouTube and Facebook.