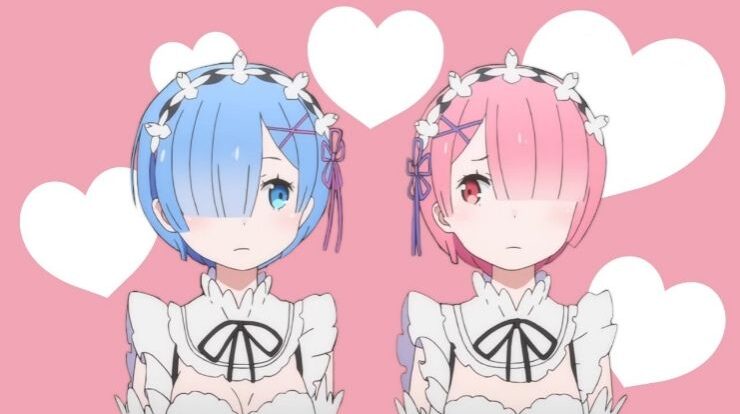 Top 10 Best Anime Twins List – Hey guys!. In this post, I’ll be discussing a list of Top 10 Best Anime Twins List. Not only in the real world, but in the anime world there are also some typical twin characters. It describes the uniqueness of each character and their behavior that will usually be different from one another. Today, I’ve picked up top ten best twin characters in anime. So, let’s get started.

10. Kururi and Mairu Orihara From Durarara!!

Kururi Oihara and Mairu Orihara are twin and also the younger siblings of Izaya, one of the protagonists in the anime Durarara. Kururi and Mairu were also raised by their brother Izaya because their parents often worked abroad. Born as twins, they are physically similar, having brown eyes and brown hair. But, they are different in personality; Mairu who always talks with enthusiasm and sometimes vulgarity is different from Kururi who is a quiet person and an expressionless face. If you look at them thoroughly, Kururi is a little wiser than Mairu. Even so, they regularly attended martial arts classes and they were also pretty skilled fighters.

9. Ako and Riko Suminoe From Kissxsis

Ako Suminoe and Riko Suminoe are twin who have an adopted sister named Keita Siminoe. You could say that as twin, they have their own strengths and weaknesses. In the story, Ako is a person who is mature, responsible, and good at cooking, in contrast to Riko who is not good at cooking, but dares to be open about her personal life. Apart from all of that, their nature is also different from each other. Ako is temperamental and sometimes childish, while Riko is a person who is soft when speaking and sometimes stiff. One thing they have in common is that they both like their adopted brother, Keita.

8. Ryou and Kyou Fujibayashi From Clannad

Ryou and Kyou are twins, where Kyou is the older sister of Ryou Fujibayashi. Although being twins, Ryou and Kyou have very different personalities. Kyou is a girl who is quite rude and aggressive, in contrast to Ryou who is a soft and smart girl, even though she can’t cook. Kyou really loves her twin sister despite her being harsh sometimes. They also have a slightly different physical appearnace; Kyou is a long-haired girl and has purple eyes, while Ryou is a short-haired girl and has blue eyes.

7. Yuuko and Hideyoshi Kinoshita From Baka to Test

It is said that even though they are twins with different genders, the similarities of their faces are very similar. Hideyoshi is a boy who is considered very beautiful like his twin sister, Yuuko. Because of this similarity, Hideyoshi often misunderstood as a girl, that’s why he always gets difficulties everytime he wanted to enter the bathroom. Even though they are said to be identical, their achievements in school differ greatly. Yuuko is one of the best students in class 2-A, while Hideyoshi is in the 2-F class, which is the class that lags behind in Fumizuki academy.

6. Sora and Haruka Kasugano From Yosuga no Sora

It tells the family life of twins whose parents were died. So that they are trying to survive together. Unlike Sora, Haruka is told as a boy with a manly figure and honest personality, while his twin sister, Sora is a girl who has a weak body since birth. The less affection she’s got from her parents makes her tends to withdraw from society.

5. Yukio and Rin Okumura From Ao no Exorcist

They are twin brothers who were raised as satan. Rin is the older brother, while Yukio the younger brother. Different from his brother, Yukio is a straight child with good character, he is also the youngest person who pass the Exorcist qualification exam and get a Meister degree in doctors and dragons. Yukio also serves as a teacher at the True Cross Academy, which ironically, he taught his own brother, Rin. As an older brother, Rin is also very protective of his younger brother Yukio who aims to surpass him one day.

4. Nana Astar and Momo Belia Deviluke From To Love-Ru Darkness

Nana and Momo are twins and also the younger sisters of Lala. Nana is the second daughter, while Momo is the third daughter of the Deviluke family. Although they have lots of similarities, Momo is rather well-endowed for her age (much to Nana’s angst) and the more mischievous of the twins.

3. Kaguya and Yuzuru Yamai From Date A Live

Actually they are the fifth spirit that appears in the Date A Live anime, but then that spirit called Yamai is somehow separated into two with different names, they are Kaguya and Yuzuru. Although they are twins, Kaguya and Yuzuru have different thoughts and personalities. It is said that they always compete to determine the winner as the best Yamai.

2. Mion and Shion Sonozaki From Higurashi When They Cry

Mion and Shion are the best psycho twin characters of all time. Compared to Shion, Mion is a more mature girl, stable in mind, and a bit tomboyish. She is also the heir to the house of the Sonozaki family. In contrast to Mion who is famous for her mental disorder in a very extreme stage and her brutal nature has become the hallmark of Mion.

1. Ram and Rem From Re:Zero

They are the twin maid demon girls from the Roswaal family. Rem is depicted as having short, blue hair that covers her right eye, with a kind heart. While Rem, who has short red hair. Unlike her older sister who likes to talk offhandedly, Rem tends to speak in a polite manner. Ram and Rem come from the Oni or devil race, they can bring up horns on their foreheads, but because of Ram’s past, now only Rem who still has the horns.

That is it from today’s post on Top 10 Best Anime Twins List. If you do not agree with the points in the post and have some of your own opinions, share them with us in the comments section down below. Keep visiting Animesoulking for more information about Anime and Manga.