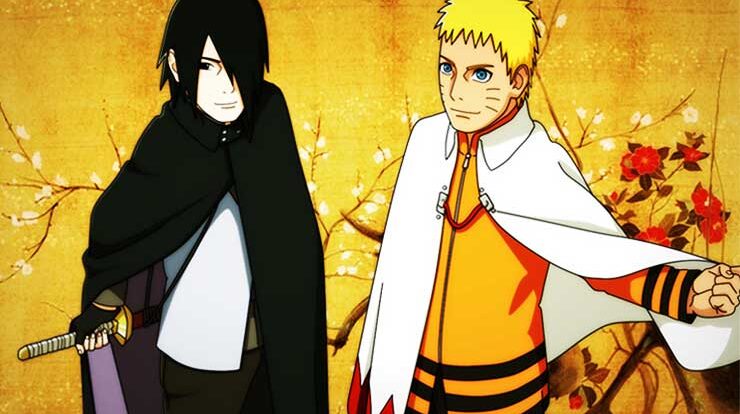 During his battle with Naruto and Sasuke, it took the effort of both of them to overpower and defeat him. Now, we know that before the battle most of Naruto’s chakra had been extracted by Momoshiki and Sasuke on other hand spent most of his chakra using the teleportation jutsu. It is therefore
possible that they could defeat him 1vs1 at full power but it could still go either way.

While many say Naruto and Sasuke have individually surpassed Madara, it is very difficult to tell. After becoming the ten tails jinchuriki, getting his 2nd Rinnegan and awakening the Rinne Sharingan, Madara became so strong that he could take-on the entire team 7. Now I have no doubt that Naruto and Sasuke would defeat him without too much difficulty if they fighting together but 1vs1, I think he could still take them.

Hagoromo was the first person to awaken the Rinnegan and he’s also the creator of six paths senjutsu. He was the first ever jinchuriki of the ten tails and later splits it into nine different tailed beasts after defeating his mother Kaguya with the help from his brother. With his power given to Naruto and
Sasuke, they were able to seal his mother Kaguya again. It would take the effort of both to stand a chance against him.

Kaguya is considered to be strongest character in the series. The only way to defeat her is to seal her and this is due to the fact that she’s immortal. The first time she was sealed, it tool a combined effort of Hagoromo and Hamura. When she was revived by Zetsu in the war, it took Naruto and Sasuke to seal her again. They’ve gotten a lot stronger since then but I don’t think they can defeat her 1vs1.

Chandan is the writer of “Top 10 Strongest My Hero Academia Characters”. Also, Connect with me on youtube and Facebook.