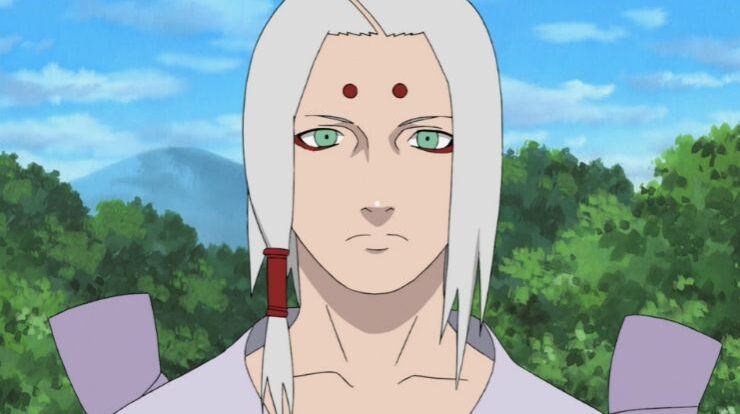 Kimimaro possessed a Kekkei Genkai known as Shikotsumyaku (Dead Bone Pulse) which allowed him to manipulate his skeletal structure at will. He could manipulate the shape and number of bones as well as the location of calcium deposits for greater versatility. He could create weapons of bones that can protrude from any part of his body, or could pull them out and use like hand held weapons. He could even grow an entire forest of gigantic bone blades, and merge with one of them to climb out from underground. He also possessed the cursed mark gotten from Orochimaru.

We can’t say much here since there’s no feat or hype or portrayal showing Kimimaro’s prowess in genjutsu, being immune, able to break out or cast one himself. The databook also doesn’t do justice to him in the genjutsu department.

Kimimaro showed incredible taijutsu skills both when he was alive and in the war when he was reanimated. His abilities made him well suited for close range combat, demonstrating tremendous taijutsu skills combined with equally impressive speed and agility. He got rid of several hundred Kyuubi influenced Naruto clones with ease. He could keep up against Lee a taijutsu master with the latter being in his drunken state. In the war, he easily dispatched of numerous samurai with ease using taijutsu. His skills in hand to hand combat mainly involves combining taijutsu with Shikotsumyaku to form many deadly “dances”.

Kimimaro’s speed and agility was also very impressive, able to keep up with Lee who was also immensely fast himself and unpredictable while using the drunken fist. His speed was mostly shown in the war when he was reanimated, enough to speed blitz and rampage through the 5th’s division samurai without any one of them laying a finger on him. He could also dodge Naruto’s Kyuubi Chakra Mode enhanced Rasenshuriken which is usually fired at incredible speeds and not many people can dodge it.

Kimimaro possessed immense strength, able to pull himself out of Gaara’s chakra infused sand, which is normally difficult to do, due to its sturdiness. While using the curse mark level 2 though he becomes much slower his physical strength increases tremendously to the point where he could smash through Gaara’s sand defenses with his punches.

Kimimaro’s level of intelligence cannot really be determined. We can only use the fact that he was normally a prodigy with incredible skills, which is more or less closely associated with intelligence. He was capable of mastering the cursed seal to the point where even Jugo, the original source was impressed, stating that he had great enough skill that he could do a partial transformation.

Kimimaro showed immense durability during his battle with Lee and Gaara. The cursed seal further made his body thicker and harder enough to prevent Gaara’s sand from penetrating. His extreme durability alongside his bones which he claimed to be stronger than tempered steel granted him an incredible defense, able to withstand from being crushed by being buried under 200 meters of compressed sand made by Gaara. For normal defense he could protrude bones from his body to defend himself against physical attacks.

Kimimaro’s chakra cannot be measured except that he easily dispatched hundreds of Kyuubi influenced clones which were created by Naruto without breaking a sweat. Also being able to manipulate your bone structure must require a great deal of chakra. He also seemed to be able to spam this technique throughout his battle with Naruto, Lee and Gaara which indicates much more than average chakra reserves.

Kimimaro also had very strong endurance, as when his failing body would be physically impossible to move, he managed to force it through sheer willpower and still proved to be a deadly opponent. He had the stamina to battle Naruto, Lee and Gaara one after the other without collapsing despite his sickness and being in a dying state.

We can see that Kimimaro is up there in every stat except for Summoning, Genjutsu and Ninjutsu but even if he doesn’t have a large Ninjutsu arsenal his Kekkei Genkai is very deadly which pretty much makes up for it. Let’s continue to determine how strong he is.

What Tier is Kimimaro?

We know that Kimimaro was able to subdue the Sound Four effortlessly despite all of Orochimaru’s test subjects. Kimimaro was his primary choice for a host and only turned to Sasuke when he discovered Kimimaro had an incurable illness. Kimimaro took on Gaara (who was himself very powerful at that time) and only lost to Gaara because he was dying. It seems even Kabuto himself portrayed Kimimaro to be above his level when he said Kimimaro was on a different level. Taking all of these into consideration I will put his sick version in the “High Jounin” tier. We could say Gaara defeated his sick version since he couldn’t go on attack further for a final blow and we can’t possibly put that Gaara above High Jounin. Assuming he was healthy, he would obviously be much more powerful and could’ve killed Gaara so “Low Kage” is fair.

For his sick version I will say he beats part 1 Kabuto seeing all the hype Kabuto gave him and it actually looks plausible. We are not sure Kabuto could easily subdue the Sound Four back in part 1. It is fair to say he lost to Gaara, so I see most Konoha Jounin beating him. His bone forest could give them trouble though. For his healthy version, he will be much stronger and wouldn’t have to worry about his health. I now see him beating most Konoha Jounin 1vs1 and beating Part 1 Kakashi as well. I can also see him beating Shippuden Neji. On the other hand Hebi Sasuke most likely beats him, beginning of Shippuden Gaara also as he was far stronger than he was against Kimimaro.

That is it from today’s post on How Strong is Naruto Kimimaro Kaguya?. If you do not agree with the points in the post and have some of your own opinions, share them with us in the comments section down below. Keep visiting Animesoulking for more information about Anime and Manga.

Chandan is the writer of “How Strong is Naruto Kimimaro Kaguya?”. Also, Connect with me on youtube and Facebook.