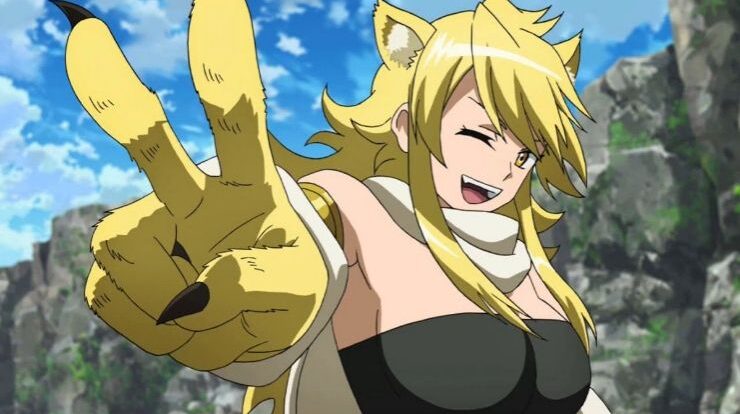 Top 10 The Most Beautiful Furry Anime Girls – Hey guys!. In this post, I’ll be discussing a list of Top 10 The Most Beautiful Furry Anime Girls. In the world of anime anything can be done, from things that make sense to things that make no-sense. Maybe, for those of you who have a weird fetish, the word furry is familiar. Furry itself is the term for humans who have a body or appearance like an animal. Even though they can be called human, furries can use their animal instincts like the animal behavior and habits in nature. Today I’ll give you the list of the most beautiful furry girl characters in the anime. So, let’s get started.

Ichigo is the main protagonist in the anime Tokyo Mew Mew and the first of the Mews to be introduced. She was infused with Iriomote Wildcat’s DNA, and her Mew form is Mew Ichigo. Ichigo is about 12 years old, but was raised to 16 in Mew Mew Power. Ichigo is part of the students at Daikan Middle School. In her spare time, she works at Café Mew Mew with other girls. Ichigo is also a very smart and hyper-active girl who likes to spend time with his friends. Although friendly and hardworking, she sometimes cannot control herself emotionally, which in the end she gives up on her animal instincts and acts like a cat.

Eruruu is the older sister of Aruruu. Eruruu is a beautiful young girl with the wolf ears and tail. She also has big brown eyes and dark gray hair. She has short stature for girls as her age. Eruruu is a strong-willed and caring girl. Also, she will put all her heart and effort into doing the things she should do. As a sister, Eruruu always protects her younger sister, even she often scolds Aruruu.

Blair is known as the cat witch. She is very good at understanding others and even shows kindness to others who have problems. She likes to seek fun and as well as to have fun. In human form, Blair takes on the appearance of a young girl with average height. In human form, she has purple hair and the various jewels that can be seen on her neck. Despite being in human form, she has cat ears and also retains her cat-colored eyes. Similar to the mythical cat animal, she as a cat monster is able to live 9 lives at once in her life, which means she can only die permanently when her 9th life has expired.

Haineko is the real form of Zanpakuto’s spirit that Rangiku Matsumoto has. She is a beautiful woman with full of confident towards her beauty. She acted harshly towards Rangiku and often referred her as an old woman. When Shikai, Haineko released the Zanpakuto with the command “Growl”, and then the blade would turn into a cloud of ash that could cut through anything and slash its enemies.

6. Carrot From One Piece

Carrot is a Mink rabbit which comes from an animal tribe, one of Inuarashi’s Musketeer troops. Carrot is a young girl as well as a Mink rabbit with white hair and blonde hair and a long round tail. Like the habits of rabbits in general, she really likes gnawing things. Despite having a rabbit physique, Carrot is born as a natural fighter who is very tough and can have a considerable amount of stamina, allowing her to be active all day long.

Millianna is one of Erza’s childhood friend who is also become slave in the Tower of Heaven. After working as Jellal’s subordinates, she then joined the Wizarding Guild, that all of its members were Mermaid Heel. Millianna is a woman with average height and attractive body. Millianna is famous for her appearance as a cat; she has eyes, nose and mouth similar to that of a cat. She is also the type person who is very cheerful and passionate. Millianna was one of the children who were forcibly taken from their homes and forced to build an R-system, or commonly called the Tower of Heaven. This is where she met Erza, Jellal and others.

Rachnera is an Arachne and one of the harem girls in this anime. Even though she already had a host family before, in the end, her adopted family had sold her because of being scared of her. This made Rachnera hate humans. But since her encounter with Kurusu, she started to pay attention to him. Rachnera is a young woman with short lavender hair. As an Arachne race, she has 6 pupils, and monochromatic red eyes, not forgetting the sharp and pointed teeth. Its most visible physical feature is the lower part of the humanoid body, which takes the shape of a giant spider with a large skull design. Rachnera is very intimidating and also likes to provoke other people, even sometimes she can be a sadistic girl.

Leone is one of the members of the Night Raid and one of the calm members when assessing enemies. Leone is a beautiful girl with a blonde hair and golden eyes. She can transform herself into a humanoid lion form, by having longer hair and not to mention the lion’s ears and tail. This can happen when she fuses with her Teigu which gives her the appearance more like a beast. Leone has a very relaxed, cheerful personality, and tends to show a lack of female behavior. As a smart and cheerful person, she will not tolerate injustice and can act very cruel to those who commit evil actions.

2. Holo From Spice and Wolf

Holo is a wolf demi-human. She is the female protagonist from the anime series “Spice and Wolf”. She is a half-human wolf who was bound by promises to the city of Pasloe for several centuries, to ensure a bountiful wheat harvest for the residents. But as time went on, the residents became more independent and began to neglect the Holo. Feeling useless, she finally wanted to return to her homeland in Yoitsu, where there is a snowy place. Holo will appear with a different figure, but basically she appears with a beautiful woman with her loose hair.

Koneko is one of the female protagonists of the anime series High School DxD. She is a student at the high school at Kuoh Academy and also a member of the occult science research club. She is a Nekoshou, a rare species of Nekomata and the younger sister of Kuroka. At the beginning of her appearance, she is a quiet and cold girl that rarely shows any feelings and emotions even when talking. But after going through various problems, Koneko finally started to act like an adorable cat that she began to show her emotions and her loving.

That is it from today’s post on Top 10 The Most Beautiful Furry Anime Girls. If you do not agree with the points in the post and have some of your own opinions, share them with us in the comments section down below. Keep visiting Animesoulking for more information about Anime and Manga.

Chandan is the writer of “Top 10 The Most Beautiful Furry Anime Girls”. Also, Connect with me on youtube and Facebook.