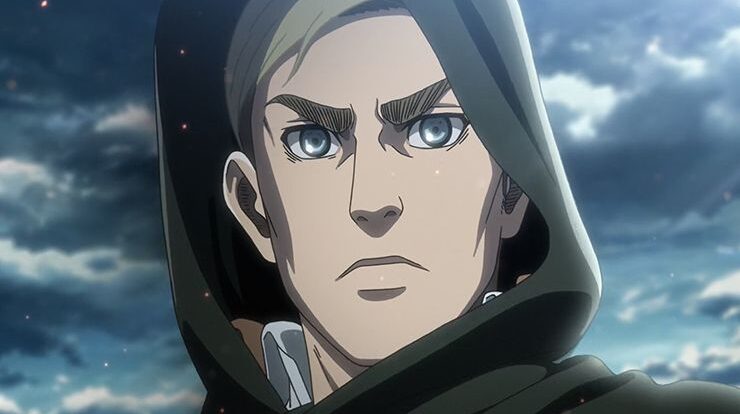 These titanic symbols of oppression and terror are part of the doom of the Eldians, but they don’t get away with it, because against them there are the members of the Survey Corps who try and do their best to oppose, but at the end of the day they are flawed. The fact is that humans also survived because they were being protected by strong fighters, the best of the best even among thousands!

Today, you will remember, or more likely know the best names in the Troop! We will evaluate factors such as: Numbers of Titans killed alone, i.e. in 1v1, 2v1 and beyond; Attack on Titan Official Guide Data; Demonstrations or quotes from the anime and manga. With everything cleared up, let’s start from the weakest to the strongest!

Last in strength and first in this ranking, but far from being less important, is the soldier Gunther Schultz, whose blades are stained with the blood of at least 7 titans that he has killed alone. He has 7 points in ”combat” and initiative, 8 points in ”witty” and ”teamwork”, and 10 points in… ”Ellipses”? Well, you’ll understand. Gunther is an elite soldier and has been chosen for the Special Operations Squad.

He was one of the record holders in group slaying of titans, which indicates their great work together. He was also a great DMT user and had good intelligence and tactical analysis, as in one mission, he observed that Erwin omitted one of the expedition’s real intentions.

Well… He is also one of the few that exceeds 10 points, but in a different category, as he has 11 out of 10 in drunkenness. And he dies sad, as he had an empty bottle and nothing to drink while being captured by a titan.

Hange, through his studies on the titans, developed various means of combat and containment against them. She made many contributions to the fight against the titans, such as techniques in the use of DMT, which was her forte and creation of the Spears of Thunder.

Alone, she exterminated at least 5 titans. Her balance and extreme scores make her a formidable opponent in battle, as she possesses extreme intelligence and great determination.

Eld Gin occupies this seventh position. He is one of those who have the greatest balance between his points, as he has 8 out of 10 in ”combat”, 7 out of 10 in being ”witty”, ”initiative” and in ” teamwork” ‘. His memory is great, having the maximum score. He is another record holder in killing titans, between group and solo kills, he dealt with 14 titans single-handed.

He was extremely skilled in the use of the DMT, as he coordinated his very technical and tactical moves with his other teammates. Not to mention his skill in swordsmanship, which led to him considerably damaging the Female Titan’s arms. He also assisted Levi in ​​managing the team, being someone extremely trusted by the captain.

This position belongs to a record holder in the extermination of titans. Counting 39 titan kills alone, Oruo Bozad is in sixth place. His tactical acumen is such that he coordinated with the rest of the Special Operations Squad without even speaking.

His ”combat” score is 9 points out of 10, living up to so many easily killed titans. However, he ranks somewhat low for the rest of his scores. He has a 6 in ”initiative”, a 5 in ”witty” and a 5 in ” teamwork”. And if it counts for you, he’s good to curse, because he has the maximum 10 points! lol

Fifth is one of the most complete Shingeki no Kyojin fighters… we are talking about Jean Kirschtein. Jean is one of the best DMT users. He is adept at using the device outdoors, which is considered extremely difficult.

He is able to dodge and engage titans in strategic moves to hit their necks, in addition to being agile enough to manage to ambush an entire Marley infantry that was on high ground, specifically on top of a roof. His use of DMT is improved when we remember his 9 points out of 10 in ”combat”, his ”initiative” of 8 points out of 10, and how ”witty” he can be, possessing a 7 out of 10 points.

He is always in balance and possesses wisdom and wit in the tactical medium… This, with his good use of firearms like rifles, and explosive weapons like Thunder Spears, earned him the sixth best place among the Hundred and Fourth Squadron of Recruits … And Jean exterminated at least 3 titans.

The Thirteenth Generation Commander of the Exploration and Survey Corps isn’t just good at sending others to die… but he’s good at killing, too. That got a little weird, since he’s good to kill anyway… but you get the idea! There are no certain numbers of Titans killed by him, but we must give him that vote of confidence. Fit to become a Commander, he was certainly a capable combatant.

His audacious strategies see him possessing high technique and enormous decision-making ability in 1v1 combat or in other situations… so that’s why he ranks fourth.

He is said to be Levi’s second, that is, considered the ” Second strongest soldier of humanity ”. His combat skills and his sense of smell that allowed him to sense approaching titans, made him able to exterminate at least 6 titans, but we know that number is too low for him. You could say he wiped out at least quadruple Mikasa, although he’s still below her.

All these scores led us to believe in its presence as the top 2 of this ranking. In strength, Mikasa can effortlessly lift crates and crates of equipment, can comfortably carry 8 Thunder Spears and unload them at the same time on a titan… and with training she has become the ultimate wielder of this weapon.

Mikasa has also faced and even overwhelmed Annie in her female titan form, a feat that other veterans have failed to do. As Ackermann already with awakened power, in addition to having superhuman control and physical attributes , she also possesses all the combat secrets of the Ackermann Clan.

Mikasa exterminated at least 11 titans alone and at the beginning of the work, she is mentioned by the narrator as a ” unique example ” of the Corporation’s history. That might be a little below the average we’ve seen so far, but what really counts are its scores and canonical accomplishments.

This one needs no introduction, because its renown transcends the small screen and reaches other fandoms of other works. Levi Ackermann, a soldier of the captain rank, is Mankind’s Strongest Soldier and, by far, the strongest human. He simply has 11 points out of 10 in the ”Combat” area of ​​the Official SNK Guide and has 10 points out of 10 in the ”Initiative” area.

Although he has the small 2 points out of 10 in ”Teamwork”, it hardly matters. He is an awakened Ackermann who possesses all the fighting knowledge of his Ackermann lineage, as well as being a Beast Titan and Female Titan destroyer. We won’t talk too much about his accomplishments here, because everyone already knows his potential.

In case of a titan attack, we already know our 10 protectors. This ranking can be changed, as some characters have very little differences! There is only a large margin from the third down, who knows from the fourth down.

That is it from today’s post on Top 10 Strongest Survey Corps Soldiers in Attack on Titan. If you do not agree with the points in the post and have some of your own opinions, share them with us in the comments section down below. Keep visiting Animesoulking for more information about Anime and Manga.

Chandan is the writer of “Top 10 Strongest Survey Corps Soldiers in Attack on Titan”. Also, Connect with me on YouTube and Facebook.