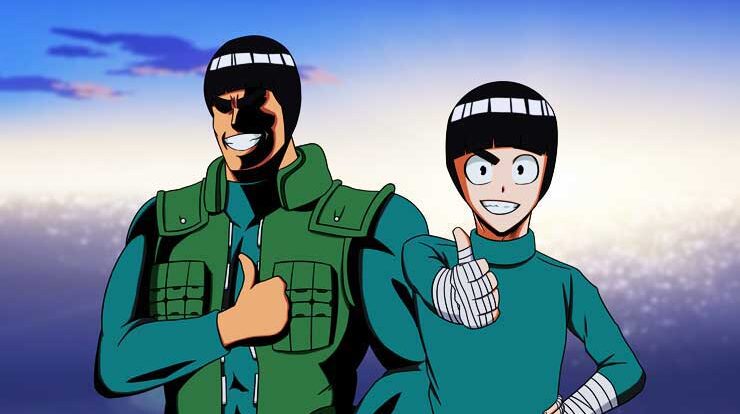 Among the three legendary sannin, Jiraiya was actually the least talented one (The other two being Orochimaru and Tsunade). Orochimaru was the prodigy among them meanwhile Tsunade although not on orochimaru’s level was close. They were almost always ahead of jiraiya in everything. However, Jiraiya through sheer dedication and hardwork learned incomplete sage mode and other techniques. He became very powerful such that he could battle against six paths of pain while defeating three of them without prior knowledge on their abilities. I believe if we exclude edo tensei for orochimaru, Jiraiya is the strongest sannin.

If one resorts to using the inner gates, it can only mean they’re incapable of using ninjutsu or are very poor at it. During his time in the academy, Lee’s performance was looked down upon for his inability to use either ninjutsu or genjutsu. Guy, who sensed in lee the same hardships and determination he had as a child, he took him as a student and under his guidance, Lee became a master taijutsu specialist. He could open five of the eight gates at the age of 12. At this point in boruto he’s one of the strongest shinobi alive and it is possible that he may be able to open the final gate (Eight Gate of Death).

The Uchiha are known for producing immensely talented ninja but this wasn’t the case for obito in the beginning. He was portrayed to be far behind kakashi his teammate and friend in talent. However, after being saved by madara when everyone thought he has dead, Obito went on to acquire power after power and eventually becoming one of the strongest character in the series and the strongest even at one point during the fourth great ninja war. So, we can see that obito was a late bloomer.

Just like lee his student, Guy wasn’t particularly talented in ninjutsu and genjutsu and thus had to choose taijutsu. He mastered taijutsu at the highest level and through the inner gates, he was the best taijutsu user in the series. He surpassed kakashi at one point when he open the eight gates who although was his rival ahead of him when they were young. Using the seventh gate he was able to defeat kisame, a powerful akatsuki member and using the eight gate, he could battle and inflict damage upon madara who was the ten tails jinchuriki.

Naruto is like the replica of jiraiya in everyway. Just like jiraiya, He was the slowest learner in the team seven from the beginning and just like him, he eventually became the strongest in the team. Despite the slow start, He went on to master the Rasengan, Summoning Jutsu, developed his own jutsu from the rasengan “Rasenshuriken”. He went on to master sage mode, control the power of the nine tails which was sealed within him from birth and after meeting the sage of six paths, he awakened six paths senjutsu. Thus becoming one of the strongest shinobi in the series and the strongest hokage/kage ever.

Chandan is the writer of “Top 5 Less Talented Shinobi Who Became Very Powerful”. Also, Connect with me on youtube.