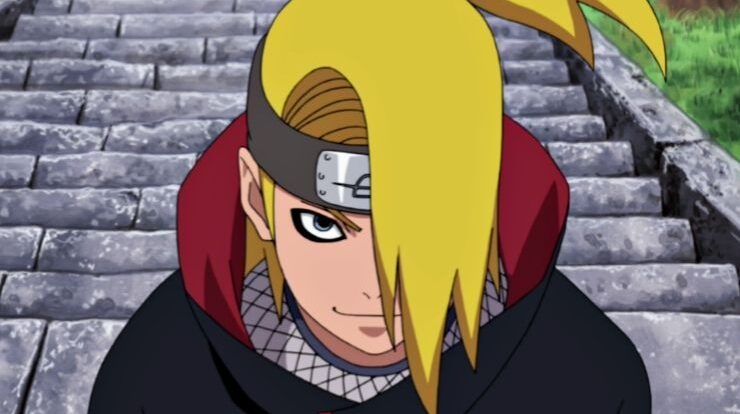 Deidara is able to use Earth and Lightning Nature Transformations which he combines to create Explosion Release. He could create different explosions of varrying sizes and power from microscopic to gigantic. He can create clones from the clay and can detonate them, which will make for a deadly surprise attack, and if need be, create clay minions to control with a cord from a distance. As an ultimate last resort, Deidara could turn himself into a bomb by devouring explosive clay that has a large blast radius which he calls his “Ultimate Art”. Some of his explosions have a wide area of effect capable of eradicating a village.

Deidara wore a scope on his left eye for long range observation. He trained this eye to counter genjutsu allowing him to see through and negate them. The main purpose of this training was so that he could counter Itachi’s powerful genjutsu skills, whom he hated and wished to defeat whenever he got the chance. He never got the chance to fight Itachi again, so we don’t know how he would have fared against his genjutsu but he surely would have been able to avoid the less powerful ones.

Deidara’s skill in Taijutsu cannot really be measured since he’s always in the air flying with his birds. He prefers keeping his distance from above while using his lethal explosives. Still he’s been shown to possess incredible reactions and thus must possess decent taijutsu skills.

Deidara’s flight speed is quite good, able to avoid Gaara’s high speed sand attacks in the air during their battle at the start of part two. As already stated, he possesses incredible reaction speed, able to avoid a high-speed blitz by Sasuke getting to the air with his bird in an instant. In the same battle with Sasuke, he managed to create clay clone in time before getting blitz by the latter.

In the strength department, we haven’t seen much from Deidara to really determine his physical prowess. He showed enough strength to dislodge the Fuma Shuriken that pierced and pinned his arms using his legs proving that he possesses decent physical strength something many shinobi should be capable of doing even if physical power isn’t their forte.

Deidara was a good battle strategist and this was one of his strong points. He will often use tricks, misdirection, and calculated gambles to get his explosives in range of an opponent. He demonstrated these skills in his fight with Gaara, putting clay into Gaara’s sand as it destroyed his arm. During his battle against Sasuke, he managed to trick him on a few occasions, such as trapping him between his C2 dragon in the sky and the landmines buried underneath the ground by Tobi, and again when he lured him into his C4 attack at point-blank.

Deidara never possessed an orthodox form of defense, but he always made sure to keep his distance high up in the air which is primarily to better execute his explosives but it could also serve as a way for him to avoid his opponents attacks and make it difficult for them to get to him. He could also substitute himself with clay clones, to avoid enemy attacks.

Deidara possesses enough chakra to continuously use his explosives in battle without running out. We could see this during his battle with Sasuke where he kept spamming his explosions. His stamina was also enough that he only showed signs of exhaustion towards the end of the battle (after a long battle) just before he used his most powerful attack (turning himself into a bomb).

We can see that Deidara lacks in a lot of areas like Taijutsu, Strength, Defense etc. which greatly affects his overall rating. He isn’t versatile enough but his fighting style doesn’t really need those. Let’s continue to determine how strong he is.

As already stated, Deidara lacks in a lot of departments but his fighting style more than makes up for it. He always makes sure he’s high up in air, the best way for him to execute his techniques while also keeping his distance from his opponents. This is what makes him very dangerous considering how lethal his explosions are. He managed to defeat start of Shippuden Gaara who was around Low Kage and could have taken Hebi Sasuke out (who is Mid Kage) but unfortunately the latter’s lightning style was a counter to his explosions. From these two fights I will put him at around “Mid Kage Level” in the same tier with the likes of Hebi Sasuke, Sasori, Kakuzu, Mei Terumi etc.

Deidara’s fighting style for me will allow him to defeat even those that are in a higher tier than him. I can see him beating almost everyone in the same tier as him (Mei, Sasori, Kakuzu) and can win against several High Kage Tiers for me like Kisame, 4th Raikage. On the other hand, he will lose to some like Tsunade or Sakura who could use Katsuyu and their 100 healings to tire him out. He will also lose to Gaara now unlike at first. He will of course lose to anyone above High Kage.

That is it from today’s post on How Strong is Akatsuki Deidara?. If you do not agree with the points in the post and have some of your own opinions, share them with us in the comments section down below. Keep visiting Animesoulking for more information about Anime and Manga.

Chandan is the writer of “How Strong is Akatsuki Deidara?”. Also, Connect with me on youtube and Facebook.