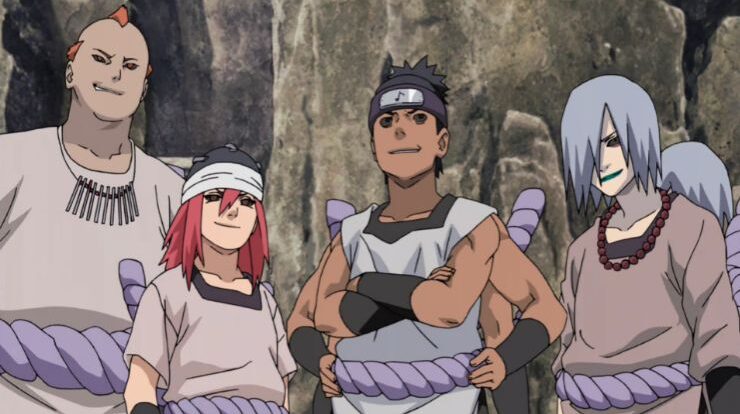 Top 10 Strongest Hidden Village of Sound Members – Hey guys!. In this post, I’ll be discussing a list of Top 10 Strongest Hidden Village of Sound Members. Most of these shinobi aren’t exactly from the Hidden Sound but due to their connections with it, they are for the most part considered to be from there. So we are basically ranking those from, and those affiliated to the Sound Village. So, let’s get started.

One of the members of a group known as the Sound Four. Jirobo is very powerful especially physically and could use earth release techniques at quite a high level. Back in part one, he was strong enough to force Choji to use the pills to defeat him and even then the battle wasn’t easy. Again, in the war arc, as a reanimation, he was once again capable of tangling with Butterfly Mode Choji, a testament to his power.

Kidomaru was also a member of the Sound Four and the most intelligent of them all. He was also quite powerful and he had the ability to make spider webs which he used to bind, trap, or sense enemies. These threads were extremely sticky, yet durable and elastic. Could also summon spiders of different sizes from gigantic to small and in large numbers. Being a long ranged fighter, he gave the very powerful Neji a rough time.

Tayuya was also a member of the Sound Four and also quite strong. Her ability was very broken, a sound genjutsu based technique which renders their target immobile once the sound reaches their ears. However, this ability could do more; It could summon 3 very strong, durable and gigantic creatures to engage her opponent physically and they possessed abilities which were capable of absorbing the chakra of her target. It took Temari, a direct counter to her abilities due to wind style to defeat her.

Was said to be the strongest member of the Sound Four even by Orochimaru. Easily handled Kiba back in part one and it took Kankuro to come to Kiba’s aid and defeat them. Could split themselves in two for more numbers and they could use sealing jutsu, summon the Rashomon Gates and were the most versatile of the Sound Four.

Karin was initially only a sensor and healer but by the Fourth Great Ninja War, she manifested chakra chains similar to that of Kushina Uzumaki. These chakra chains are powerful enough to bind Tailed Beasts and create barriers that are difficult to breach. In the war arc after being stabbed by Zetsu’s wood technique, she completely healed herself and at that same instant her chakra chains were able to destroy all the hands of the Mini Buddha that was been controlled by Zetsu.

Jugo like other members of his clan possessed the ability known as Sage Transformation “Curse Mark” which allows him to use the natural energy he absorbs to transform his body at will. He can change what form he takes almost instantly and can isolate the transformation to specific parts of his body. When he fully transforms he gains tremendous strength, speed, durability and this has allowed him to survive against powerful people like the 4th Raikage and Killer Bee.

For me the strongest among the Team Taka Members excluding Sasuke of course. He’s very proficient in using water release techniques to transform his body into a liquid form, and to return to his solid bodily form at will which makes striking him somewhat difficult since he will just liquefy himself. He was able to go up against Bijuu Mode Killer Bee for a brief period creating his own gigantic creature using water and survived against the latter’s Tailed Beast Bomb.

Despite being introduced right back in part one, Kimimaro can still tangle with characters in Shippuden and even in Boruto. For me he was already beyond the level of most Jounin and if healthy could have been Kage Level. He handled with no difficulty whatsoever 1000 Kyuubi influenced clones from Naruto. He possessed incredible taijutsu and speed. With his ability to manipulate his skeleton structure and use his bones as weapons for attack and defense as well as create a land mass of bones, he was very lethal and a combined effort of both Gaara and Lee were lucky to survive against him. To me, he’s still stronger than the Taka Members.

Without having to say much here, Orochimaru is one of the famed legendary sannin, the others being; Jiraiya and Tsunade. Portrayed at times to be arguably the strongest among them. He can use all 5 basic nature transformations and possesses numerous abilities some of which we don’t even known about. Pushed Hiruzen Sarutobi to commit suicide in order to seal off his powers. Can also use Edo Tensei one of the most broken techniques in the narutoverse.

Some may want to ask “why isn’t Orochimaru first” but I think most of us can agree that Kabuto surpassed Orochimaru once he mastered the Snake Sage Mode. Asides from that he could also make use of the kekkei genkai abilities of many, some one which includes the Sound Four. He had become very powerful, enough to take on Edo Itachi and EMS Sasuke. A good feat despite losing and he could also make use of Edo Tensei which allowed him to control the entire 4th Great Ninja War for quite a long time.

That is it from today’s post on Top 10 Strongest Hidden Village of Sound Members. If you do not agree with the points in the post and have some of your own opinions, share them with us in the comments section down below. Keep visiting Animesoulking for more information about Anime and Manga.

Chandan is the writer of “Top 10 Strongest Hidden Village of Sound Members”. Also, Connect with me on youtube and Facebook.