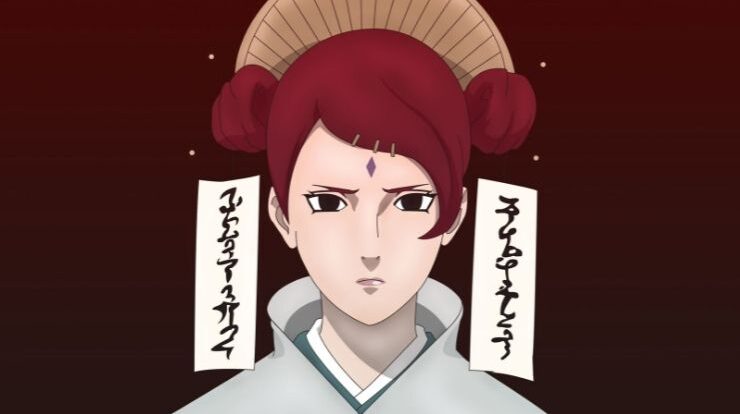 Kushina was an Uzumaki with a strong life force, which granted her tremendous chakra reserves and vitality. Her strong and immense chakra made her well-suited for becoming a Jinchuriki, effectively sealing the entirety of the Nine-Tails inside her at a young age and further enhancing her reserves. Since she didn’t manage to gain full control over the Kyuubi throughout her stay as a Jinchuriki, she couldn’t access Kyuubi’s entire reserves of chakra but with her already monstrous reserves the little she could draw from the Kyuubi would take it to another level.

Mito was the wife of Hashirama and also an Uzumaki. Her skills in fuinjutsu allowed to seal the Kyuubi within herself which will further enhance her chakra reserves. She didn’t gain full control over the Kyuubi but it seems she was able to control it to a certain level maybe use some of its chakra cloaks. This is so because she was able to make use of Kurama’s ability to sense negative emotions, something we’ve seen only KCM Naruto do. This must mean she had access to a huge chunk of Kurama’s chakra which adds to her own already huge reserves.

The 3rd Raikage was hyped to possess Tailed Beast Chakra Reserves enough to seal the 8 Tails inside the Sealing Urn after its numerous rampages. His chakra alongside his stamina allowed him to battle against 10 Thousand Shinobi for 3 days and nights before finally collapsing. This is something only shinobi with Tailed Beasts Chakra Reserves can accomplish. In fact even possessing Tailed Beasts Chakra Reserves doesn’t guarantee one can battle for up to 3 days. That isn’t all as he was also able to battle the 8 Tails “Gyuki” to a stalemate where both collapsed at the end.

Another Uzumaki with monstrous chakra reserves. Nagato’s reserves and stamina were enough for him to handle 2 Rinnegan and use its chakra taxing techniques repeatedly without running out of chakra. Nagato’s reserves were such that he could distribute it among 6 Pain Bodies assigning a Rinnegan Path to each of them. Pain will go on to use a huge amount of chakra to perform catastrophic Shinra Tensei which will destroy Konoha. Nagato’s reserves however will allow Pain to continue fighting against Sage Mode Naruto, 6 and 8 Tails and then perform Chibaku Tensei to trap the 8 Tails. Nagato will still have enough chakra to revive dead shinobi from Konoha.

At a young age Bee already possessed the life force and chakra necessary to house the 8 Tails. He would then become its Jinchuriki further increasing his reserves. Killer Bee was able to gain full control over the 8 Tails thus had access to its full reserves of chakra. Tailed Beasts are not equal in chakra reserves and the 8 Tails should have more chakra than the first seven Tailed Beasts. This is the amount of chakra Bee is able to control and without a doubt is among the shinobi with most chakra in the series.

Hashirama is the direct reincarnation of Asura Otsutsuki possessing immense chakra reserves. Hashirama’s chakra was enough for him to master senjutsu and he would go on to battle against Madara and the 9 Tails for 24 Hours performing high scale jutsu repeatedly which require a huge amount of chakra. Most shinobi will only last a few hours if they are to perform a jutsu on the scale Hashirama did repeatedly. Hashirama’s reserves was compared to that of Naruto who was in possession of an entire half of Kurama and had shared his chakra to the entire shinobi alliance. If Hashirama’s reserves is comparable to Kurama’s then no normal shinobi should even come close to him.

People may be tempted to ask, why is Sasuke above Hashirama but we shouldn’t forget that he received half of Hagoromo’s Six Paths Chakra and should now be producing his own Six Paths Chakra. In the war Six Paths Chakra was powerful enough to grant Sasuke a Perfect Susanoo and allowed him to battle continuously and repeatedly use his techniques against Six Paths Madara, Kaguya without running out chakra up until his battle with Naruto. He’s also the reincarnation of Indra, so he was meant to have huge chakra reserves anyway.

Obito became the Jinchuriki of the Ten Tails. Yes the Ten Tails which is the embodiment of chakra and could make use of its chakra as a Perfect Jinchuriki would. He could use his techniques however he wanted and at what scale he wanted without any issue. The only problem is, he didn’t possess the entire Ten Tails; he was still missing half of the 9 Tails, the 8 Tails and the Shinju Tree which is in itself a huge chunk of the Ten Tails Chakra. This would’ve further taken his reserves to another level.

Here again one might ask why is Naruto above Obito since Obito has the Ten Tails which has way more chakra than the 9 Tails. Naruto doesn’t only have access to the full 9 Tails now but he also has half of Hagoromo’s Chakra which he received in the war as well as chakra from the other Tailed Beasts. We also know that Naruto already possessed monstrous chakra reserves of his own before all these additions. His reserves were such that he battled repeatedly for the entire Fourth Great Ninja War and in Boruto Momoshiki took a very long time trying to absorb his chakra but still only managed to extract a little bit more than half.

Unlike Obito, Madara had access to almost the entire Ten Tails. As the Ten Tails Jinchuriki he had all 9 Tailed Beasts and only lacked half of the 9 Tails since Obito forcefully took it from him and returned it to Naruto. As he was getting pushed back by Naruto, he absorbed the God Tree which in itself should be a large portion of the Ten Tails Chakra. Preparing for the final showdown against Naruto and Sasuke he now had access to almost the Full Ten Tails (only lacked half of Kyuubi). Since the Ten Tails is the greatest chakra entity in the series and Madara had almost all of it, he should be the shinobi with the largest chakra pool.

That is it from today’s post on Top 10 Characters Who Has The Most Chakra in Naruto. If you do not agree with the points in the post and have some of your own opinions, share them with us in the comments section down below. Keep visiting Animesoulking for more information about Anime and Manga.

Chandan is the writer of “Top 10 Characters Who Has The Most Chakra in Naruto”. Also, Connect with me on youtube and Facebook.