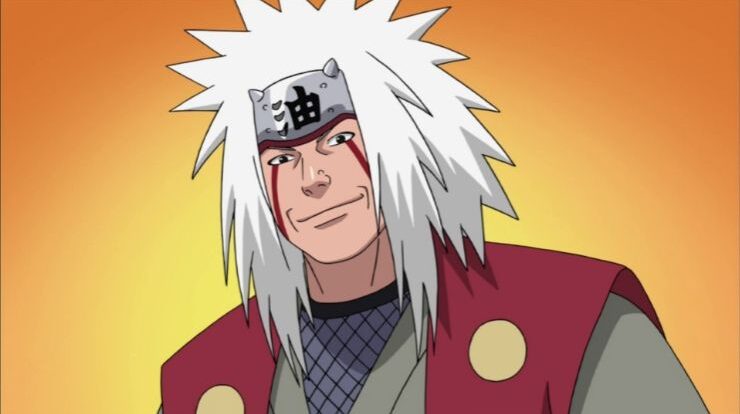 Jiraiya possesses a variety of Ninjutsu Techniques being able to use Water, Wind, Earth and Fire Release Nature Transformations proficiently. He is skilled in Sealing Techniques, can spit oil from his mouth, use the Toad Swamp Technique, Foot Cart Destroyer, hide within surfaces, manipulate his hair for offense and defense. He can also use the Summoning Technique, Barrier Ninjutsu. With Senjutsu he’s capable of using the Giant Rasengan, Sage Art: Goemon.

Jiraiya, whilst in Sage Mode and fused with the Toad Sages “Fukasaku and Shima” is able to benefit from their Sound Genjutsu “Frog Song” which is powerful enough to affect anyone if it gets to reach their ears. Jiraiya was also skilled in avoiding or breaking genjutsu as shown when he attempted to teach Naruto to do same several times in their training. Sage Mode can also enable him to fight without having to make direct eye contact with opponents that use visual genjutsu.

Due to the increase in reflexes, sensory perceptions and power provided by Sage Mode, Jiraiya’s taijutsu is significantly augmented. Initially, the pain paths were able to keep up with him due to their shared vision but once said vision was broken, Jiraiya began to overwhelm them since they had to engage him in a 1vs1 without their shared vision. In seconds and with a single kick he got rid of one of the pain paths.

Jiraiya was already very fast in base, able to intercept Kisame’s blade just before it made contact with Naruto back in part one. Fast enough to catch Konan off guard and executed a lethal fire release technique on her. Sage Mode only further enhanced his speed as well as his reactions which would allow him to blitz a pain path.

Sage Mode comes with immense physical strength. With a single kick Jiraiya sent a pain path flying while completely knocking it out. He was physical enough to kick away some of the Giant Multi-Headed Dogs that were engaging him. He could also lift and throw away large boulders with little to no difficulty.

Jiraiya was very goofy as a kid but he was far from being dull. As an adult he proved himself to be very intelligent, possessing immense knowledge about the shinobi world made possible by his speciality. His speciality “Intelligence Gathering” where he spys throughout the Five Great Shinobi Countries to gain information about a particular person or group to be used to his or his allies advantage. In battle he’s able to quickly deduce the ability of his opponents as seen against Pain. Without prior knowledge he managed to take down 3 Pain Paths and in the end paved the way for Pain’s defeat by figuring out their abilities.

Jiraiya’s proficiency in several nature transformations provides him with options for defense. He can counter an opponents nature release techniques with his own and can use earth/mud walls for defense. He is able to grow and manipulate his hair “Hair Needle Senbon” either to bind and destroy targets or to surround him as a defense. It is not overly powerful as a defense but can protect him from dangerous attacks.

Due to his affiliation with the toads at Mount Myoboku, Jiraiya can summon toads for several purposes. He can summon them for battle which they could do independent of him, can summon a toad’s oesophagus to cover an area and restrict any movements within that area. He can also summon the Two Great Sage Toads to fuse with them, who will constantly gather nature energy for him.

As with chakra, Jiraiya also possesses high stamina. After a long battle against Pain, he was still able to withstand a lot of assaults from Pain before going down. Even when he was at his limit, he decided to keep going until he deciphered the mechanics behind Pain’s abilities and he did, which will later be the primary factor of Pain’s defeat. A testament of Jiraiya’s immense endurance.

From his ratings in the different stats we can see that Jiraiya is an all round shinobi, not really lacking in any particular stat department. We will continue to determine how strong he is in Base and in Sage Mode.

What Tier is Master Jiraiya Naruto?

Jiraiya has a very powerful base form since he can use almost all of his techniques in base. Without any kind of difficulty and in a short time, he was able to handle Konan who is border line mid tier in the Akatsuki. He can still use Toad Swamp, Summoning, all his Nature Releases etc. In base, so even without Sage Mode he will not be an easy opponent. For his high versatility in base I put him at “Mid Kage Level”. Sage Mode obviously puts him a tier higher; all his physical parameters as well as the scale of his jutsu improve considerably and he now benifits from the Toad Sages Techniques. To be able to take down 3 Pains without any intel is something only for “High Kage” and above. Even some High Kage under the same conditions will not be able to replicate his feat.

In his base form I can see Jiraiya beating most Mid Kage Shinobi considering his Summoning, Nature Transformations and a variety of techniques. But I see Tsunade beating him and he will need Sage Mode for her. In Sage Mode I can see him beating Alive Itachi, Kisame, Pain Arc Naruto, Gengetsu but will probably lose to High Kage with hax like Mu. People like Kabuto, Killer Bee, Edo Itachi are above his paygrade and would beat him.

That is it from today’s post on How Strong is Master Jiraiya Naruto? If you do not agree with the points in the post and have some of your own opinions, share them with us in the comments section down below. Keep visiting Animesoulking for more information about Anime and Manga.

Chandan is the writer of “How Strong is Master Jiraiya Naruto?”. Also, Connect with me on youtube and Facebook.