Home Naruto/Boruto How Strong are 6 Paths of Pain? | Naruto Shippuden 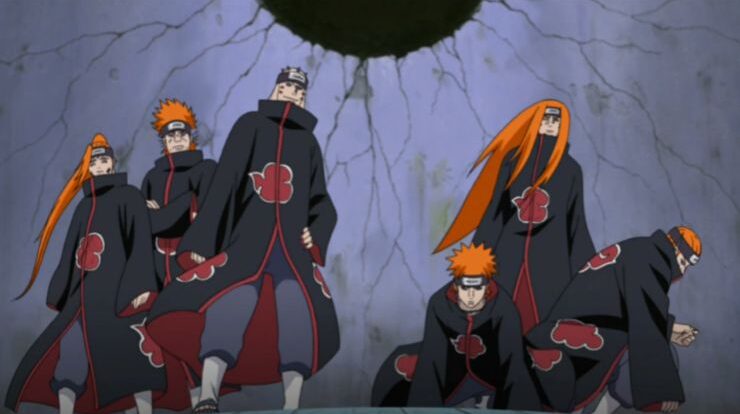 Nagato has each of the Six Paths Techniques of the Rinnegan spread out among the different Pain bodies; Deva Path for Shinra and Chibaku Tensei, Preta Path for Chakra and Ninjutsu absorption, Naraka Path for interrogation and restoration, Asura Path to create weapons for battle, Animal Path to summon different kinds of animals, Human Path for soul extraction. Each of these Pain bodies is capable of fully utilizing the Path assigned to them.

The Six Paths of Pain each have Rinnegan eyes a superior dojutsu to most in the series. For example Sasuke was able to broke out of Itachi’s Tsukuyomi because of his Sharingan, Itachi also talked about how only a Mangekyo Sharingan can avoid Mangekyo Sharingan Genjutsu. From these I will say to a certain extent, Rinnegan is immune to visual genjutsu and could also depend on the wielder. The Pain Paths are different bodies anyway and putting one under genjutsu doesn’t affect the others.

The Six Paths of Pain have what we call shared vision which allows them to see the movements of their foe. For example even if you attack one of the Pain’s from blindside, so long as another Pain body is seen you, the Pain you’re attacking is automatically seen what you’re doing as well and will react accordingly. Even Sage Mode Naruto with his incredible Taijutsu had to disrupt their shared vision to take them out or use an attack they couldn’t see “Frog Kumite”. This tells us that unless one is too fast for the Pain’s to react or disrupt their shared vision, they cannot be beaten in Taijutsu.

Each of the Six Paths of Pain are quite fast but the one whose speed was truly shown was “Deva Path”. Deva Path showed incredible speed and reactions enough to keep up with the immense speed of Naruto’s Six Tails Kyuubi Mode. This version of Naruto was so fast that he at times blitzed and overwhelmed Deva Path but Deva Path could still keep pace and react to many of its attempted blitz.

Majority of the Pain bodies when they first invaded Konoha showed some really good strength feats. Most of them were capable of lifting shinobi by their using a single hand which is impressive. The only time they got overwhelmed physically were against the Sages (Jiraiya and Naruto) and against Naruto’s Kyuubi forms. They could pretty much match and overpower many shinobi physically.

Nagato granted the Deva Path ability to Tendo. This gives Tendo the ability to execute Shinra Tensei capable of repelling all attacks away. Its power depends on the amount of chakra he puts in it. It is immensely powerful and comparable to the absolute defenses in the series, capable of destroying the entirety of the Hidden Leaf Village. In order to overcome it, a greater force must be applied and we don’t have too many things or people who can provides such. Preta Path also acts as a form of defense since it absorbs whatever attack that comes its way.

Through the Animal Path, Pain is able to summon a variety of creatures for battle ranging from Giant Multi-Headed Dogs which are immortal and continuously multiply themselves when hurt, to Giant Rhinos, Birds, Salamanders and other kinds of creatures. Some of these summons for example the Giant Multi-Headed Dogs are able to give even the most powerful of Boss Summons a hard time in battle.

The amount of chakra Pain has, depends on the amount Nagato feeds them. Nagato is a chakra monster and it would take a very long time for him to run out of chakra, this means he can keep the Pain bodies going in battle. As dead bodies they cannot also run out of stamina unless Nagato himself tires out. So the chakra and stamina of Pain totally depends on Nagato and since Nagato is a monster in both areas, Pain benefits from it.

We can see the balance that Pain has in all areas proving that they will be trouble for majority of characters in the series. Let’s continue to determine how strong he is.

What Tier are 6 Paths of Pain?

When all 6 Paths of Pain are working together they are a force to reckon with. Jiraiya with Sage Mode only managed to defeat 3 Pains without intel. Naruto with intel managed to defeat 5 Pains using Sage Mode but was unable to defeat Deva Path. The 6 and 8 Tailed Kyuubi versions were necessary to weaken Deva Path. Both Sage Mode Naruto and Jiraiya were High Kage level, but Pain was still too much. This tells us that Pain is at least a Tier Higher. I will not say Pain is in the same Tier as Nagato when healthy but they should be close so, “High Kage+” for the Six Paths of Pain.

While I think the 6 Paths of Pain together are in the High Kage+ Tier i.e. just below the Top Tier it really depends when it comes to battle. Because for me without knowledge even those in the same Tier; KCM Naruto, Kabuto, Edo Itachi, 3rd Raikage and the rest in the same tier would not be able to handle Pain. So without knowledge for the opponent I see Pain beating everyone in this same tier but with knowledge I see most in the same tier especially; Sage Mode Kabuto, MS Obito, 3rd Raikage, Killer Bee pulling a win. Under general circumstances I can only see MS Obito and the Top Tiers upwards being truly certain of winning against Pain.

That is it from today’s post on How Strong are 6 Paths of Pain? If you do not agree with the points in the post and have some of your own opinions, share them with us in the comments section down below. Keep visiting Animesoulking for more information about Anime and Manga.

Chandan is the writer of “How Strong are 6 Paths of Pain?”. Also, Connect with me on youtube and Facebook.