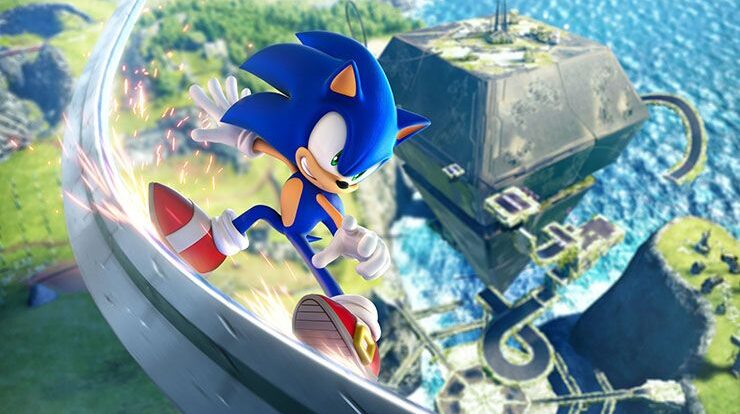 This includes new ways to play levels, different routes to explore environments, and, of course, new characters. These new additions to the cast made us wonder how they stack up in power to the returning faces in the franchise. Well, let’s go to the list.

We, nor even Sonic himself, seem to really know what Big is doing there in terms of the story. While Big’s fishing minigame, combined with what he can do with the tokens you give him after each catch, can be really helpful in minimizing the grinding needed for various things, that’s really the only thing Big is there for.

Big doesn’t really demonstrate any form of strength or power in this game. He literally stands in one spot, allows Sonic to use his spare fishing rod, and not much else. He may now be voiced by the guy who has voiced other powerful characters, like Gohan in Dragonball, but that doesn’t really count. He’s very helpful, but isn’t shown to be powerful, hence why he is at the bottom of the list.

If this were a list covering how powerful a character’s mind was, Eggman would be right near the top. However, since that isn’t what we are doing, Eggman remains here. In terms of Frontiers, Eggman doesn’t demonstrate much that exemplifies raw power. He is usually seen either in front of a computer or in his Eggmobile trying to figure out how to get out of cyberspace.

He even has created a new character, who we will talk about later, with the specific task of protecting him. Eggman does at least show that he can be more aggressive than Big ever really has been, which gives Eggman a leg up on him.

The prologue comic tied into the game’s story where Eggman was featured doesn’t really add much in terms of demonstrating power, but it still shows Eggman contributing even more to the story than Big has, which isn’t saying much.

Either way, within the context of this game, Eggman will be placed above Big. Unless some unknown DLC comes out that can help boost Big up in his power-based feats, he will stay at the bottom under Eggman.

This is where we start to get to characters actually showing some notable form of power. If we just looked at the game itself, Amy would probably be stuck right at the bottom as well. For the vast majority of the game, she is trapped in Cyber Space. After being freed from her prison, she can be seen by and talk to Sonic, but she can’t physically interact with anything. This limits what she is able to do to help.

This is where the tie-in comic, Sonic Frontiers Prologue: Convergence comes in. Within the first couple of panels, the first thing we see Amy doing is going up against some of Eggman’s robots on her own. She doesn’t appear to have any injuries whatsoever, implying she can hold her own for at least a little while.

One panel even shows her using her hammer to knock back one of the giant robot arms, showing that she has more strength than she might let on. Just the fact that she is seen doing something to demonstrate power in some way puts her above the other two.

Tails is in a very similar boat as Amy. Both were trapped in cyber space for most of the game, both could contribute very little in the real world, and both get some redeeming moments of power in the tie-in Prologue comic. You would think that Amy would be placed higher than Tails in this regard. In this comic, Amy does a lot more of the fighting, whereas Tails begins by disassembling part of the robot.

However, Tails has one image in the comic in his favor that puts him above Amy. As they are attacking the giant robot’s legs, Amy uses her hammer to dent one of them, while Tails uses his…well…tails to slice a leg in half!!!

Amy uses her hammer for most of her striking power, where as Tails apparently doesn’t need a weapon to pull off even more insane feats. It’s for this one moment that we feel comfortable with placing Tails just above Amy for this particular list.

Knuckles is already well-known to be the muscle of the group, and he certainly has his chance to show that off a little bit here. Unfortunately, he does not get as much of a chance as we would have liked, as he ends up enduring a similar fate to that of Tails and Amy. It also doesn’t help that Knuckles was not featured in the prologue comic we have been talking about.

However, there was actually a full-on, animated short called Sonic Frontiers Prologue: Divergence that stars the red echidna. In that animation, Knuckles is exploring more of Angel Island, when we comes across one of those mysterious portals that can be found on Starfall Islands. Upon inspecting it, as well as being brought through the portal, Knuckles gets ambushed by a group of Soldier robots.

He actually fights off a group of them one right after another. As for the rest, he punches the ground, and a huge chunk of the cliff collapses under the soldiers. Knuckles takes care of the last one that tried to survive, and the battle ends.

Knuckles then gets attacked by Sage and one of the Asura Guardians, where he quickly gets imprisoned. All of the feats he pulls off in this video greatly demonstrates some of the raw power he possesses, easily putting him above everybody we have seen so far.

Being the main protagonist, you would probably think Sonic has noteworthy moments of power, and you would be right! Sonic is able to use his incredible speed to not only traverse the islands in relatively short amounts of time, but for his incredible new combat skills. Sonic has a skill tree in this game that gives him an increasingly wide variety of moves.

Combining these together, he is able to take down most general enemies relatively quickly. He also gets some points for his ability to resist the cyber energy for as long as he did. While his body did eventually cave into it, he still resisted its effects for a long time. Such examples of this can be found when he is disabling the giant towers on Rhea Island.

Each time he shuts one down, the cyber energy is effecting him more and more. Even though he is going through visible pain, he presses on until his body ultimately gives out. Sonic is also able to take out any of the guardians in a short amount of time, especially as he levels up. This is why we put him above Knuckles.

Knuckles was attacked by an Asura Guardian, and it cuts to him having been captured soon after. While we don’t know for sure if this means he lost to the Guardian or if Sage captured him before an actual fight, one thing is for sure: We haven’t seen Knuckles beat Guardians of that size in this game’s story, but Sonic is shown to certainly be able to.

If you haven’t played Sonic Frontiers yet, you would probably believe Sage was the main antagonist. This is actually not the case. It turns out that Sage was antagonizing and attacking Sonic through a good chunk of the game because she thought he was intentionally acting as a threat to the islands.

She controls many of the Guardian robots on the islands, as well as prompt most of the Titans, as a means to go up against Sonic. This is the biggest reason why we are putting Sage above Sonic on the list for now. Sonic is unable to defeat these Titans without the power of the Chaos Emeralds, but Sage is able to manipulate them with her raw abilities with seemingly little effort.

Not only this, but in the final act of the game, Sage was able to completely control the final Titan, which goes by the name Supreme. Sonic also needed the Chaos Emeralds to defeat it initially when it was possessed by the game’s real villain. If Sonic and Sage were to go toe-to-toe without any outside help, perhaps Sonic could pull off a win.

We could still see and understand some arguments being made to say that Sonic is stronger, but for now, until we see more of Sage in the future (which seems like a very distinct possibility with the game’s final cutscene), we are going to put her higher.

We now have reached the character that we believe is the most powerful in the game, and they are simply referred to as The End. While we aren’t entirely certain at this point who or even what The End actually is, we can say for certain that this character is an incredibly powerful one whose goal seems to simply be to destroy everyone and everything.

This character has gone on record within this game to have previously destroyed entire races of creatures, stars, and even planets. Think of The End, especially when it takes on its Moon form, as being like the Death Star from Star Wars if it was sentient! Upon being freed from Cyber Space, The End quickly takes control of Supreme, the final Titan in the game.

It was only when Sonic took on his Super form that he was able to beat The End in this state. However, this climactic fight was not over. The battle was then taken to space, where The End took on the form of a giant moon. Whether you get the full experience of the battle by playing on Hard Mode or not, one thing is clear.

It ultimately took the combined might of Super Sonic and Sage, who was controlling the Supreme Titan, to defeat The End in…well…”the end”. If Sonic and Sage tried to fight this character without Chaos Emeralds or Titans, we don’t think they would last very long. It’s with this, along with how they are able to destroy many planets, that we believe The End easily is the most powerful character.

That is it from today’s post on Top 8 Strongest Sonic Frontiers Characters. If you do not agree with the points in the post and have some of your own opinions, share them with us in the comments section down below. Keep visiting Animesoulking for more information about Anime and Manga.

Chandan is the writer of “Top 8 Strongest Sonic Frontiers Characters”. Also, Connect with me on YouTube and Facebook.