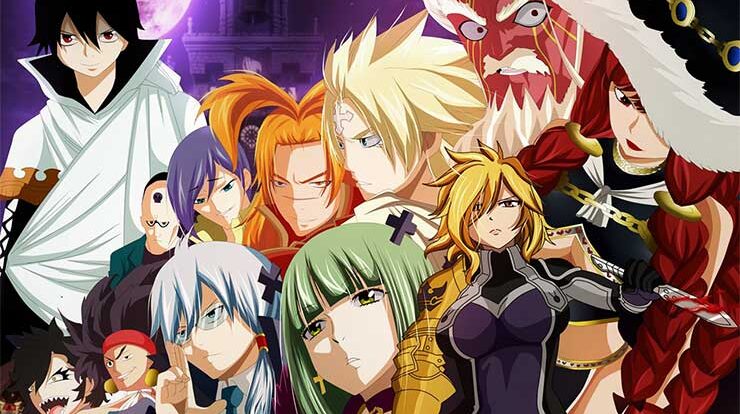 Neinhart is the weakest member of the group. Neinhart signature magic is Historia of the Dead, which allows him to look into the hearts of others and seed out their historia, giving him the ability to manipulate them against their will.

Ajeel is known as the “Desert King” due to his ability to control huge landmasses of sand at will to create sand storms, golem, tsunamis etc. He did pretty well against erza during their battle, completely overpowering her throughout the fight.

Jacob is master in the art of assassination and he uses stealth and transportation magic to camouflage his presence and teleport his targets into an alternative dimension respectively. He is the Master of Hand-to Hand Combatant as he was able to go toe-to-toe with Natsu.

Brandish is known as the “Country Demolisher” because she uses a pretty intresting and advanced form of magic, which gives her the ability to manipulate mass. She can increase or decrease the size of anything or anyone including body parts. According to Gray, her amount of Magic Power is overwhelming even greater than makarov dreyar.

Bloodman possesses all the curses of the tartaros guild demons which he uses for battle. He’s also intangible to any attacks. He had the upper hand against gajeel during their battle. He was still capable of taking him on even after he had transformed into dragon force due to consuming the magical barrier particles.

Wall is an android with the ability to analyze and adapt alchemic automtions. He created mechanized weapons,which he could use to exploit his enemies weaknesses and shortcomings. He gives a decent fight against laxus.

Invel is known as the “Winter Genral” due to his ability to use ice magic at such a high level. He’s able to freeze anything instantly including other types of magic. During his fight with gray,he completely overpowered gray until gray used ice devil slaying magic in order to defeat him.

Dimaria earned the title “Warrior Queen” within the alvarzec empire after conquering several battlefields. She has the ability to control time. This power was given to her by the god of time “Chronos” which she could transform into. She even overpowered kagura, wendy, shelia at the same time.

God Serena has 8 different dragon lacrimas implanted into him giving him the ability to use 8 different kinds of dragon slaying magic. He also defeated Four Gods of Ishgar easily. Before becoming a spriggan 12 member, he was a member of the Ten Wizard Saints and the strongest Mage on the entire continent.

Larcade was initially thought to be zeref’s son but was later revealed to be a demon created by zeref. His magic revolves around 3 human desires Hunger, Famished Soul and Famished Soul, R.I.P which he uses to incapacitate his opponents. This magic was initially said to be capable of defeating acnologia.

Irene is the creator and first user of dragon slayer magic.she got her power from a dragon called “Belserion”. She is also known as high enchanter because she can bestow her power on all things including the atmosphere and the very earth itself. She can also transform into dragon which is stronger than her human form.

August has been revealed to be the son of zeref and he is known as the magic king due to his ability to copy any kind of caster magic. He is said to have mastered countless types of magic and considered the strongest among the spriggan 12. He is even capable of destroying entire country at least the size of Fiore with ars magia.

That is it from today’s post on Top Strongest Spriggan 12 Members. If you do not agree with the points in the post and have some of your own opinions, share them with us in the comments section down below. Keep visiting Animesoulking for more information about Anime and Manga.

Chandan is the writer of “Top Strongest Spriggan 12 Members”. Also, Connect with me on youtube.