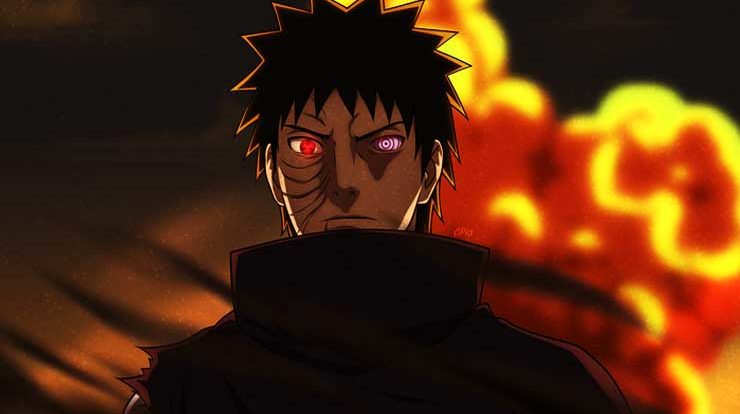 Tajima existed during the war-torn era before the creation of the hidden villages. He wielded the sharingan and it was enough for him to hold his own against his rival batsuma senju. He was a skilled swordsman. The fact he was able to survive up until adulthood during an era when many young children died in wars suggested he was a very gifted shinobi.

Kagami was one of the few uchiha who never fell victim to the clan’s curse of hatred. He was powerful enough to receive praise from shisui and danzo, with the former admitting their inferiority to him at the time. He never managed to awaken the mangekyo sharingan but his visual powers allowed him to save danzo’s life many times. He participated in the third great ninja war.

Naori was a kunoichi from the hidden leaf’s uchiha clan. She was undoubtedly a very powerful kunoichi who was able to awaken the Sharingan and the Mangekyo Sharingan. She was shown wielding a sword, indicating skill with Kenjutsi and was also able to use the izanami which traps the target in an endlessly looped genjutsu.

Fugaku is the father of itachi and sasuke. In his time he was powerful and wise enough to be made leader of the uchiha clan and konoha military police force. He managed to awaken the Mangekyo Sharingan and while its abilities are unknown, the fact that he was chosen as a candidate for fourth hokage alongside minato and orochimaru must mean he was indeed powerful.

In his time, Izuna alongside madara were considered the strongest uchiha and they managed to awaken the Mangekyo Sharingan. Just like madara, we don’t really know the abilities izuna’s Mangekyo but he was considered madara’s equal that’s until madara obtained Eternal Mangekyo Sharingan. His skills allowed him to fight on equal ground with tobirama senju who was renowned as the fastest shinobi of his time.

Due to his immense talent, Shisui was promoted to jounin at a young age and made leader of his squad. His Mangekyo Sharingan which he also attained at a young age allowed him to use one of the most powerful known genjutsu “Kotoamatsukami”. He could also use the body flicker technique unlike any other and combined with his other abilities he was feared in his time.

A prodigy, who did the unthinkable for the sake of his village. Itachi’s Mangekyo Sharingan gave him access to so many unique abilities like a lethal genjutsu “Tsukuyomi”, Eternal black flames “Amaterasu”, Susanoo imbued with spirit weapons “Totsuka Blade and Yata Mirror”. These abilities combined with his quick thinking, he could defeat foes that were actually stronger than himself.

For me, Obito’s Mangekyo Sharigan is the most powerful among the uchiha due to kamui. Throughout the series, he had only one one mangekyo Sharingan eye and the other was with kakashi but he was still among the strongest shinobi. He continued to acquire more power like Rinnegan and eventually became ten tails jinchuriki. This allowed him to take on the entire shinobi alliance by himself. He was only beaten because of his memories which affected his concentration in battle.

Sasuke had a steady progress throughout the series and with each power gained he surpassed most of his predecessors one after the other. He surpassed itachi after mastering the Eternal Mangekyo Sharingan in the war arc, he surpassed obito after awakening the Rinnegan. The Rinnegan allowed him to battle against foes like madara, kaguya and force a draw against naruto. There’s one person I think he’s yet to surpass though and that person is madara.

Madara was the first uchiha to awaken the Mangekyo Sharingan, Eternal Mangekyo Sharingan and Rinnegan. He fought against hashirama several times and although he always lost, he was in the same tier of power as the latter. He also became the ten tails jinchuriki and it took both naruto and sasuke together to battle against him. Sasuke is getting there but i don’t think he’s surpassed madara yet.

That is it from today’s post on Top 10 Strongest Uchiha Clan Members. If you do not agree with the points in the post and have some of your own opinions, share them with us in the comments section down below. Keep visiting Animesoulking for more information about Anime and Manga.

Chandan is the writer of “Top 10 Strongest Uchiha Clan Members”. Also, Connect with me on youtube.