Home Naruto/Boruto How Strong is Naruto Hanzo of The Salamander? 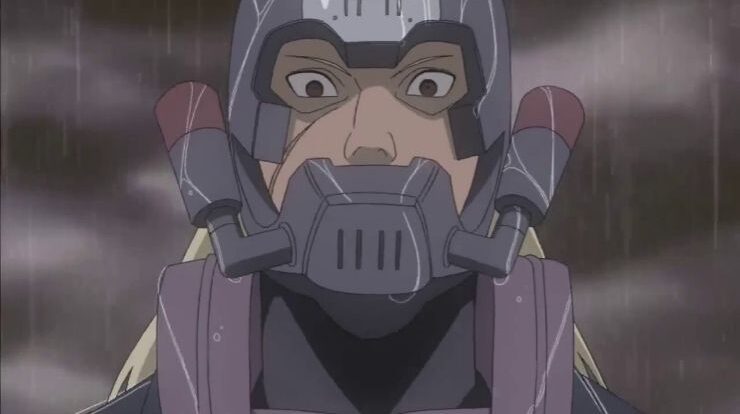 Hanzo was able to use fire release with high proficiency. Combining it with explosive tags, he created devastating explosions as seen during his attempt to kill Nagato. He could also use the summoning technique to summon a massive salamander known as Ibuse to complement his abilities.

Hanzo didn’t seem to possess any kind of skill in Genjutsu for all times we got to see him. We also never saw Genjutsu being used on him thus unable to determine the level at which he is immune to it.

Hanzo possessed great skill in closed quarters combat especially in his prime. Wielding a weapon “Kusarigama” he was able to match and even surpass various dangerous opponents one of which was Mifune whom despite not outrightly being a ninja was one of the best Kenjutsu Users in the series and it shouldn’t be surprising since he’s trained at it his entire life. However Hanzo still managed to outdo him in closed quarters. The weapon’s blade was coated in Hanzo’s deadly poison, making a single blow enough to successfully dispatch enemies.

Hanzo was an incredibly fast shinobi, with speed in water said to be unrivalled by any. His speed was such that he could use the body flicker technique as we saw in his battle against Nagato and friends. Using said technique he was the only person who to escape Nagato’s soul ripping technique that vanquished countless Ame and Konoha shinobi.

The only way to gauge Hanzo’s physical strength is from the use of his weapon. It was quite long with a chain attacked to it but Hanzo still could wield it with great skill and swing it around with ease as though it were a normal blade. To be able to do this, he must possess considerable physical strength.

Hanzo wasn’t just powerful but he seemed to be quite intelligent as well. Not that we saw any noteworthy intelligence feats from him, but he was the leader of Amegakure and being a leader isn’t just about power. He seemed to be a great one taking control of the Second Great Ninja War.

Hanzo didn’t really possess an orthodox form of defense, but he could still rely on his body flicker technique, which is only passive but a very reliable defensive methods which he could use to escape attacks as seen against Nagato’s technique or, use Ibuse his summon to shield himself from danger.

Hanzo could use the Summoning Technique, and living up to his salamander theme, could summon a massive salamander; Ibuse. A poisonous salamander and thus capable, if given the right amount of time, could store inside its body a large amount of poisonous gas, which can be subsequently exhaled from its mouth at Hanzo’s command. This poison is strong enough to almost completely paralyse opponents just mere seconds after inhalation, leaving them entirely at its master’s mercy.

Hanzo possessed the necessary chakra and stamina to take part in the Second Great Ninja War, use his summoning, fight many battles some of which included; single handedly defeating an entire Konoha Shinobi Squad, battle the trio of (Jiraiya, Orochimaru, Tsunade) and completely drain them of chakra and stamina while he himself appeared as though he could still go on fighting.

As we can see, most stats highly favour Hanzo indicating that he was indeed powerful. Let’s continue to determine how strong he really was in his time.

This is the tricky one and one of the main reasons why it is difficult to tell how strong Hanzo really was compared to the others. First, we know that he was the main focus of the Second Great Ninja War easily defeating his enemies. His main feat was that he defeated (Jiraiya, Orochimaru, Tsunade) and from the way it was shown, it wasn’t that difficult for him to accomplish. However, the Sannin were not really in their prime and assuming they had already used their summons over the course of the war and thus couldn’t continue with them against Hanzo, because to defeat three boss summons using just one effortlessly is quite off. Still Jiraiya (much more powerful now) was quite shocked when he heard Pain defeated Hanzo. So, it could still be that he was just so much more powerful than them in his time making summons not very relevant. By portrayal (Jiraiya’s statements and the flashback with Pain) there’s only one tier for Hanzo and anything lower just wouldn’t fit; “High Kage”.

Pain himself said Hanzo lost because of his conviction and the fact that he stopped trying to improve and became rusty. Still I doubt he could have been able to defeat Pain. But we need to look at his abilities, poison from Ibuse that would pretty much paralyze his opponents once they get to inhale it and if manages to inflict any kind of scratch on his opponent they are done for if they have no antidode. I think he should be able to take the Mid-Kages in the series and the Sannins in their base. On the other hand the Sannin at their strongest should now be capable of handling him individually unlike at first.

That is it from today’s post on How Strong is Naruto Hanzo of The Salamander?. If you do not agree with the points in the post and have some of your own opinions, share them with us in the comments section down below. Keep visiting Animesoulking for more information about Anime and Manga.

Chandan is the writer of “How Strong is Naruto Hanzo of The Salamander?”. Also, Connect with me on youtube and Facebook.