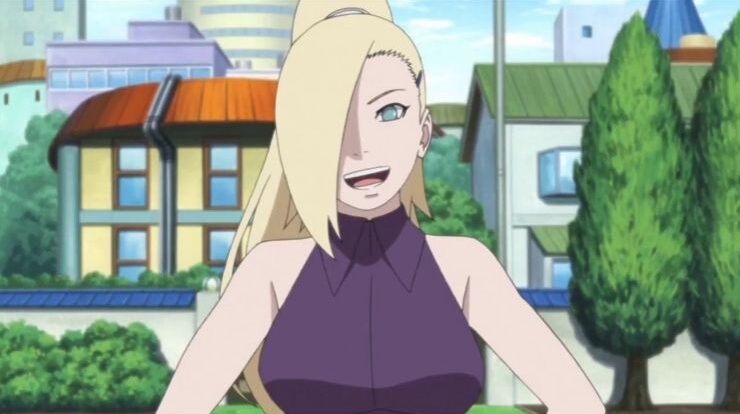 Rin was a shinobi from Konoha and a member of Team Minato which included; Kakashi and Obito. She was skilled in Medical Ninjutsu thus chosen as the main support for her teammates. Her aptitude in Medical Ninjutsu was such that she was able to teach first aid to her teammates. She was able to successfully implant Obito’s Sharingan into Kakashi’s damaged eye socket and despite the dire situation, she completed the procedure with speed and efficiency while only using basic medical tools. It is quite impressive considering her young age.

During the timeskip Ino learned Medical Ninjutsu and possessed great skill in it. She could heal fatal wounds, tell how severe an attack is by only observing it, and could aid in surgeries. She also learned to create poisons of her own that even other poison users have difficulty countering with antidotes, which she uses to coat her weapons. Not much however is known about her medical prowess now in Boruto since she mostly concentrates on what she’s best at; leading the Konoha Barrier Team.

Shizune trained under Tsunade so her skills in Medical Ninjutsu are immense. Her refined chakra control allowed her to perform even the most complex Medical Ninjutsu, such as leading a team to regenerate a person’s injured body with new cells. She is able to create poison and can incorporate it into her attacks such as emitting it from her mouth which is fatal even if only a whiff of it is inhaled. She however didn’t succeed in reaching her master’s level but she’s still a vital part of the Medical Team in Boruto.

Chiyo was a highly capable Medical-Nin, and while having some healing skills, she mainly used her medical knowledge as a poison expert, which allowed her to create powerful poisons that in her entire life have only been countered by Tsunade. In her many fights with Hanzo, she was able to successfully create an antidote which will allow her to counter the latter’s poisonous gas. She also created a life giving technique, one that would result in her own death if it were used, that she wanted to use for Sasori in order to give life to his puppet parents. She however ended up using it to revive Gaara.

According to Madara, Hashirama could use Medical Ninjutsu, capable of healing himself without any hand seals. I however think his immense healing ability although could’ve been partly due to his medical skills was mainly due to his special cells. We know nothing about Hashirama’s ability in healing other people but again, after Madara saw Tsunade’s skills; healing her teammates, he still stated that her medical skills pales in comparison to Hashirama’s. It was only after Tsunade activated Byakugou and healed from his Susanoo stab that he took back his words. This somehow indicates that Hashirama was quite skilled in Medical Ninjutsu.

From a young age, Kabuto already displayed a natural talent for Medical Ninjutsu capable of healing injuries without difficulty. His medical skills was such that he invented; Yin Healing Wound Destruction as a way of keeping test subjects alive longer by preemptively healing damage they receive and could also use it on himself whenever he expects to be badly injured. He could use chakra scalpels for other purposes other than surgically to either cut through defenses or augment his physical strikes, severing muscles on contact in order to disable opponents. For other people, he could create drugs to various effects, either as pain killers, hormones to enhance physical attributes, poisons to specifically neutralise a particular target’s abilities or immunities, and truth serums to aid in interrogations.

Due to her refined chakra control, Sakura was fit for Medical Ninjutsu, so she mastered the art under Tsunade. Her skills was such that she could heal even the most fatal of injuries and create antidotes for even the most deadly of poison as seen when she created one for Kankuro and some for herself and Chiyo to counter Sasori’s poison during their battle. By the war arc she had mastered Tsunade’s ultimate healing jutsu; Creation Rebirth: 100 Healings which allows her to regenerate from any damage done even from being stabbed by Madara’s Truth Seeking Orbs. By summoning Katsuyu and using her chakra, she could heal thousands of shinobi from the shinobi alliance who had been injured in the war. She’s currently the best Medical Ninja in Boruto and leads the medical team with Tsunade having retired.

Tsunade’s prowess in Medical Ninjutsu was such that, she was able to identify ailments at a glance and treat conditions that other Medical Nin deem impossible to cure. Her skills were enough that Orochimaru believed she could reverse the necrosis like effects of the Dead Demon Consuming Seal. She was able to fix Lee’s damaged spine and counteract the effects of the Three Coloured Pills. She’s the one who invented the Creation Rebirth Technique, the pinnacle of Medical Ninjutsu which allows her to heal any damage done to her no matter how severe. She can also heal thousands of shinobi by summoning Katsuyu and using her chakra as seen in the Pain and War Arc. She also found a way to continuously look young despite her old age. Sakura has surpassed her in strength, but I believe Sakura is yet to in Medical Ninjutsu.

That is it from today’s post on Top 8 Best Naruto Medical Ninjutsu Users. If you do not agree with the points in the post and have some of your own opinions, share them with us in the comments section down below. Keep visiting Animesoulking for more information about Anime and Manga.

Chandan is the writer of “Top 8 Best Naruto Medical Ninjutsu Users”. Also, Connect with me on youtube and Facebook.