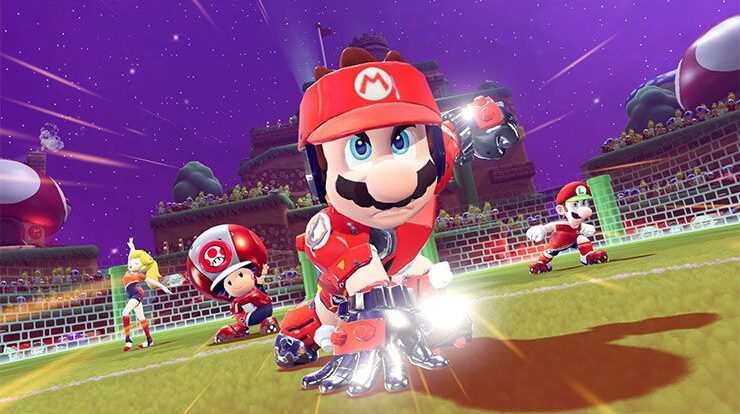 When it comes to sports games, it can be hard to escape the monumental series known as Madden. There is a reason for this, as the game allows you to play one of the most popular sports without the drawbacks, the game lets you explore the various aspect of the NFL world either by yourself or with friends depending on your chosen game mode.

From the story of the draft day pick of a rookie and taking them to be a champion and living out your NFL dream. You can also act like a coach or team owner and plan out everything from your team to the season’s strategies. And to answer your question, yes, the game does have its fair share of hilarious glitches.

But you don’t play this game for perfection. You do it to full-body tackle your friend without getting off of the couch.

If you are looking for an action-orientated sports tale, then knock out city offers a different and unique way of playing. The game at its heart is dodge ball, but then go on and remove any sense of rules while adding superpowers, and that is Knockout City in a nutshell.

The game boasts a variety of game modes for you to choose from, ranging from 3v3 matches to a free for all game mode where up to 8 players can fight each other to see who is superior. These all contribute to your reputation and standing as well as unlocking crew rewards for you to use later.

One of the most fun things about knock city is the ability to use special balls that give super powers like messing with gravity for caging players for a set amount of time. The other nice feature of this game is that you can customize your character to give them a unique flare.

Hey, do you like soccer? Do you think that you should be allowed to tackle like you are playing American football and throw more random things than Moon Knight? The super Mario Strikers: Battle League is the game for you. The game is the latest in the Super Strikers lineup and has all of the fun you would expect from a Mario sports game and a Mario kart game in one.

You can play five-on-five matches in either single or multiplayer. The game lets you use a variety of items and movers from power-up moves and strikes that are based on your character. Or you can get ahold of items that grant enhanced abilities like growing in size or tripping your opponents.

You can even get special uniforms that will alter the stats of your characters if you can get ahold of all the pieces. Also, don’t forget one of the most important rules for strikers, tackling is not only an option but encouraged.

Baseball is often considered the American pass time, but with MLB, you can do much more than just pass the time. Whether you enjoy the idea of forging your own player career or are just here to play the game with your friends, this offers something for everyone.

When it comes to the career mode, which is called the road to the show, you will keep track of all your stats as you play and put them on your sheet. So much like with my school transcript, you get to see every way that I missed the mark.

But it can be fun to see those wins and losses that you yourself made. That game also allows for coop play with up to three players on a team, and you can play against either the a.i. or other players online. This can even be a cross-platform if you sign up for an account.

We have covered some close-to-reality games on this list, and while games like that can be fun, sometimes what you are looking for is a more arcade-style game. This is where Sunday rivals come in and reinvigorates an older style of gaming. Don’t be fooled by the indie nature of the game. It offers features and gameplay that will let you live out your football fantasies.

From season mode that will let you play a series of games to take home a trophy to the new head hunter mode that acts as an elimination tournament. Of course, there is also the degree of customization that the game offers is just outstanding. With options being given with everything from team uniform colors to the different types of turf in the stadium.

This can even be extended into the gameplay itself, as you will be able to choose five offense and defense strategies to give you the best chance at success.

Tennis is not an easy game by any means. While many sports can rely on power or speed alone, tennis requires tactics and techniques as well. This is going to affect any game that attempts to adapt the sport, but Tennis World Tour 2 does just that. The game attempts to recreate the actual motions used in tennis in order to accomplish this feeling.

In addition to this, the game features every type of four surfaces for you to play on that will affect your game. The last way the game allows you to mimic some of the tactics involved in tennis is the use of skill cards. This is great because I cant wait to use the tennis equivalent of the reverse Uno card.

What is the essence of sports is nothing more than compassion between friends, and nothing invokes completion more than the Olympics. If you agree with that, then you will probably enjoy Drink More Gulp because it is like all of that if aliens got it slightly wrong. This encounter of the third kind is based on the idea that aliens copy the Olympics but don’t understand it well, so everything is slightly off.

The gameplay is billed as a party game, so your character controls are simple and intentionally designed to be tricky to pick up. The good news is that you can use the single-player mode to practice a little, but the real fun is when you play with friends. The game itself can support up to twenty players at a time, making it great for parties and families.

The game also has a sponsored feature that will randomly add upgrades or hindrances to races or events you have already done to ensure a different experience each time.

Ah. Punch out. A classic game that helped launch the idea of sports games in addition to being one of the first games to make a player want to smash the screen. The fun and frustration factor of this game comes from the intuitive and strategy-based nature of the gameplay.

Punch out is a boxing game at its heart, and the original being released in the eighties in it was one of the first really popular sports games. So popular that you can often find ports of it to current consoles or emulations of it online and the latest remake in Punch-Out!!(Wii). It is easy to see why when your goal in the game is to beat all of the other boxers and become the champion.

The difficulty is that each boxer will have different abilities and weaknesses that you will have to learn and exploit to beat them. Some weak spots are so subtle that they can take multiple retries, and that is why this game is both addictive and frustrating for so many.

Barton Lynch certainly angles itself to ride the waves, and if that is a sport that you are interested in, then this is a game you should look at. The thing about barton Lynch is that it is singularly focused on surfing, and the game has been designed from the ground up with this in mind.

You not only design your own custom surfer, but you can also customize things like whether in the game to create the ideal conditions for the type of surfing that you want. In addition to these features, the game features a strong career mode where you can take your surfer from the grand up in the surfing world.

In addition to these ideas, the game also features real-world pros for you to compare yourself to or wipe out against. You can also visit real-world locals to find the beach and the surf that are right for you.

This next one hits a very different type of sport than some of the others that we covered because League Manager covers esports. Specifically, this game is about being the manager of your own esports team and taking them to the top.

This does bear similarities to playable modes in other games like Fifa, but here the main focus is the management aspect of the game. Choose their members and the strategies that your team will use, and then go about training them. The game is currently in early access, so more modes may be added as the game progresses.

That is it from today’s post on Top 10 Best Sports Games To Play Right Now. If you do not agree with the points in the post and have some of your own opinions, share them with us in the comments section down below. Keep visiting Animesoulking for more information about Anime and Manga.

Chandan is the writer of “Top 10 Best Sports Games To Play Right Now”. Also, Connect with me on YouTube and Facebook.