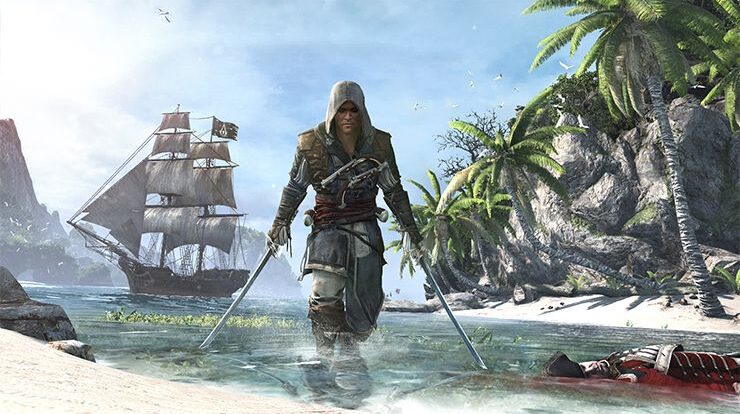 Starting at 10, the really dumb game of Blackwake, and it’s absolutely fabulous. You try to be a serious pirate but everything that can go wrong does go wrong. The humor is fantastic. For healing you drink tea in style with your pinky out.

This is a multiplayer Naval FPS game focused on teamwork. Fire cannons at sea monster, sink opposing team’s ships or board them for some sweet plunder and engage in fps combat. 54 players different kinds of ship with crews up to 13 players. You’ll have to maintain your ship, reload and resupply cannons. Don’t take this one too serious, you will have a great time.

GreedFall is a role-playing action adventure game in the style of The Witcher 3 and Dragon Age. You play as De Sardet, the hero of GreedFall sets out with his companions on an adventure to find a cure against the Malichor plague. The game is beautifully set on a remote magical island named Teer Fradee, which is full of all kinds of supernatural beings, three cities to explore and interesting natives to meet.

Combat is fluid and fast with an option to pause and queue abilities. The boss fights are quite challenging right from the start. A wide range of weapons and good customization options. With good cinematics and exciting visuals make this an enjoyable game.

Donkey Kong Country 2 is seen by many as one of the best 2D Platformers to ever exist. Players control Diddi Kong and his friend Dixie Kong who must rescue Donkey Kong after his kidnapped by King K Rool. The game is set on a pirate themed Crocodile Island with eight worlds of varying environments totaling 52 levels.

You get to collect bananas play as a parrot, jump, fly, climb and dodge to reach the challenging and complex bosses. This 16-bit game had mind-blowing Graphics in it’s day. Combined with one of the best soundtracks and great humor makes this an exceptional game.

7. LEGO Pirates of the Caribbean: The Video Game

This action adventure game is a true Delight. Had a stressful day? Go play this fun and humorous treasure. It follows the story of the movies with a whole lot of extra silliness.

You can play the wonderful main storyline or expand it with loads of side content of new characters to unlock and secret treasures to claim. The game is a mix of puzzle and platform challenges which are fun and have the right kind of difficulty and Exploration.

Sailing to success is Pillars of Eternity II: Deadfire. Players travel through Deadfire Island by ship where they’ll discover new races, visiting exotic islands and defend against pirates and choose their allies to counter powerful factions you encounter at nearly every port.

The God Eothas, once thought to be destroyed returnes to life in form of a Titanic statue nearly killing you as he destroys everything in his path. It’s up to you, the Watcher, to discover Eothas’ purpose and to decide to help or hinder his efforts.

In this great role-playing game you choose a class like warrior, magician, thief, explorer and many others. Spell casting is complex, character customization is very detailed and battling is very rewarding. The Deadfire world is huge with stunning graphics and heaps of atmosphere. Go enjoy this one.

Sea of thieves is an immersive open World sandbox game that will let you play out your ultimate pirate fantasy whatever that may be. The player assumes the role of a pirate who completes the voyages from different trading companies in a colorful and detailed world.

You have no set roles, you can sail ships, explore the world, fight many battles and hunt for burried treasure. Your ship is screwed by other players and that makes this game so special.

4. The Legend of Zelda: The Wind Waker

This game is set on a group of islands in the vast great sea. The player plays as Link as he attempts to save his sister from the sorcerer Ganon and becomes entangled in a struggle for the Triforce, a sacred Relic that grants wishes.

When this game came out many people hated the animated “kiddy” style but now many years later it has aged like fine wine and is even praised for it’s lovely cel-shaded visuals. A really well designed game with excellent combat, charming characters, fun Quests and a great inspiring story.

Cid Meiers is mostly known for Civilization type games but Sid Meier’s Pirates at number three is one of his most loved games and rightly so. The original game was released by Microprose in 1987 and was a huge hit. The Remake released by Firaxis in 2004, improved on the original in nearly every way and is a must-play for every fan of pirate games.

Sail the Caribbean, hunt for prey on the high seas or ally your ship and crew as a privateer in search of riches. You can choose your own path, face rough enemies, pursue fair maidens, plunder unsuspecting towns, avoid capture or dig for burried treasure.

2. The Secret of Monkey Island

At two is probably our favorite point-and-click adventure game ever. The Secret of Monkey Island is a true Delight. You play as a young and naive Guybrush Treepwood who wants to be a pirate. He sets out on the melee Island to find his fortune. On his journey falls in love with a beautiful governess who gets kidnapped by the ghost pirate Le Chuck.

So while trying to become a real pirate and to save his love of his life he is led to the most amazing and downright hilarious Adventure of his life. Great visuals and magnificent story, many funny moments and lots of lots of monkeys make this a must play.

There can only be one. The best pirate game ever is of course Assassin’s Creed IV: Black Flag. This is a well-crafted game. It combines the best open world action and adventure genres into one beautiful creation.

After shipwrecking on an island Edward Kenway kills a rogue assassin and takes on his identity for a Templar meeting in Havana. Edward unravals a conspiracy between high-ranking Templars working within the British and Spanish Empires who are looking for the Observatory, a device which can monitor anyone in the world. You travel the seas and lands of the Caribbean with your ship and crew.

The quests are varried, the combat is entertaining and the story keeps you invested until the end. Stunning Graphics combined with the high level Assassin’s Creed audio takes this awesome game to new heights. As a bonus you get to sing along with some great sea shanties!

That is it from today’s post on Top 10 Best Pirate Games of All Time. If you do not agree with the points in the post and have some of your own opinions, share them with us in the comments section down below. Keep visiting Animesoulking for more information about Anime and Manga.

Chandan is the writer of “Top 10 Best Pirate Games of All Time”. Also, Connect with me on YouTube and Facebook.