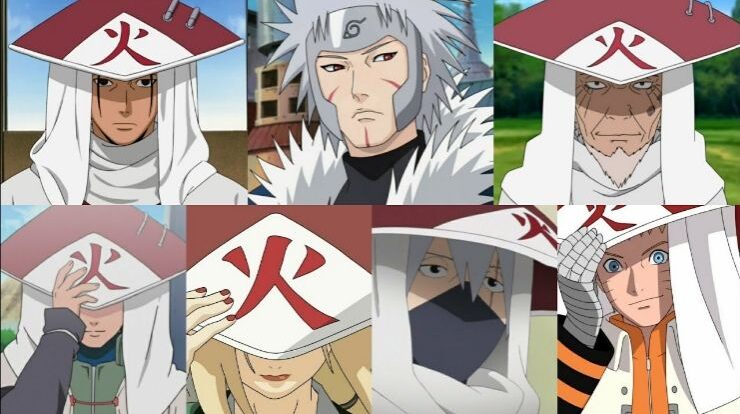 There should be no doubt that Kakashi became much stronger during the timeskip. Back in part one he was still just Jounin Level but the things he pulled off at the start of part 2, his part one version will not be able to replicate.

Naruto seeing that he hadn’t improved all that much during the timeskip Naruto managed to create his own jutsu ” Rasenshuriken” under Kakashi’s tutelage. He was much stronger at this point, not just because of the jutsu, but physically as well considering he went through a lot of physical training to develop the jutsu. He also managed to defeat Kakuzu, but with the help of course. Kakashi stated that Naruto surpassed him.

This is the version of Kakashi in Boruto. At this point he no longer has the Sharingan so he should be weaker than how he was back in the war. We haven’t seen him doing anything worthwhile in Boruto, but due to his experience and variety of techniques, he will still be able to beat a lot of Mid Kage Level characters, so Mid Kage.

Base Tsunade is still very powerful. Even without the seal, she could still make use of the chakra enhanced strength, is still quite fast and can still use her summon. Back in part one, during the sannin battle she used nothing but her base and summoning throughout, holding her own quite well, and only activated the seal towards the end. Even so, she was noted to be quite rusty. So, Base Tsunade with Katsuyu is at least Mid Kage.

The Mangekyo Sharingan version of Kakashi Hatake in the war showed great feats. He had no problems keeping up and battling alongside Gated Guy against V2 Jinchuriki. Battled on equal footing against Obito Uchiha in an intense hand to hand exchange. Not forgetting Kamui which although he could only use a few times was basically a oneshot technique if it manages to hit the target, so at least High Kage for War Arc Kakashi.

Despite his age Hiruzen was still one of the most powerful characters at that point in the series. He could take on Orochimaru and 2 reanimations at once. He managed to seal off Orochimaru’s powers but couldn’t completely defeat the latter because he just didn’t have the stamina to keep going. Regardless his feats clearly puts him at least in the High Kage Tier and he can mostly certainly compete with many in the same tier.

With her Byakugou Seal active, Tsunade’s physical parameters such as speed, strength are significantly enhanced. She also activates her immense healing ability which makes her almost immortal allowing her to take part in battle even as a medical nin. Against Edo Madara, while having to battle, she also continuously healed her teammates and boosted their jutsu using her chakra. She was only outdone by Onoki against Madara mainly due to his Jinton. High Kage at least.

Naruto became one of the strongest in Konoha upon mastering Sage Mode such that he was the main hope against Pain. Sage Mode increases all his physical parameters tremendously and he managed to take out 5 Pain bodies. Only Deva was too much for him with Sage Mode only so he had to use the Kyuubi forms. In the war his mastery over nature energy was much better getting even crazier feats like defeating the 3rd Raikage using a clone. Easily High Kage.

Old Hiruzen had the stamina issues. Edo Hiruzen doesn’t so this version of Hiruzen is closer to his prime than his old version. This version of Hiruzen was able to slice off the branches of the Shinju Tree using Enma to save Naruto when others couldn’t. He can make more clones unlike his old alive self and they were crucial when he countered the 5 elemental nature attack of the Buddha with his own using 4 clones and his main body. So, I think being above the High Kage Tier is fair.

Tobirama has only one form in this list mainly because I don’t think there’s a massive difference in tiers between his Edo and alive self. As an Edo even if he wasn’t at full power he was very close to it and I don’t think he would’ve done any better than he did in the war if he was alive. And of course he’s above the standard High Kage Tier possessing devastating techniques like; Flying Raijin, Edo Tensei, Mutually Multiplying Explosive Tags etc.

Like the others in this tier, putting Minato in the High Kage Tier is fair considering the feats he displayed when he was Hokage. He defeated Tobi but the difficult one was Kurama; Teleporting its Bijuudama, restraining it using Gamabunta teleporting it away and finally using help from Kushina’s Chakra Chains managed to seal Kurama at the cause of his own life. He gave up his life but it is by no means an easy feat.

After defeating Yang Kurama, Naruto gained control over his chakra, obtaining Kyuubi Chakra Mode. It enhances his physical parameters even more than Sage Mode does; makes him much faster and durable. He could spam Rasengans and Rasenshurikens easily and he could make KCM clones and some were capable of taking on Kage Level Shinobi. He could still use this form even after gaining Kurama’s cooperation and managed to survive the 10 tails cataclysm. This form should be a tier higher than Sage Mode.

In this tier characters become devastatingly more powerful than the previous tiers. In this tier is Bijuu Mode Naruto now with full control over Kurama. He can manifest an avatar resembling Kurama and he manhandled 5 tailed beasts and stalemated their combined Bijuudama with his. Only the Legendary Tier characters can defeat this version of him.

As a reanimation, Minato could make use of Kurama’s chakra thus much stronger than his alive version. Like Naruto, he could also make use of Kurama Avatar, Bijuu Bombs but he’s even better than Naruto’s Bijuu Mode because he also has Flying Raijin for greater versatility. He fought alongside Bijuu Mode Naruto and later alongside Bijuu Sage Mode Naruto against 10 Tails Jinchuriki Obito.

Naruto could stack Sage Mode on top of Bijuu Mode to become more powerful. We don’t know the multiplier but it enhanced all his physical parameters enough to go against Juubito. All his techniques in Bijuu Mode were senjutsu enhanced and thus could actually damage Obito. He should be at least a tier higher than his standard Bijuu Mode.

Hashirama is only once in this list because whether in Base or Sage Mode he’s still Legendary Tier and still stronger than Bijuu Sage Mode Naruto and Bijuu Mode Minato. He has wood release which supress Bijuu so yeah even in base he can still use almost all his wood release techniques. He only can’t use the Sage Arts which are only 2; Deity Gates and Shinsuusenju.

Kakashi borrowed Obito’s eyes for a while with some of the Rikudo Chakra he still had. Kakashi became strong enough to battle alongside Six Paths Naruto and Sasuke against Kaguya. He awakened the Six Paths Perfect Susanoo, could use Kamui Shurikens and Kamui Raikiri all of which played a part in the defeat of Kaguya. For that short duration it is difficult to deny Kakashi was God Tier.

That is it from today’s post on Naruto Hokage All Forms Tier List. If you do not agree with the points in the post and have some of your own opinions, share them with us in the comments section down below. Keep visiting Animesoulking for more information about Anime and Manga.