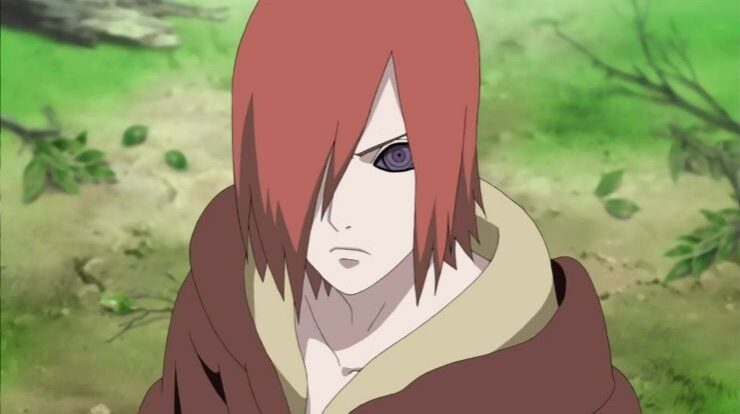 As a bearer of the Rinnegan Nagato has access to a variety of Ninjutsu Techniques. So, far he’s being the only one shown to use all Six Paths Techniques of the Rinnegan; perfectly as though the eye were his. He was also capable of distributing said abilities to different Pain Bodies, granting one path to each body. He could also use all 5 Basic Nature Transformations.

Nagato can’t really perform genjutsu, but as one who possesses a dojutsu superior to a majority of dojutsu in the series, he should be immune to visual genjutsu. He will still be vulnerable to non visual genjutsu though, for example those which are sound based.

Nagato has been crippled for a majority of his life, this makes it difficult to tell how good he can be at Taijutsu. He still has his hands though and no matter how good you are, engaging him is very dangerous. He possesses incredible reactions as seen against Naruto and Killer Bee and he handed them with ease when they engaged him. He always has the Asura Path and other techniques like Shinra Tensei to handle Taijutsu users.

Nagato can’t move so movement speed cannot be measured. Speed however isn’t all about moving from one distance to another, there are several other factors like; reaction speeds, which is very crucial in battle. Nagato makes up for his immobility by his incredible reaction speed. He had no trouble handled the speeds of KCM Naruto and Killer Bee and we know how fast those two were. This shows that we can’t only consider travel speed.

Nagato’s physical strength can’t really be measured. There are not feats, but like most powerful shinobi it should be above average which is nothing to really be concerned about.

Nagato is quite intelligent, at least enough to know that he can distribute the Rinnegan abilities to different Pain Bodies using his chakra to keep them alive and capable of controlling said bodies in battle in perfect sync. He could lead a country and a secret organization with only few people knowing his identity. He is not as intelligent as the top dogs in the series, but being so powerful, he doesn’t actually need to be.

Using the animal path of the Rinnegan, various animals and creatures to aid it in battle. These creatures appear to be immortal, as they were killed and later summoned again. Some of these animals are able to give trouble to the Boss Summons in Naruto especially Giant Multi-Headed Dog, which continues to multiply itself in battle.

While having numerous Ninjutsu Techniques for offense, Nagato like all Rinnegan users have a perfect defense known as Shinra Tensei, which creates a repulsive force capable of pushing away everything in the vicinity. This repulsive force is most commonly created around the user as a defense, repelling nearby opponents or incoming ninjutsu. The more chakra used, the stronger it is, so it is one of the best defense in the series.

Being a descendant of the Uzumaki Clan, it’s no surprise Nagato’s reserves are so huge. Excluding Six Paths Chakra only 2 or 3 shinobi should have more chakra than him. His chakra reserves were enough for him to distribute them among 6 different Pain Bodies with each one performing chakra taxing techniques (the various paths). He used a huge amount to perform Shinra Tensei which destroyed Konoha, battled Sage Mode, 6 and 8 Tailed Version of Naruto, perform a massive Chibaku Tensei, yet still had chakra to revive the dead shinobi of Konoha.

Uzumaki’s also possess high stamina, which is due to their life force and this makes them very resilient. Nagato possessed the necessary stamina to easily handle 2 Rinnegan from a young age. Even Obito who had Hashirama’s cells had difficulty handling Jutsu. Upon being attached to the Gedo Mazo, Nagato transferred his chakra to the statue and in doing so, manipulate it for years and stayed alive. A majority will die from this.

Based on Nagato’s stat rating, he’s up there among the strongest characters in the series. Let’s continue to determine how strong he is.

What Tier is Nagato Uzumaki?

Very few Non God Tiers can defeat Nagato. The absolute strongest person he can beat is Bijuu Mode Naruto. Preta Path, Chibaku and Shinra Tensei can help him get a few wins (about 2) out of 10 rounds against that version of Naruto. The absolute weakest who can beat him is One Mangekyo Sharingan Obito. Nagato is super powerful but Obito had Kamui hax and he can phase through most of Nagato’s attacks. Nagato is very reflexive though, One Mangekyo Sharingan Obito should only pull of a few wins out of 10 rounds against him.

That is it from today’s post on How Strong is Nagato Uzumaki? If you do not agree with the points in the post and have some of your own opinions, share them with us in the comments section down below. Keep visiting Animesoulking for more information about Anime and Manga.

Chandan is the writer of “How Strong is Nagato Uzumaki?” Also, Connect with me on youtube and Facebook.