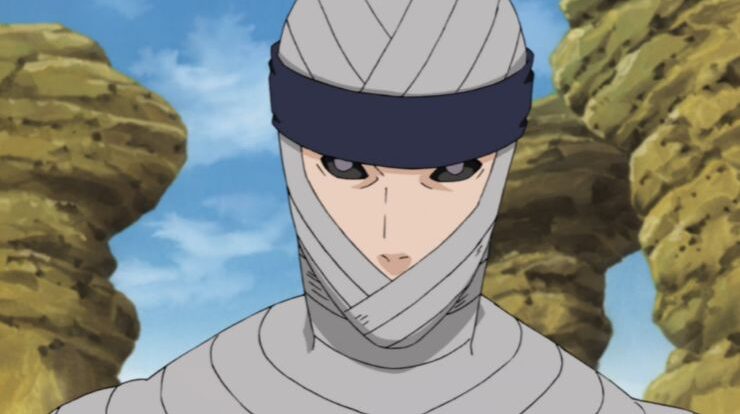 Mu could use all 5 Basic Nature Transformations. By combining Fire, Earth and Wind chakra natures, he could use the Dust Release Kekkei Touta to reduce whatever it touches into dust. With Earth Release, he could make his body light enough for flight. He was also capable of completely hiding his presence through the use of Water Release. His camouflaging ability was so great, he became renowned as the “Non-Person” a title which he gained for having neither a physical form nor detectable chakra while the technique was active.

Mu is unable to perform genjutsu techniques but possesses incredible chakra control to make himself immune to some of them. He managed to overcome Genjutsu’s clam illusion technique in his time with both having to kill each other in the end.

We never got to see Mu engage in any taijutsu battle even when he was reanimated in the war. Still, he was shown to possess great reflexes and coupled with his perceptions, he should be quite good in taijutsu. While alive, he was seen carrying a pair of swords, implying that he was also skilled in kenjutsu which is closely associated with taijutsu.

Asides from his immense sensory perceptions, Mu was shown to be incredibly reflexive in battle, capable of avoiding techniques that even other Kage found difficult to evade, even from his blindside. He managed to avoid getting trapped by Gaara’s sand from underground, he was capable of dodging KCM Naruto’s initial attack from blindside.

Mu was quite strong physically. Even with his power halved after splitting himself into two duplicates to help escape a lethal blow he was physically strong enough to lift massive rocks off his body. He may not be a physical monster, but he’s physically strong to a certain degree.

Mu appeared to be both extremely analytical and knowledgeable, being able to discern the exact method used to locate his position almost immediately after detection, seemingly without any prior information concerning the technique in question. He also apparently deciphered the mechanisms behind the Genjutsu’s Steaming Danger Tyranny and passed on the information to his student, as was later speculated by the Genjutsu himself.

Mu may not outrightly possess a physical form of defense but his methods of avoiding attacks are incredible. The first one is splitting himself into two duplicates to help escape a lethal blow, as seen when he managed to survive Naruto’s Planetary Rasengan. The other passive method that he uses to avoid attacks is by making himself invisible, while also making his chakra undetectable hence making it difficult even for sensors to locate his position.

We may not know much about Mu’s chakra and stamina but we have some info concerning them. Even as a reanimation, after splitting himself into 2 duplicates, his power was halved and because of this he was no longer able to perform his ultimate technique “Jinton”. It takes a lot of chakra of course but not being able to use it with half his chakra means his reserves/stamina are not that huge/special.

What Tier is 2nd Tsuchikage Mu?

Like I just stated, Mu’s Ninjutsu, Sensory Perceptions and Intelligence is what makes him very powerful. He has the ability to sense and react to attacks even from blindside, can make himself invisible, can make himself light enough for flight and worst of all possesses the deadly justu Jinton. If he’s high up there techniques that cannot be emitted will hardly get to him, even sensors would hardly detect his chakra unless they have other methods of sensing other than just chakra signatures. These alongside Jinton makes him lethal for anyone, so it would be fair if I put him alongside the likes of Kabuto, Killer Bee, Minato, Tobirama etc. So, “High Kage+” just above High Kage.

Due to all his abilities being tricky and “Dust Release” being a oneshot technique, Mu is a bad matchup for almost anybody unless they are fast enough, can sense his presence, have an attack that will get to him when he’s flying. I can see him beating, the 3rd Raikage. The Raikage is fast and can probably dodge some of his attacks but being able to make himself invisible, he can appear behind the Raikage before attacking and the Raikage likely being a non sensor will get hit by Jinton. I still see him losing to the likes of Kabuto, Minato, Tobirama. They all are sensors and he must become visible to attack, when he does even from blindside they would sense and are fast enough to evade his attack and they all have techniques that would get to him or can simply outlast him.

That is it from today’s post on How Strong is 2nd Tsuchikage Mu? If you do not agree with the points in the post and have some of your own opinions, share them with us in the comments section down below. Keep visiting Animesoulking for more information about Anime and Manga.

Chandan is the writer of “How Strong is 2nd Tsuchikage Mu?”. Also, Connect with me on youtube and Facebook.