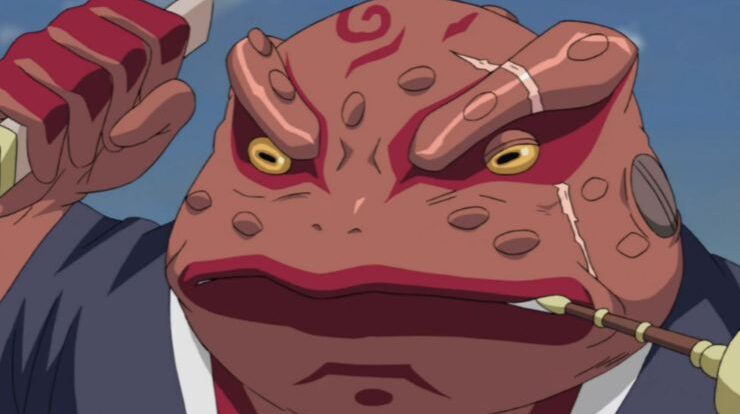 Baku, a gigantic elephant chimera is the boss summon of Danzo. It makes use of wind release to inhale everything within a large radius as well as exhaling them using its trunks. It was strong enough to carve out an opening on Sasuke’s Susanoo allowing Danzo to attack him head on.

Ibuse, the venomous salamander is the boss summon of Hanzo. Has fought alongside Hanzo against foes like the Legendary Sannin, Chiyo etc. It makes use of a poisonous substance which it releases in the form of mist from its mouth which renders the body of its victim numb moments after they inhale the substance. Could lead to paralysis and eventually death.

Gamaken is a toad that resides at Mount Myoboku. A really powerful toad whose fighting style revolves around taijutsu and he possesses a weapon for attack and a shield for defense. Proved capable of battling against Pain’s numerous animal summons for quite a long time during Jiraiya’s battle against Pain. Was strong enough to fend off Pain’s summons in order to buy time for Jiraiya to call forth the 2 Great Toad Sages.

Aoda is a snake that resides at the Ryuchi Cave and it was/is the personal summon of Sasuke Uchiha. Being a snake it is incredibly fast and mimble proving capable of gliding through an army of Juubi Clones as well as evading their attacks with ease. Strangled and tossed away without difficulty the biggest clones of the Juubi. Physical Strength close to that of Manda.

Gamakichi is the eldest son of Gamabunta. By the 4th Great Ninja War, he had become very powerful and even comparable to his father. He could easily deflect multiple projectiles from the Ten Tails and just like his father could leap across enormous distances in a short time. Asides from this he seemed to have mastered senjutsu, capable of using techniques like the Starch Syrup Gun which he fired towards Obito paving the way for the latter’s weakness to be discovered. He could also use water and fire release.

Katsuyu, the slug is the boss summon of Sakura and Tsunade residing at the Legendary Shikkotsu Forest. She is capable of spitting acid, toxic enough to melt through rocks with ease. Can split herself into smaller clones to evade attacks and for other small functions and could reform herself if need be. Her main function however is protection and healing. Her incredible resistance allowed her to protect thousands of Konoha Shinobi from Pain’s attack and in the war arc healed thousands.

Gamabunta is the chief toad at Mount Myoboku. He has been the boss summon of several toad sages; Jiraiya, Minato, Naruto. One of the most powerful boss summons in the series, very skilled and experienced and capable of battling against the 1 Tailed Beast Shukaku. He is very fast, could leap great distances and wields a giant sword which he uses proficiently. During Minato’s time as the Hokage he was powerful enough to temporarily restrain the almighty 9 Tails.

Manda is a very powerful snake and initially the boss summon of Orochimaru. Strong enough to battle against Gamabunta and Katsuyu simultaneously and even overpowering them. Very fast and resistant to attacks capable of saving Sasuke against Deidara’s most powerful attack “C0” although this came at the cost of his own life.

Enma was the summon of Hiruzen Sarutobi. An incredibly powerful summon, highly experienced and knowledgeable of various ninja techniques. Taijutsu and Strength enough for him to engage in a hand to hand combat against the Edo versions of Hashirama and Tobirama and incapacitate them. Could transform into a staff as hard as adamantine and capable of pushing the 9 Tails out of Konoha. He was very crucial in the defeat of Orochimaru.

Manda II is an enhanced clone that was created from the original Manda’s cells using various drugs by Kabuto. It is bigger, stronger, and has far more acute senses than the original. It’s strength was such that, it slowed down the Giant Island Turtle with ease, yanking it back and it was able to quickly kill the Giant Squid, leaving a giant bite mark on its head.

Known as Ma and Pa are the Two Great Toad Sages residing at Mount Myoboku. They are immensely powerful capable of using Sage Mode. They are the sage teachers of; Jiraiya, Minato and Naruto. They could use wind, fire and water nature transformations as well as several senjutsu based techniques including a lethal sound based genjutsu “Toad Confrontation Chant” capable of confusing, paralyzing and immobilizing the opponent. This genjutsu allowed Jiraiya to take down 3 Pain bodies. For me the strongest Animal Summon in the series.

That is it from today’s post on Top 11 Strongest Summoning Jutsu Animals. If you do not agree with the points in the post and have some of your own opinions, share them with us in the comments section down below. Keep visiting Animesoulking for more information about Anime and Manga.

Chandan is the writer of “Top 11 Strongest Summoning Jutsu Animals”. Also, Connect with me on youtube and Facebook.