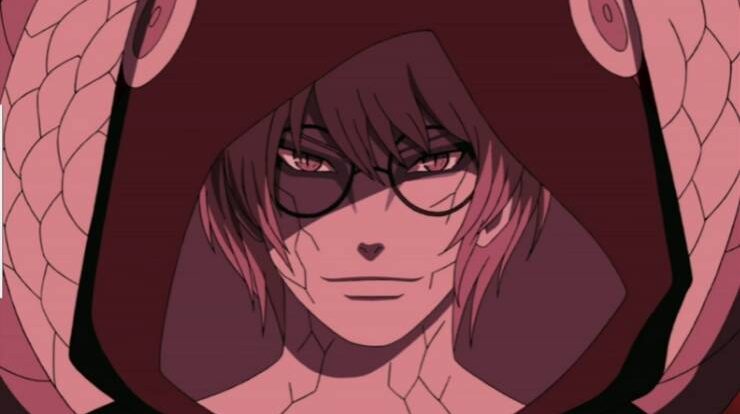 Kabuto is a Ninjutsu Master able to use water, earth and wind release nature transformations. By the time we saw him in Part 2 he had acquired all kinds of techniques; able to use the abilities of other shinobi: Jugo’s Cursed Seal, Sakon and Ukon’s Kekkei Genkai, Kidomaru’s Spider Techniques, Tayuya’s Genjutsu, Kimimaro’s Shikotsumyaku, Suigetsu’s Hydrification Technique etc. All these alongside his very own Senjutsu Techniques, Summoning, Edo Tensei as well as Medical Ninjutsu.

Kabuto through his body modifications was able to make use of Tayuya’s Sound Genjutsu. It was even more powerful since it was enhanced by Sage Chakra and it was strong enough to affect Sasuke and Itachi with both having to work together using their Dojutsu to break out of it. Kabuto can also make himself immune to Genjutsu by blocking his line of sight and since he is completely adept with his surroundings due to Senjutsu, he can battle against his opponents without having to look at them directly as seen against Itachi.

Kabuto proved that his Taijutsu greatly benefited from being able to use Sage Mode. With increased sensory perceptions and reactions, he was able to battle and keep up against Itachi (who was himself very skilled in Taijutsu) in their many closed quarters scuffles and all these while making sure to avoid direct contact with the latter.

Kabuto showed immense movement speed and reactions in his battle with Itachi and Sasuke. He wasn’t just capable of keeping up with Itachi who possessed the Mangekyo Sharingan but could land many hits on him. His speed and reactions allowed him to dodge Sasuke’s Susanoo Arrow, which is fired at an incredible speed and almost if not impossible to dodge if one is not very fast.

Sage Mode should normally increase the user’s physical strength as much as the other physical aspects so, Kabuto should be quite physical. However, it didn’t appear as though he’s physical monster as it is with some other Sage Mode Users in his battle against Itachi. The latter could still block or parry his physical attacks without too much trouble. Strength isn’t something to speculate on; because we’ve seen a Sage Mode User with immense strength doesn’t mean we scale another user without high end feats in the same way.

Kabuto is obviously among the most intelligent/smartest characters in the series. In his time with the Anbu, as a spy for Sasori and under Orochimaru, he acquired vast knowledge about the world making him one of the most knowledgeable shinobi. He was also very innovative, able to master Sage Mode, improve Edo Tensei to the point where shinobi were reanimated at close to their full power. He doesn’t lack in battle strategy either as he was capable of turning the tide of the entire Fourth Great Ninja War in his favour.

Through his numerous experiments, Kabuto successfully created a version of Suigetsu’s Hydrification Technique which allows him to escape capture and avoid injury by liquefying his body. He will therefore be invulnerable to most attacks. He can also use Orochimaru’s Oral Rebirth Technique to shed his skin and escape attacks that are otherwise fatal.

Kabuto can summon snakes to aid him in battle in varrying sizes some capable of absorbing chakra and others able to morph into copies of himself. He was able to create an even more powerful boss summon of his own “Manda II” said to be stronger than the original Manda and it was capable of immobilizing Turtle Island.

Kabuto was able to infuse himself with the remains of Orochimaru’s Body, which granted him a larger and stronger reserve of chakra. This will allow to master Sage Mode, a technique which requires huge chakra reserves and use Edo Tensei repeatedly without running out of chakra.

As with chakra, Kabuto’s stamina also improved considerably after his body modifications. He didn’t get tired after summoning dozens of Edo Tensei Shinobi and using them to battle in the war. He still had the necessary stamina especially after being revitalized by Sage Mode to battle against the Uchiha Brothers Itachi and Sasuke.

From his ratings, we can see that Kabuto is a well rounded shinobi, being up there among the best in every area. This tells us that he’s pretty powerful in Sage Mode. Let’s continue to determine how strong he really is.

In Which Tier is Sage Mode Kabuto Yakushi?

We know that Sage Mode Kabuto was able to take-on both Edo Itachi and EMS Sasuke at the same time and give them a lot of trouble. However, we also know that the brothers were making sure not to kill him and thus were holding back and he had location advantage but we can also say Kabuto was making sure not to kill Sasuke. Kabuto has Genjutsu and White Rage that are dangerous to anyone 1vs1 plus all the other abilities he has. Overall I will say Sage Mode Kabuto, EMS Sasuke (in that battle) and Edo Itachi are around the same level. I think he’s past High Kage and is getting closer to top tier (Nagato, BM Naruto) but not there yet. I personally call it “High Kage+” which has the likes of Killer Bee, Minato, KCM Naruto, Edo Itachi etc.

Kabuto definitely can beat most of the people who are in the same tier as him more times than he loses to them. He should even be closer to the top tier than most of them. I personally see Kabuto defeating Pain especially if we look at his arsenal. Edo Itachi beats him as we saw in canon although without Izanami it could have a different outcome. Killer Bee should also beat him; Genjutsu and White Rage would be overcome by partner method and Bijuudama can still put him down even with hydrification.

That is it from today’s post on How Strong is Sage Mode Kabuto Yakushi? If you do not agree with the points in the post and have some of your own opinions, share them with us in the comments section down below. Keep visiting Animesoulking for more information about Anime and Manga.

Chandan is the writer of “How Strong is Sage Mode Kabuto Yakushi?”. Also, Connect with me on youtube and Facebook.